Just How Dependent Are You on Your Phone? (Infographic)

Be honest, how much do you love your smartphone?

The answer, according to consulting firm Deloitte, should sound like something a couple in love might say: More and more each year.

Deloitte released its latest Digital Democracy Survey this week, which explores how Americans consume and interact with media. The survey polled 2,000 people and broke them into five key age groups: Trailing Millennials (14-24), Leading Millennials (25-30), Xers (31-47), Boomers (48-66) and Matures (67 and over).

Related: Time for a Talk: Don't Let Your Phone Be a Selfish Boyfriend (or Girlfriend)

The results showed that while laptops are still the go-to for tasks where money is involved -- like online banking and shopping -- smartphone and tablet use is on the rise for both. To that end, 68 percent of consumers say that peer reviews and recommendations on social media have a "high or medium level of influence over buying decisions."

The survey also found that smartphones are the most sought after mobile devices for people aged 14-30 and 55 percent of households in the U.S. have at least one. And more millennials are viewing their favorite shows on their mobile devices; 5 percent reported watching TV on their smartphone in 2011, while 25 percent said the same in 2012. Millennials' television viewing on tablets made the jump from 2 percent in 2011 to 25 percent the following year.

Related: Bye Bye BlackBerry: Which Smartphone Should President Obama Use Next?

Tablets also saw a big popularity boost in 2012, with a 177 percent increase in ownership. Thirty percent of all age groups ranked them as their "most valued device." Thirty-two percent of Boomers and 31 percent of Matures agreed with this statement, a sharp contrast from 2011 when Deloitte said the base size was too insignificant to list.

For more information about generational media preferences, how many people are "digital omnivores" (they own a tablet, laptop and smartphone), and the value of having consistent internet access (93 percent say it’s the most important "household subscription") check out Deloitte's full survey and the infographic below. 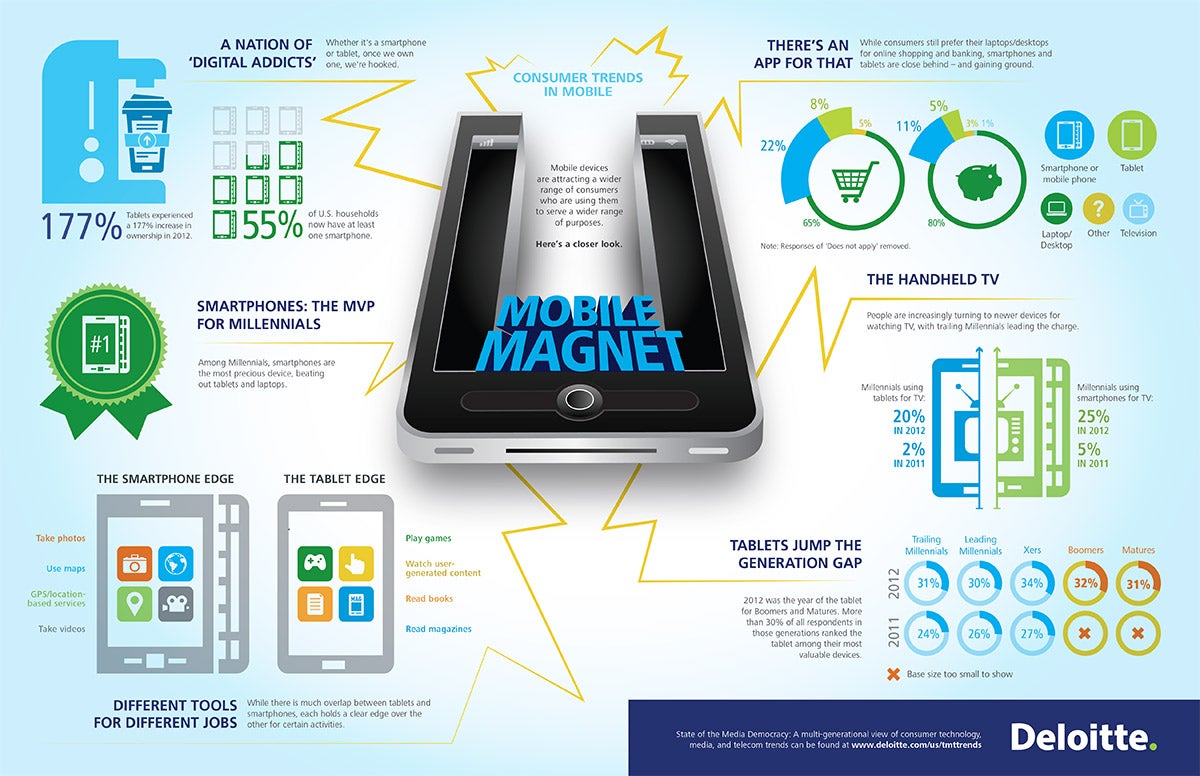