His opening salvo in the fight for an industry whose practices can be expensive and unsustainable is mayonnaise – or Just Mayo, to be exact.

The egg-free, plant-based version of the unassuming condiment is just one product Tetrick has launched through Hampton Creek Foods, the company he founded in 2011. And it's just one step toward his broader mission: To replace the traditional egg for good.

Related: BrusselKale: The Trendiest Superfood of All?

The idea for a plant-based egg (called Beyond Eggs) was driven by Tetrick's desire to bring healthier, more affordable food to the world. Tetrick, who has worked in environmental law, spent much of his early career in Africa, through a Fulbright scholarship that led him to Nigeria and South Africa, as well as stints working with the U.N. and the government of Liberia.  As he worked in the region, he became increasingly frustrated by what he saw in front of him when it came to feeding the hungry.  While solutions provided by the non-profit and government sectors were well-intentioned, they did not make the impact that he felt was really needed.

Talking with his childhood friend Josh Balk, director of corporate policy for The Humane Society's campaign for the protection of farm animals and livestock, Tetrick tried to figure out how he could effect change. "It occurred to me that there was this bizarre lack of innovation in the food industry…really the only innovation in food was potato chip companies searching for the perfect crunch."

Related: Transparency: How Whole Foods Is Doing It Right (And You Can, Too) 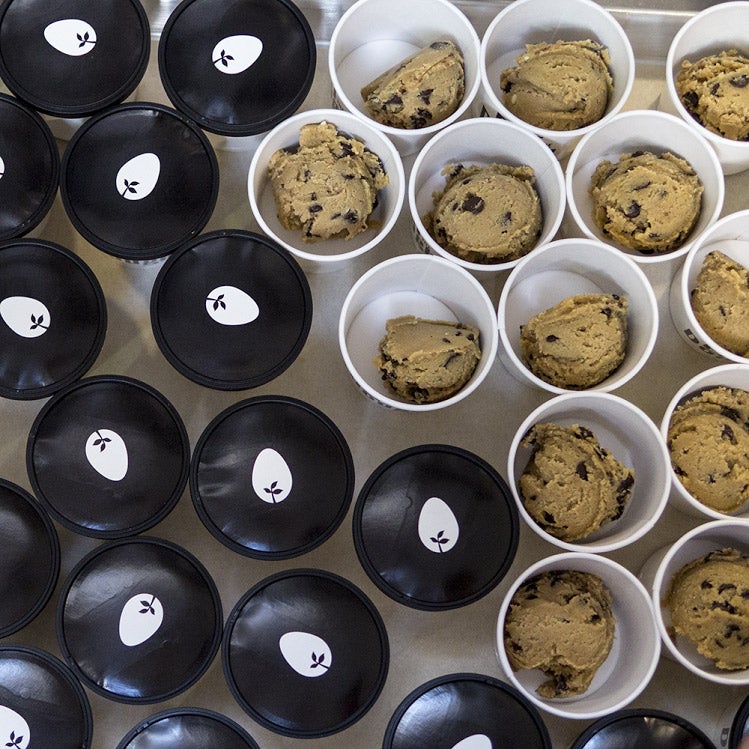 A batch of Eat the Dough.
courtesy of Hampton Creek

Tetrick says he knew there was more he could to change the food industry. Why focus on the egg?  Tetrick says that it was the egg's sheer ubiquity in the products we consume every day without even realizing it. And when it comes to expense and sustainability, he noted that taking eggs out of the equation is "an outstanding lever to pull to get costs down."  Tetrick's reasoning is that the process of cultivating plants is less expensive than raising the cheapest battery cage egg.

"The ingredient in Just Mayo is roughly 48 percent less than battery cage eggs," says Hampton Creek's communications director Morgan Oliveira. "And that's because 70 percent of the cost of a chicken egg comes from the feed [and] water for the chickens."

Hampton Creek's Just Mayo is currently sold at Whole Foods. It also recently launched at Costco stores in Colorado and will be arriving in Safeway supermarkets in April. The company is also planning to market on Hong Kong's Park 'n Shop, a digital grocery store that sells more than 9,000 products.

So how do you replace a food that has such a stronghold in both the marketplace and palate? A lot of trial and error. Tetrick says that in order to make a major change, he and his team first had to throw out the big business playbook. "We just started focusing on the science. But we realized that you can't win the day with bio-chem alone. We needed food scientists and chefs, and a whole bunch of different characters doing their thing every day." 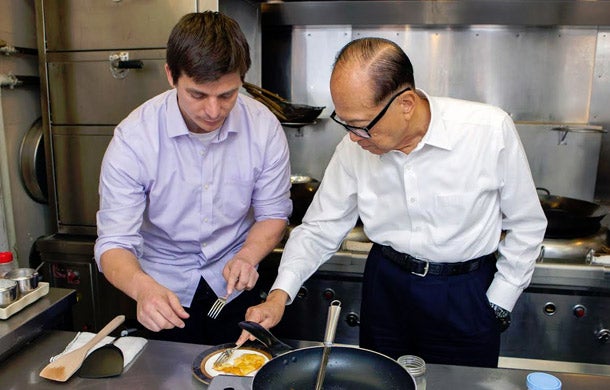 Tetrick described the intensive prototyping process.  "We source plants from over 40 countries around the world. Western Canada and the Midwest is where most of the plants we currently use are from. A little over 3,000 plants were tested, and we found 11 that are really phenomenal. It's just something about the Canadian yellow pea."

Hampton Creek's team of scientists proceeded to run series after series of protein gels to hone in on the plants that substantially matched up with egg protein. Oliveira said that while 8 percent of plants have been utilized for food, the other 92 percent haven't been explored in depth up until this point. She also likened the laboratory process to that of a tech or software company.

Tetrick agreed. "The heart of Amazon is this technology for sorting and logistics…Amazon started with books because it was a great model for their technology.  We started with mayo because it's really hard to do without the chicken egg…in five years we'll think about something else, but this is an incredibly large market with a lot of opportunity."

Over the next several months, customers can expect new Just Mayo flavors (chipotle, garlic and sriracha) and the public release of Just Scrambled, the company's scrambled egg substitute, and egg-free cookie dough, Eat the Dough. The company is also building partnerships with several Fortune 500 companies to be announced at a later date. With the $23 million Series B funding that was recently raised in February, the company is looking to expand.

It isn't only about getting the company's products on grocery store shelves, but about sharing its mission with others. Although that message never includes the word "vegan." "We think the word doesn't serve a positive function for us. We literally wouldn't be doing this if most people were eating that way. As much as possible, we stay focused on regular people, like my dad."  Besides, he says, "no one would ever call ketchup vegan."

Related: Room to Grow: A Look at the Changing Landscape of Green Startups

Oliveira says she thinks Just Mayo has caught the way it has because "we tell a story with it."  Indeed, the man and little girl shown cooking when you click over to the company's website is Hampton Creek chef Chris Jones and his daughter.

Tetrick also spoke about how Hampton Creek is working with a foundation called More than Me.  Based in Liberia, it is a nonprofit that works to get at-risk young women off the street and into school. Hampton Creek is working with the organization to build a bakery, and teach the young women of the region about entrepreneurship, marketing, distribution and more. Tetrick is also looking forward to speaking more at colleges and universities and talking with students about how they view food service.

The ideals of science and education are tied together by the value Tetrick and his team place on radical openness and the belief that people should ask as many questions as they want about their food. "The heartbeat of our company is figuring out smart and effective ways to make food healthier and sustainable, whether you're shopping at the largest retailer or at the fast food restaurant or at the university dining hall," he says. "We don't have to make it difficult to help people eat in a way that's better for the world; we can build into the system. What would happen if you just made it ridiculously easy for regular people to do good things?"

Related: How an Ordinary Person Can Create Extraordinary Change