A Highway Illuminated by Glow in the Dark Paint, Not Streetlights

By Laura Entis April 14, 2014
Opinions expressed by Entrepreneur contributors are their own.

When you think about innovation, what comes to mind? Your iPad? 3-D printed houses? A fully connected car?

Daan Roosegaarde, a Dutch interactive artist, has made a career taking everyday items that are generally overlooked when we're asked the above question, and giving them visually stimulating upgrades. Past projects include a dance floor with build-in disco lights powered by dancers' foot movements and a dress that becomes see-through when its wearer is aroused.

For his latest project, he takes on the highway. Teaming up with the Dutch civil engineering firm Heijmans, Roosegaarde has illuminated a 500m stretch of highway in the Netherlands with glow in the dark paint.

Related: Beyond Novelty: Architects in Amsterdam Are 3-D Printing an Entire House

Like in many of Roosegaarde's projects, the technology involved is elegant, rather than cutting-edge. The glowing lines are created using paint mixed with a "photo-luminising" powder, a substance that charges up in the sunlight and releases a green (almost radioactive) glow at night. It's both eerily beautiful and cost-efficient, as the paint eliminates the need for expensive streetlights.

Originally, the project – dubbed The Smart Highway – included plans to use temperature-sensitive paint markers to indicate weather conditions. If temperatures fall below a certain point, glowing snowflakes will appear on the road's surface to warn drivers of potentially slippery conditions. Once the temperature rises above freezing, the snowflakes disappear.

Related: The Makers of This Solar-Powered Technology Want to Eliminate a Global Sanitation Issue 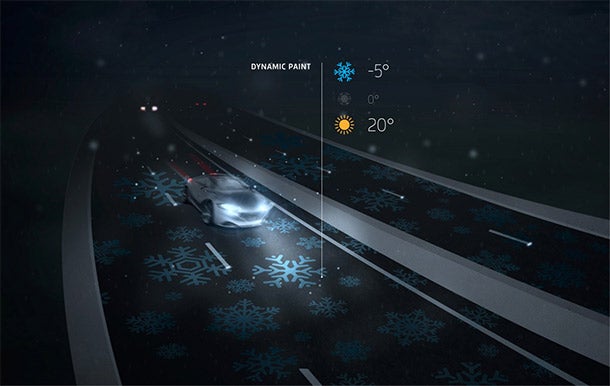 "I'm not so interested in design, to be honest. I'm more interested in reforming things," Roosegaarde says in a video explaining the project. "How can we make truly interactive and sustainable environments which connect people? When you look at highways, why is it that so much time, energy and money is spent on cars when the actual roads are stuck in the Middle Ages? Why can't we develop paint that charges during the daytime and gets light at night?"

Well, he's done it. While the glow in the dark strip of highway is still a pilot project (and does not include temperature sensitive markers), the BBC reports that it could be rolled out internationally later this year.

Related: Skin and Bones: Oh, the Body Parts You Can Make With 3-D Bio-printers