By Neil Parmar May 6, 2014
Opinions expressed by Entrepreneur contributors are their own.

Can anything make buyers trust real estate agents? A new startup for the housing industry is hoping its service will do just that.

Giveback Homes, which launched in August, is a network of real estate agents, home builders, mortgage brokers and interior designers. Members pay $50 each month to get listed on Giveback Homes' website and receive marketing support. Individuals then decide how much, and how frequently, they want to donate to a good cause—an amount that is typically cut from commissions they earn by helping to buy or sell a home, for example. All of the donations—$56,000 raised, to date—have been passed on to the nonprofit group Habitat For Humanity to help build 12 homes in Nicaragua and put toward future houses set for Dallas and Los Angeles.

Blake Andrews says he conceived this venture after working at TOMS Shoes, another for-profit social enterprise, which donates a pair of shoes to someone in need for each one sold. That particular company is run by Blake Mycoskie, who happened to play tennis with Andrews for a few years when they were young boys. After losing contact for 18 years the men ended up on the same fishing trip several years ago, where they recognized each other and Andrews learned more about Mycoskie's one-for-one business model. A couple of years later, when Andrews was working in his family's beer business, he says he called up Mycoskie to transition into a more "fulfilling" career from the ground up. Soon, he was working at TOMS Shoes, where he stayed for a few years in various roles. (TOMS Shoes did not respond to a request for comment.)

More recently, Andrews discovered that his real estate agent and others in the trade often donated a portion of their commissions to charitable causes but didn't always know exactly where their money was going. "There are 2 million real estate agents in the U.S. and no way to differentiate yourself," says Andrews, 39. "Giveback Homes makes it seamless for our members to become humanitarians and turn their clients into humanitarians as well while building homes for families in need." 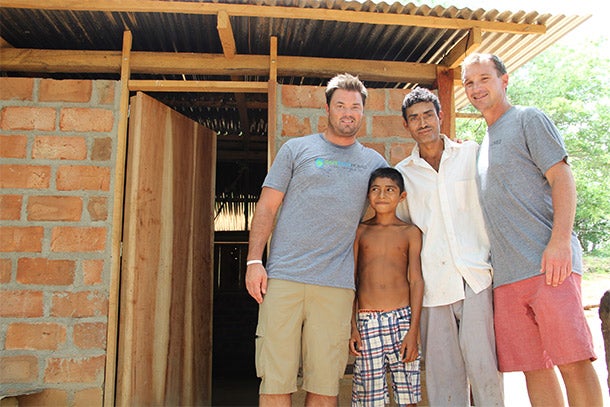 Can Giveback Homes help on the reputational front? It couldn't hurt. In one recent survey, Choice Home Warranty found that more than 67 percent of Americans said they didn't trust real estate agents. In the land down under, Aussies rank real estate agents 28 out of 30 when it comes to the most ethical and honest professionals—ahead of just ad men and car salesmen, according to Roy Morgan Research.

Meanwhile, Giveback is working to stand out itself. Some agents have already printed off between 800 and 2,000 door hangers to advertise their affiliation with the social enterprise, which has led those agents to a handful of clients.

Some high-profile clients have also helped boost contributions and visibility for the startup. Richard Jefferson, an NBA player for the Utah Jazz, had long worked out with Giveback Homes' first member, Nick Schneider, and heard about the agent's multiple contributions toward building homes in Nicaragua. When Jefferson sold his San Diego home two years ago and recently moved to L.A. he used Schneider.

"Everyone in the southern part of L.A. is some sort of real estate agent," says Jefferson. "I knew Nick and multiple other agents in the area [and] I thought there has to be a way to help other people versus being in a bubble of how much can we flip a house for or buy it for."

All told, Schneider, 35, says he's donated close to $20,000 toward the construction of six homes, including $5,000 from a 2.5 percent commission cut from the purchase of Jefferson's multi-million dollar home. Although contributions like these are small relative to home prices, "when it comes to giving back, every dollar counts," says Rumeet Billan, a colleague of mine at Humber College in Toronto who introduced and taught a course on social entrepreneurship. "To be a social enterprise, there is typically a percentage that goes towards the social cause… but this is different," she adds. "People want to work with organizations that are giving back."

Even so, some consumers may be skeptical of social businesses that do not require a minimum level of contributions. In these cases, execs like Andrews can take other steps to help consumers "determine the difference between good marketing and a good company," says Trish Nixon, a senior associate at the MaRS Center for Impact Investing in Toronto. "Diligent reporting on impact metrics can help ventures mitigate risks around perception and transparency."

While Giveback Homes has yet to break even—"we're far from it," admits Andrews—it isn't looking to ramp up its membership to just anyone in the homebuilding community. The company has 100 members currently and plans to keep rosters limited, accepting only 20,000 members in the U.S to avoid diluting membership. "I'd rather have less membership, because they're willing to give more, instead of 2 million members and only 10,000 or 20,000 are really giving back."