You don't need a black belt to work at Organic Motion--but it might help. "We have a [quality assurance] guy we brought in who does kung fu," says Evan Simeone, chief product officer for the New York City-based company, a specialist in motion-capture technology, which records movement and translates it into three-dimensional digital imagery. "He tests the system doing all these jumps, kicks, flips and things like that ... and we're tracking all of it."

Traditionally used in movies and video games, motion capture creates 3-D data that can be altered and manipulated. It's the same type of technology--typically achieved by filming actors in spandex suits covered in "markers" that look like ping-pong balls, identifiable by image-processing software--that gave life to Gollum in The Lord of the Rings trilogy and created the lanky, blue aliens in Avatar.

Organic Motion, however, has developed a "markerless" solution called OpenStage that uses multiple cameras and advanced algorithms to capture and display motion data in real time, without the need for special suits or elaborate setups. 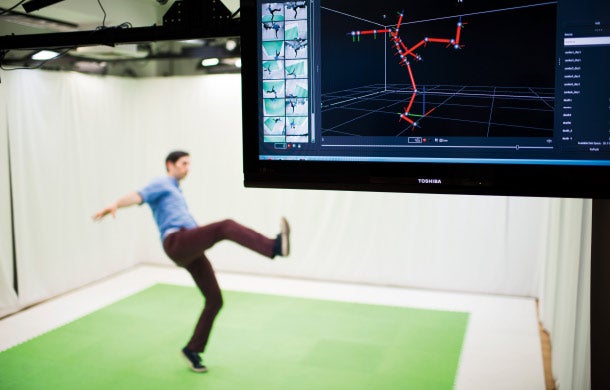 OpenStage streamlines the motion-capture process, which can take days of planning with traditional marker-based sessions, Simeone explains. First, an artist sketches the desired movements. Next, a director, technician and performers enter the motion-capture lab, where performers don suits covered with individually calibrated markers. Finally, the motions are captured--but if a mark is missed or choreography changes, the process starts over again.

"These cumbersome setups were outdated when you look at what's possible with modern computer vision, software development and modern computing systems," says Organic Motion founder and CEO Andrew Tschesnok, who spent four years prototyping OpenStage. "There are huge advantages across different vertices by not having to put on the suit."

Using a 30-camera OpenStage setup for six months, the game's developers discovered that animations that had previously taken three or four days to complete could be made in a single day. Ultimately, the increased speed yielded a 30 percent drop in animation costs--a boon for the title, which sold 3.5 million copies in its first six months.

Tschesnok says such successes helped Organic Motion--which has secured $15 million in funding--achieve a 300 percent increase in revenue in 2013 over the previous year. He says the company's pricing is "mid-tier" for the industry but declined to reveal exact rates, explaining that each project is custom-tailored to the customer's needs.

Organic Motion is also making waves in other sectors, such as athletics, by allowing trainers to monitor performance and prevent and treat injuries; healthcare, where applications include diagnosis of movement disorders; and the military, where the technology can be used for training and simulation exercises. Distribution partner Dynamic Athletics of Lenexa, Kan., sells Organic Motion's hardware as a front end for its own movement database, a system that manages and processes kinetics to create a record or time capsule of the subject's abilities--in other words, the same technology that makes Batman throw a roundhouse punch can trace the progress of stroke victims in rehab. Other Organic Motion customers include companies like Hamilton Healthcare and research institutes like New York University.

"We want to really win in the gaming market," Tschesnok says, "but we have our feet everywhere, from medical to gaming to film to interactive systems. We're even in museums."

Motion capture has been around for decades, but advances in the technology are finally making it accessible for small businesses. Jeff Beran, owner of Scottsdale, Ariz.-based Evolution Physical Therapy, has been using the technology to track patients' motion for almost three years. "It is intensive to set up, but the data that you get from there is pretty valuable--especially when you can use it the way we use it, as a baseline," he says.

Beran doesn't employ a markerless system; instead he uses Biosyn Systems' functional assessment of biomechanics, which detects motion through 17 sensors strapped to the subject's body. The technology is small enough to fit in a briefcase and does not require any special setting or green screen. He uses the system on 20 to 25 percent of his patients--from professional athletes to average Joes--showing them how their movements can prevent injuries and help the healing process.

"If you can show someone without having to tell them, they just have their own 'a-ha' moment," he says.

Beran charges between $225 and $250 per hour for the service (his standard rates, without motion capture, run $130 to $215). "People are looking for ways to stay healthy and get better faster," he says. "Patient education on how they move--and seeing themselves move accurately--that really changes things more than a lot of the therapy." --J.P.P.