By Jane Wells June 23, 2014
This story originally appeared on CNBC

We spend a lot of time in the bathroom. It's a happy place. Yet most public restrooms repel rather than attract, though, like a tetanus shot, when you need one, you need one. It cannot be avoided.

Talk about fertile territory for entrepreneurs. Two new bathroom start-ups may have you wondering, "Why didn't I think of that?"

First, there's Tooshlights, the brainchild of Los Angeles musician Allen Klevens. He knew that patrons at the Hollywood Bowl wished there was a faster way to get through long bathroom lines during intermission. Then Klevens and his business partner visited a nearby mall and saw a lighting system in the parking structure letting drivers know what spaces were available. "We both looked at each other and said, 'Wow, what a perfect idea.'" 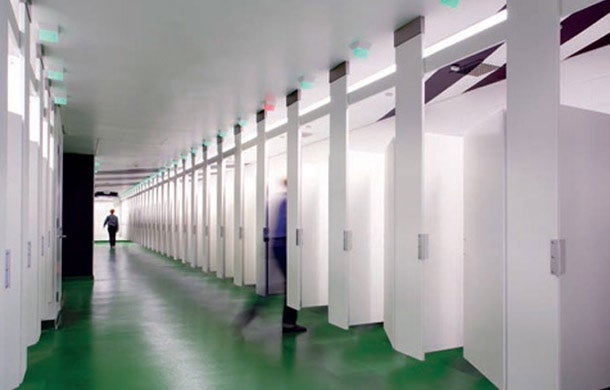 One year later, Tooshlights has launched. It's debuting for the Hollywood Bowl's summer season. Klevens said three other installations are in the works at other venues.

The Tooshlights system works like this: Each bathroom stall has a green light above it. When you enter the stall and push the latch to lock yourself in, a wireless signal turns the light red. Unlatch the door, and the light goes back to green. This way, anyone standing in line can see which stalls are occupied and which are empty. No more bending over to look for feet under the door.

Klevens said the lights work correctly "99 percent of the time." Someone does have to actually push the latch to turn the light red. "If you're stupid enough to not lock the bathroom door, you deserve to get walked in on."

The system is not cheap, costing $350 to $500 per stall to install. "We're not only providing the light," Klevens explained. "We have the ability to provide the data to the facilities to let them know the flow of traffic and where people go, what time they go to the bathroom, so that they're able to build their business—whether it's concessions, whether it's selling T-shirts, beer, coke, etc., outside—to gear them to which restroom to go to."

Read More: Welcome to the pork-cooking center of the universe

Up next is a Tooshlights app built into a venue's overall app which tells people where the closest bathrooms are and how many stalls are available.

In the meantime, a second start-up focuses on what you need once you're actually inside a stall. Jill Beck is a tennis pro and Ann Rommel is a former marketing executive who've created Freshends, which are high quality, flushable, alcohol free wipes for, well, down there. "People used to use the Sears catalog to wipe themselves," said Beck. "We've come a long way."

Beck got the idea for Freshends after a friend from France was visiting and asked how one could freshen up in a country without bidets. Rommel came on board after noticing what Beck was working on, "and I thought, 'Oh my gosh, this is brilliant.'"

Freshends now has more than 200 commercial clients, including several private jet centers and high-end hotels. Business has more than doubled in a year. The wipes are individually packaged and can be placed in a small dispenser. While most are sold in bulk to facilities, consumers can also buy them online. "A lot of people think of it as possibly a feminine product, and we have more men order our product online than women," Beck said.

Read More: Meet the marijuana mavens, the women of pot

At first, they discovered that pitching Freshends required walking a fine line between bluntness and delicacy. Twenty minutes into pitching the product to a country club general manager, he still thought they were describing hand towels.

"If you were going to call and start talking about butt wipes, which is basically what we're selling, it's very difficult," said Beck. She recently discussed the product with the general manager of a hotel inside a restroom. "I was going to show how the dispenser is on the wall, so I actually sat down on the toilet, and after a little bit, I thought, you know, maybe it's time for me to stand up."

Both the creators of Freshends and Tooshlights share the same passion all small business creators have, though in this case they're consumed with taking care of business in helping people take care of business. "When you start a business like this, it's on your mind 24/7," said Ann Rommel. "It's really hard to kind of pull back a little bit and not drive your friends nuts."

"I've definitely been an entrepreneur my whole life," said Tooshlights' Klevens, who previously created and sold a company that provides background music. "It allowed me to invest in something that I truly am in love with right now," he said, standing in the women's room at the Hollywood Bowl, "which we're looking at."