Work, Eat, Sleep: How These Products Are Trying to Improve Your Daily Grind

By Laura Entis
Opinions expressed by Entrepreneur contributors are their own.

Time is constantly ticking away from us. No matter how long our to-do lists grow, we're only allotted 24 hours a day, which can make balancing work and family obligations while maintaining a healthy lifestyle feel like a cruel puzzle where the pieces don't fit.

Here's a radical idea: What if we could lead a healthier life not by doing more, but by updating what we're doing already?

Imagine if your desk corrected back pain. Or if your mattress improved your memory. What if, in lieu of just a number, your scale provided a comprehensive reading of both your activity and overall health and fitness?

There's no easy one-stop solution to better work/life balance, but here are three updated versions of every day items – a desk, a mattress and a scale – that made us stop and consider: How much time and energy could be saved if, instead of detracting from our health, the tools we used to go about our daily activities added to it?

From morning commutes in the car, to 8-plus hour days at a desk in an office, to couch time in front of the television, the majority of us spend the majority of our days seated. Unfortunately, as with most things, sitting is best when done in moderation (take a seat, and calorie-burning plummets to a rate of one a minute, which helps explain why over sitting increases the risk of obesity and type 2 diabetes).

A few years ago the Mayo Clinic coined a term for the epidemic our collective over-sitting is wreaking on our health: it's called, appropriately, sitting disease, and most of us have it. According to the Mayo Clinic, if the average American cut daily sitting time in half (down to less than 3 hours a day), his or her life expectancy would increase by two years.

An additional two years. Pretty compelling reason to sit less, right? Still, for many of us, it's not compelling enough: packed work schedules make it nearly impossible to find the time, much less the energy, to walk away from our computers, and so we sit even when we know it's bad for us. Perhaps the solution, then, isn't walking away from the desk but changing the desk itself.

Enter Varidesk, an adjustable-height desk that allows you to periodically shift from sitting to standing throughout the workday. While the concept of a standing desk certainly isn't new, Varidesk aims to make the device cheaper and easier to use than traditional models.

The concept started in the spring of 2012, thanks to a coworker's pinched sciatic nerve, says Jason McCann, president of Varidesk's parent company Gemmy Industries, a holiday item and décor producer perhaps most famous for novelty items such as the Big Mouth Billy Bass. "He literally had a pain in the rear, so we started testing we were trying different kinds of chairs." Nothing worked, and so the company ordered a standing desk. At $2,000, not only was it expensive, McCann says, but it was a whole additional pain in the ass to assemble.

On a whim, McCann, with the help of a design team, built a prototype for a desktop riser that was both affordable and intuitive to use. (This, by the way, was months before the Mayo Clinic declared a war on over-sitting: When an article came out in The Wall Street Journal announcing the news, McCann remembers thinking, "This is a sign from God.")

After multiple iterations and improvements, that initial prototype morphed into a computer riser that rests on an existing desk. It comes fully assembled, and retails for $275 to $350 depending on the model.

McCann says he's sold tens of thousands of Varidesks (customers include over 200 of the Fortune 500.) Word of mouth remains the biggest driver of sales, although McCann admits that for early adopters, standing at work can make for a slightly a slightly awkward experience, at least initially. 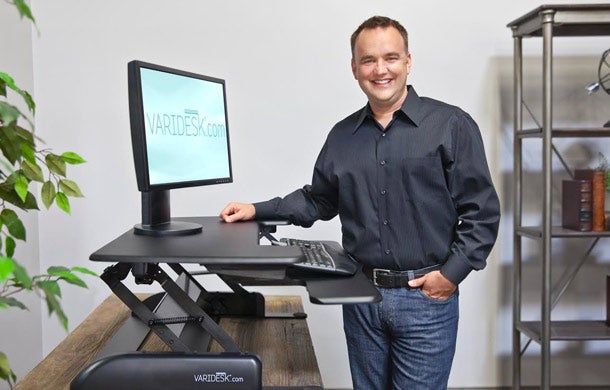 "I call it the lone soldier – you're the only one standing in the middle of a cube farm," McCann says. "It's like Whack-a-Mole."

Related: How to Get a Workplace Wellness Program for Your Office

But more often than not, that "lone soldier" will lead his or her co-workers to adopt standing desks as well, sparking a company-wide trend.

McCann loves hearing from customers on the way the product has impacted their energy levels and their health. The best thing about the desk, he says, is that you can easily transition between sitting and standing throughout the day (Remember: too much standing isn't good for you either). "We typically recommend standing for 15 minutes an hour at first, but a lot of people end up switching to 45 minutes an hour," McCann says. "They end up standing a lot more than they ever thought they would."

We all know sleep important. Research confirms that a lack of it impacts the body on a systematic level, disrupting everything from our metabolism to our immune system. And those are just the physical repercussions; not only does sleep deprivation make us, unsurprisingly, less alert, but it also increases our susceptibility to lapses in memory and impulsive behavior. Our creativity suffers, and we become increasingly distractible.

It's worrying, then, that by some estimates over 50 percent of the U.S. adult population is chronically sleep deprived.

Martin Rawls-Meehan, the founder and CEO of Reverie, thinks he can help improve sleep quality by customizing what we're sleeping on.

Reverie sells "sleep systems,' which are, essentially, glorified mattresses. Each sleep system is tailored to its user, and takes into account his or her weight, height, and preferred sleeping position in order to design a mattress and frame that encourages proper spinal alignment, says Rawls-Meehan. Reverie's mattresses are made from interlocking "DreamCells," which come in extra soft, soft, medium and firm; each side of the bed can be individually customized (so if your spouse likes to sleep on a board and you want to sleep on a pillow, you're in luck). Because the mattress unzips, the cells can be reconfigured after purchase to accommodate lifestyle changes (pregnancy, injury etc.) 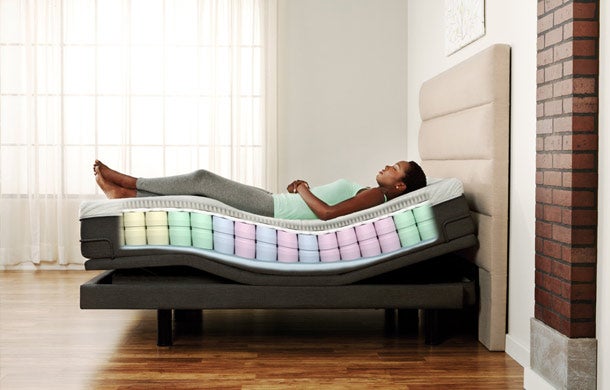 The sleep system can also adjust from a seated to flat to "anti-snore" (which raises the head of the bed by 7 degrees) to "zero gravity" position (which slightly elevates the head and foot of the bed, "eliminating strain and enhancing relaxation," Rawls-Meehan says).

These "levels' expand the sleep system's function beyond sleep. "It's a lifestyle product," says Rawls-Meehan; the adjustable frame encourages an easy transition between activities such as reading/watching TV/working and slumber. Each mattress comes with a "soothing massage feature," which Rawls-Meehan says can be programmed to replace a traditional alarm clock. ("Why not wake up to a massage instead?" he asks, which seems like a valid question).

"A big part of sleeping well is not just what happens during sleep, but what we do in the hours and minutes leading up to sleep," he says. "Being able to relax -- to receive a soothing message, or sit in the zero gravity position -- helps relieve stress and allows your brain to turn off so you can actually go to bed."

The idea is that a highly tailored sleep experience will not only result in more sleep more, but will also increase sleep quality. "It's not just about how much long you sleep but how well you sleep," Rawls-Meehan says.

Related: 5 Things To Do Before Bed That Will Jump Start Tomorrow

Tossing and turning disrupts both slow-wave sleep (known as deep sleep) – which helps the brain to recover from daily activities in preparation for new learning – and REM sleep. If you are learning a new skill, especially a physical one, "your ability to wake up the next day and have that information processed and readily available depends on how much REM sleep you got the night before," Rawls-Meehan says.

Numbers on a scale can feel so arbitrary. (Faithfully drag yourself to the gym for weeks, only to find you've gained a few pounds? You're not alone.)

So what if the mystery was taken out of the measurement? That's the premise of Aria, a connected scale from the makers of activity-tracker Fitbit that promises to provide a more complete picture of your overall health that's not tied directly to pounds gained or lost. 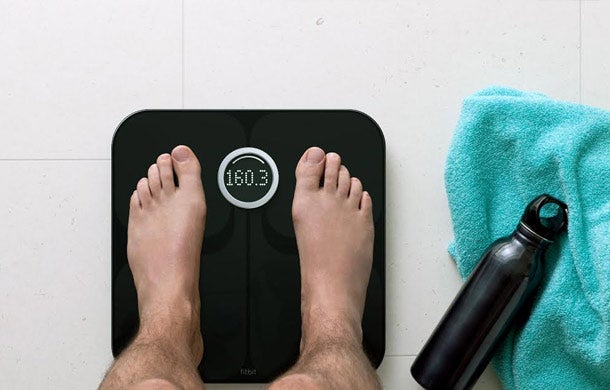 "It really enables you to focus on long-term trends versus short term blips," says Melanie Chase, Aria's product marketing manager. "There's a misconception that health is all about pounds, but when you really look at getting lasting results from a fitness plan you need to be thinking about things like, am I actually burning fat, or am I building muscle?"

Aria measures Body Mass Index (BMI) by taking into account your weight and height (You can get easily get an approximate reading of your BMI online). The scale gets more sophisticated, however, in its approach to measuring body mass, which it reads by sending imperceptible electrical signals up one leg and down the other. Because electricity travels through lean mass (muscle) and fat tissue at different rates, Aria is able to break down fat percentage versus lean mass composition.

A Fitbit product, Aria can be bought separately, but it's really designed to be used in tandem with the Fitbit's activity tracker. Together, the two devices provide an exhaustive account of your fluctuating fitness level on a day-to-day, even hour-to-hour, basis. By mapping calorie intake against calories burned (Fitbit), and providing a nuanced reading of body fat percentage (Aria), the two devices make it impossible to maintain rose-tinted recollections of how much we eat or exercise.

"All the benefits that you are getting from the tracker are amplified by being able to track your results on the scale," Chase says. "It helps you take control. A lot of times people are afraid of scales, but we like to think about scales our friends."