By Neil Parmar August 7, 2014
Opinions expressed by Entrepreneur contributors are their own.

The founders behind two school and office supplies startups – Chalkfly and Yoobi – think so. They're betting that their community-aimed efforts might one day help them grow into major competitors within this $20.5 billion sector.

For its part, Chalkfly converts 5 percent of someone's school or office supply purchase into store credit and awards it to a teacher of the customer's choice. (More than 1,000 teachers earned store credit to purchase supplies last year.) Yoobi, meanwhile, only launched in June and donates an item to a school in need each time a customer buys one. The impetus for creating their respective programs is the same: Both startups cite figures about how much educators spend out-of-pocket on materials each year – $485, on average, or more than $1 billion across the country. “Many of our team members are former teachers,” says Andrew Landau, Chalkfly’s co-founder and whose mother was a teacher. “For us, [giving is] not an afterthought.”

Related: How to Ace Back-to-School Season

At their core, these programs rely on sales to pay forward any social good. But competition has been growing increasingly fierce in this sector -- revenues have shrunk nearly 2 percent, on average, each of the past five years, according to market research from IBISWorld. And garnering market share isn’t easy considering the top two players - Staples and Office Depot, which merged with OfficeMax last year – control more than 76 percent of the sector. Still, these leaders have actually been shrinking the size of their stores in recent years to reduce underutilized space and lower their operating costs, leaving room for smaller players to make inroads. 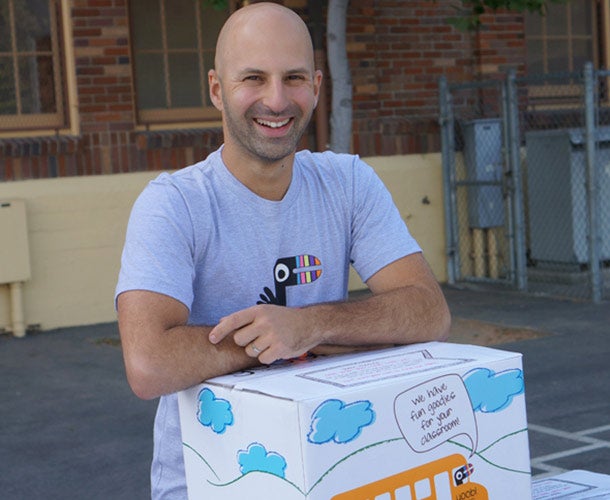 Offering lower prices has helped some upstarts gain traction, IBISWorld says, as has providing better customer service than the big box behemoths. But launching a giveback program on its own likely won’t be enough to successfully differentiate from competitors in this field, experts say. After all, Office Depot has previously given schools store credit of 5 percent after select customer purchases, while OfficeMax has held an annual event where around 1,000 educators have been awarded more than $1,000 worth of school supplies. “My formula is: commodity + charity = novelty, not sustainability,” says Steve Faktor, author of the book Econovation and chief executive of IdeaFaktory, an accelerated growth and innovation consultancy based in New York City.

"You can and should strive to be an ethical business, but these bolted-on hybrids are rarely good businesses or effective charities," he adds. "They may be able to carve out a small niche, but ultimately, purchasing departments are not the best channel for charitable giving."

Related: Where Back to School Shopping is Going

The founders of both Chalkfly and Yoobi acknowledge that their businesses must compete on other fronts, too, and not just with their social programs. Since debuting in 2012, Chalkfly has rolled out a 24/7 customer service hotline and started offering free shipping on all orders as well as a one-year return policy on most products. “The way we approach it is, ‘okay, if we were a customer, what would be the best experience possible?’” says Landau.

After launching nationwide exclusively through Target stores this spring, Yoobi started working to sell its wares directly to consumers online – an added convenience that IBISWorld says has been an important growth factor for smaller entrants in this sector.

Throughout the 2014/2015 school year, Yoobi aims to sell enough supplies to donate more than 30,000 gift boxes full of markers, scissors and hundreds of other items for classrooms. This back-to-school season, of course, will be a crucial time to test whether Yoobi catches on with consumers.

Part of Yoobi’s strategy is to stand out from competitors with hot pink pretzel erasers, fuzzy purple pencil cases and other colorful products. Its CEO and co-founder, Ido Leffler, successfully used similarly eye-grabbing packaging for his YES TO–branded beauty products, and the tactic might boost school supply sales in an industry known for what IBISWorld says has little product differentiation because most players tend to stock similar products. “While both [Chalkfly and Yoobi] are selling pure commodities, at least Yoobi is trying to create its own brand,” says Faktor.

Leffler, whose mom also happened to be a teacher, won’t share his precise sales goal for Yoobi this year. But he says his sales are on track based on the company’s internal forecasting. “For a declining market, we’re extremely bullish.”