Ever feel like you're all thumbs when typing on a smartphone? Jon Reynolds can lend a hand. The 28-year-old's London-based startup, SwiftKey, eliminates the clumsiness and frustration of inputting text into smart devices by replacing the stock on-screen keyboard with an artificial-intelligence-driven alternative that analyzes typing and language patterns to accurately forecast which words users will enter next.

Introduced for Google's Android mobile operating system in 2010, SwiftKey Keyboard leverages a proprietary prediction engine that probes the relationships between more than a trillion words, concurrently examining and recording user behaviors across platforms like SMS, e-mail, Facebook and Twitter. Once SwiftKey understands your writing style, the engine accurately anticipates what you're going to type faster than your fingers can follow. One-third of the app's suggestio­ns are correct on the first attempt; more than 80 percent of the time, users don't need to press more than two letters before SwiftKey fills in the rest. The software also helps clean up grammar and spelling errors.

"Smartphones are very limited devices in terms of size of space," says Reynolds, SwiftKey's CEO. "We took a dictionary approach, using multiple words and contexts to predict your next word and guess what you're about to write."

Reynolds conceived SwiftKey in 2008 while toiling as a civil servant. After witnessing a colleague struggling to enter text using a BlackBerry keypad, Reynolds started exploring solutions in collaboration with Ben Medlock, a fellow University of Cambridge graduate whose Ph.D. studies included natural language and information processing. 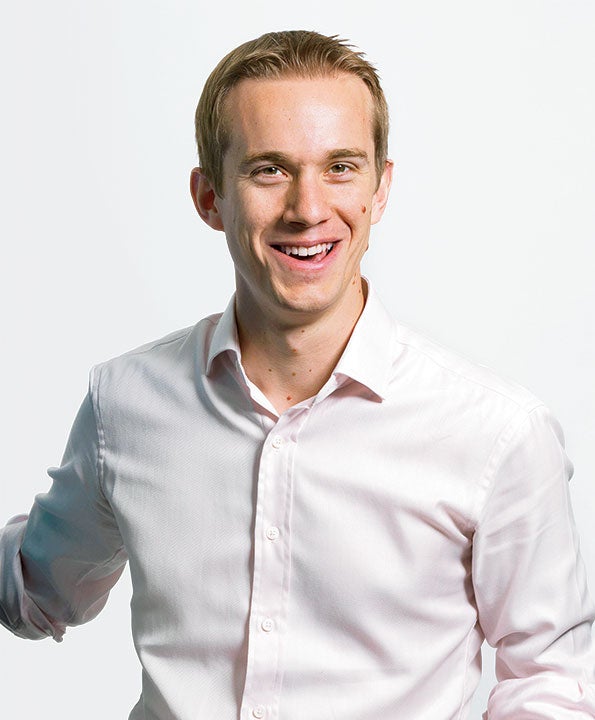 "It was clear things were beginning to change, and that mobile phones were the future," Reynolds recalls. "Improving the typing experience presented a massive opportunity."

"Mobile phones were the future. Improving the typing experience presented a massive opportunity."

SwiftKey Keyboard now boasts contextual support for more than 70 languages, from Afrikaans to Vietnamese. Subsequent updates and enhancements include SwiftKey Flow (an input method that enables consumers to slide between letters and the space bar for uninterrupted typing), hundreds of emoji characters and emoji predictions, and cloud backup features. Additionally, the firm has rolled out SwiftKey Healthcare, which tailors its predictive features to the medical professional lexicon.

Reportedly, more than 30 million Android device users have downloaded SwiftKey Keyboard. It reigned as Google Play's bestselling paid productivity app for two years and topped download charts in close to 60 countries. Add in software licensing partnerships with manufacturers like Samsung, and SwiftKey is now installed on more than 200 million devices worldwide. The company has raised more than $20 million in funding from investors like Accel Partners and Index Ventures.

SwiftKey's latest evolution is anything but predictable: This summer, it scrapped the $3.99 price tag for SwiftKey Keyboard, making the app free to all users. The move is designed to foster adoption in emerging markets, where Android sales dominate.

(In China, Android controls 82.7 percent of the smartphone market, while in Brazil the number reaches 87.3 percent.) SwiftKey will drive revenue via sales of premium themes and other customizable tools and content, as well as proceeds from handset licensing deals.

SwiftKey has also set its sights on Apple's iOS operating system. Historically, Apple has blocked third-party keyboard options, but in early June the company's executives pledged to reverse that stance.

SwiftKey Keyboard for iPhone is slated to hit the App Store this year, promising all the innovations Android users know and love.

"Our culture is very focused on delivering the best experience, best accuracy and best features we think will benefit users," Reynolds says. "Rather than a kind of abstract keyboard built by the manufacturer, we want to give [consumers] something they're more passionate about."