This Guy Just Made Opening Coconuts a Whole Lot Easier

Entrepreneur: Dave Goodman, 38, inventor of the Coco Jack, a cutting device that rips through the fibrous shell of the young Thai coconut for access to the water and meat.

"Aha" moment: A music prodigy who attended the Juilliard School's pre-college division, Austin-based Goodman was only 19 when he formed Wild Ginger Philharmonic, a nonprofit orchestra. But five years later, when Wild Ginger's reputation began to peak, Goodman was on the verge of a burnout. His cure included working on a biodynamic farm and adopting a raw-foods regimen heavy on Thai coconuts.

"I quickly realized that one bad stroke with a cleaver while opening these coconuts could end my career as a musician," Goodman says. He envisioned a sharp opening device with a long handle to keep hands out of harm's way. 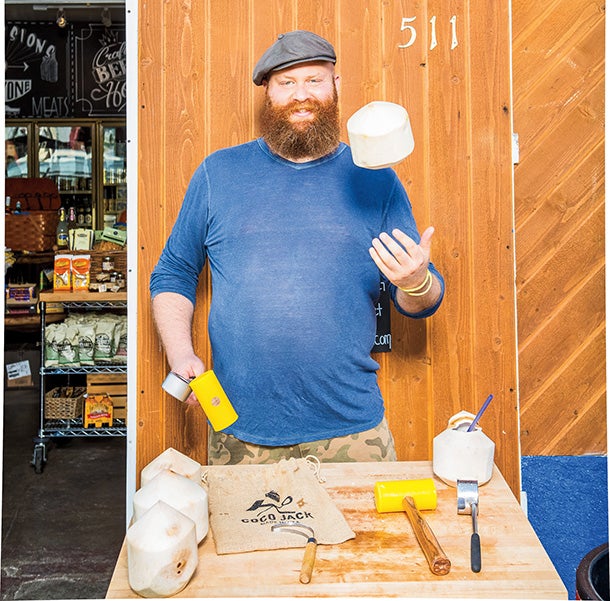 If I had a mallet: It took almost a decade for Goodman's idea to come to fruition. He experimented with more than 100 iterations of his invention, working with a Texas blacksmith on prototyping. In early 2013, he chose several versions of his working model--a mallet and stainless-steel jack, all with slightly different handles and teeth of various shapes and sizes--and traveled to California to get feedback from his target market of health-conscious consumers.

"I quickly realized that one bad stroke with a cleaver while opening these coconuts could end my career as a musician." -Dave Goodman

Armed with his test subjects' assessments, Goodman sought out manufacturers. In the end, one factory would turn out the mallets, and two others were designated to execute the jack. His first order was for 2,000 jack-and-mallet sets. Goodman's development costs--paid for with profits from the sale of his apartment--totaled about $30,000; around one-third went toward prototypes that also included a scoop, made of flexible stainless steel, that scrapes out the coconut meat.

Milk it for all it's worth: The jack-and-mallet kit and a pack containing the kit plus the scoop hit the market via Coco-Jack.com in December 2013. Fueled by a musician's awareness of the power of performance, Goodman exhibited his invention at trade shows, allowing attendees to bash Thai coconuts and walk away sipping through a straw.

By the first half of 2014, the Coco Jack was getting visibility at yoga, sustainability and raw-living events nationwide. Tapping into the cocktail craze, Goodman set up booths at the Nightclub & Bar Show, as well as the annual Manhattan Cocktail Classic, where he wielded his mallet in a tuxedo.

Healthy sales: The Coco Jack set costs about $32; the kit is priced at around $40. (The tools, including the scoop, can also be purchased separately.) Goodman is in talks with Whole Foods Market about carrying the products--now manufactured at a combination of domestic and Asian facilities. He's already sold them online to some 20 countries.

Up next: Goodman says he plans to create an industrial version of the Coco Jack for heavier use in restaurants and juice bars. But closer to his heart is a more humanitarian application. In countries where green coconuts are staples, children and women have lost fingers using machetes to hack through the fruit's hard exterior. So Goodman is in the process of adapting his invention in the hope that his company can partner with an NGO or charity to distribute it in developing nations.

"The small difference I had hoped to make in consumers' lives has suddenly become an opportunity to help solve a global problem."