How to Sound Human: Data-Backed Keys to Making Your Voice Stand Out Online

By Josh Haynam October 14, 2014
This story originally appeared on Buffer

For us marketers, it’s our job to stand out in that absurdly large crowd of content. One way to do this is to have a distinctly human voice.

To try and discover the magic formula for conveying that you are in fact a human on the internet, I’ve analyzed and tested over 1,500 quizzes that have been created through interact. My general hypothesis is that human sounding quizzes will get shared more, viewed more, and commented on more because people like them better. Based on that hypothesis I ran various tests and regressions to find out the best ways to sound like a person. Here are the top eight ways to sound like a real human on the Internet. 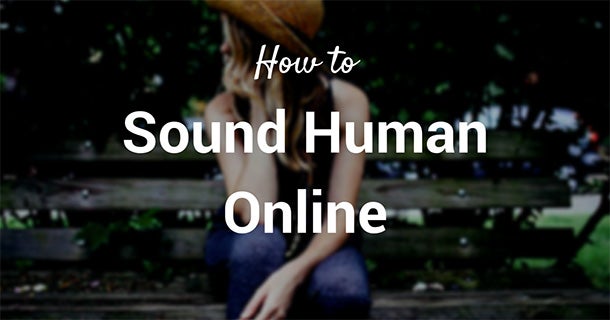 Did you know that you can get high by talking to a friend? When two humans are chatting (and it’s not a fight) our bodies release Oxytocin. The reason is a natural defense so that we’ll stick together and not be eaten by lions - if we like hanging out with each other we’ll have the safety of our “pack” to protect us.

Related: How I Increased My Conversion Rate 135 Percent -- and You Can, Too

To find out if talking like we do in real life can have an impact on how many views a quiz gets, I ran a regression of quiz views vs. personal pronouns used in the quiz content. I wanted to see if using personal language was correlated to how many people ended up taking quizzes. 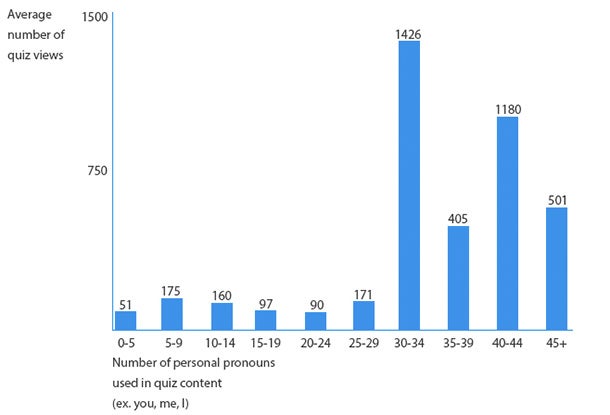 More personal pronouns do correlate with more quiz views. This is by no means causation - perhaps better quiz writers tend to speak more personally, or perhaps sites with higher traffic have more personal writing styles, but whatever the case, speaking like you are in a conversation surely does lead to more views.

Social posts that are written in the style we are comfortable with (meaning lots of personal words) can stick out from the noise because they appear more natural and interesting. Try writing your posts from the first person, addressing people like you would in conversation to take advantage of this finding.

We like things we can understand. It makes us feel smart and simple language creates strong communication because there is less risk of getting lost in interpretation. Speaking like your college professor might make you feel like a genius, but only at the expense of potentially alienating your audience.

Putting things in plain language will subtly cause readers to believe what you’re saying. When an idea is conveyed in simple terms you don’t have to process the information or think twice about it before gaining understanding.

To test the effect of simplicity on quiz views, I used a tool called Hemingway that analyzes five factors of writing style, one of those styles being simplicity. The app will tell you how many of the phrases in your content can be simpler.

I took all the text from 1500 quizzes and dropped each one into Hemingway, then sorted the list by number of non-simple sentences. 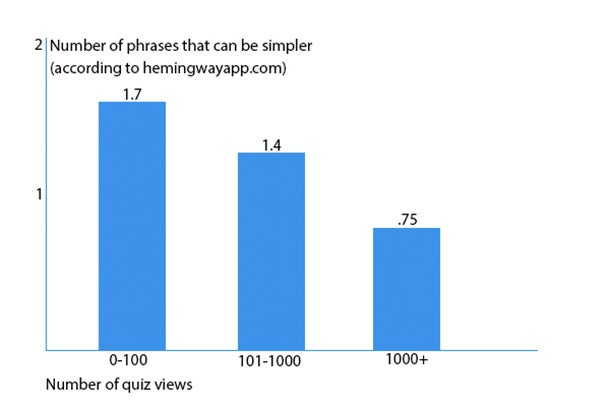 There is a definite correlation between simplicity and getting more quiz views. You don’t need to sound like an expert all the time. People appreciate some simple talk.

This is especially important on social networks where we are very limited in the snippets that get shared. For quizzes, all publishers are able to share is the name of the quiz and maybe a quick description. That’s probably why the quizzes with the simplest language ended up getting the most views. People can tell exactly what they are getting into without deciphering high-level language.

“Write drunk, edit sober” was Ernest Hemingway’s mantra. Hemingway didn’t know it but he invented the tipsy college student rule. This “rule” basically states that you should take the edge off of your writing. Speak candidly, qualm your fears about being controversial, say what you want to say.

Viral content site Buzzfeed led the way with creating tipsy college student content (and recently was valued at $850m in part because of it). Their posts and quizzes are about as irreverent as most people can stomach - from “The 19 worst places to fart” to “How many of these butts would you touch.” The result is 160 million visits each month with the most popular pieces on their site often being the most controversial ones.

However, since people have already analyzed the living daylights out of Buzzfeed, I thought I’d do a case study of my own to discover if their method is replicable. I pulled out Food52, a blog that writes about you guessed it - food. They have created six quizzes, averaging 25,000 views per quiz. In contrast, the overall average quiz built using Interact gets 544 views. So why does Food52 consistently outperform everyone else? There are a variety of reasons I’m sure, but one of those reasons is the way they go about writing their quizzes.

Food52 understands that entertainment should involve a little humor, and the most entertaining pieces are likely to stand out in the sea of social media posts. Let your guard down if you want potential customers to do the same. Our natural tendency is to get overly formal because of how many people could potentially read what we write, but formality sounds scripted. Don’t be afraid to speak candidly, it will help people connect with you.

The Irish post created a quiz that reached a full 20% of the Irish people living in London, almost entirely through Facebook. In comparison, only 57% of all Irish people in London voted in 2010! How did they manage to pull that off?

In talking with the editor of the post, he told me about his rule for writing, which he calls the pub rule (if you didn’t know, Ireland really like their pubs). He told me that he won’t publish any piece that wouldn’t be appropriate for a conversation in a pub. That means both the topic of the piece and the way it’s written. 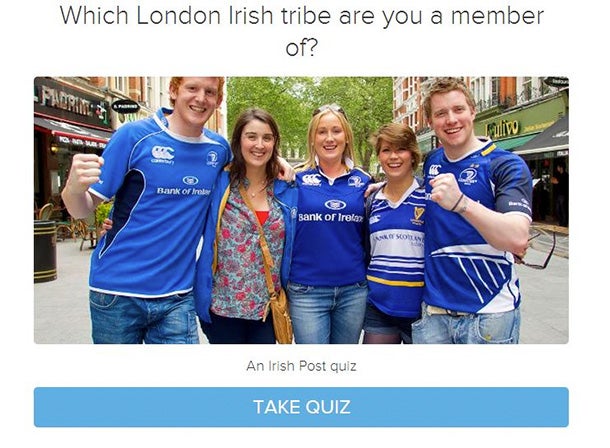 His reasoning is that when people read his content they’re easily distracted by a million other things like what the princess is wearing today and how many puppies can fit in a box. He doesn’t ever want readers to feel like they’re being lectured at or having facts recited in their faces.

Whenever he’s done writing a post he’ll read it out loud and decide whether or not it sounds like a pub conversation. For best results he does it at an actual pub.

5. Use your own vernacular.

I like to use the word “howdy” when greeting people. I’m not from the south, but it just seems so much friendlier than “hi.”

One time when I was hiking in Mammoth California on a busy trail I tested the two words against each other to see which got better responses from passers-by. To some people I would say “howdy” and to others I would say “hi.” In this very unscientific test I found that folks I said “howdy” to were much more responsive and friendly. 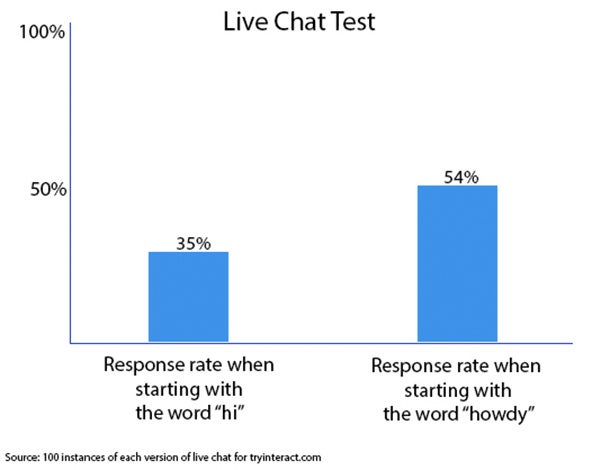 We all have little “ticks” that make us unique -whether it’s starting conversations by saying “howdy” or using the same dumb icebreaker your best friend always uses. These little things make us unique and identify us as human, so don’t be afraid to use them.

Stories are a natural way to communicate. Since the beginning of time they have been a method of communication. Each person has their own style of storytelling which will reveal subtleties of your humanness.

Adding a story to your blog post can increase readership by 300% on average and boost on-page time by 5x. Because we are so used to stories being a part of our lives, they feel natural and comfortable.

Also, one of the main reasons robots haven’t been able to pass the Turing test(which decides of you are human or not), is that they are unable to tell stories because they have no memory of the world as it stands. You and I could pass the Turing test because we are able to convey information in story format (and we’re also human). 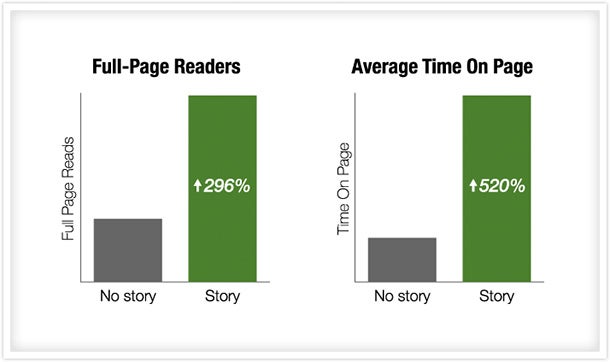 Situational references are a sure-fire way to differentiate yourself from a machine and take on distinct human traits. If you’ve seen Terminator you know that robots just don’t get pop culture references.

To test what kind of effect pop culture could have on quiz views, I sorted 1505 quizzes into two categories - those whose titles contain the word “celebrity” and those that don’t. The average quiz views were significantly higher when the word celebrity was used in the title of the quiz. 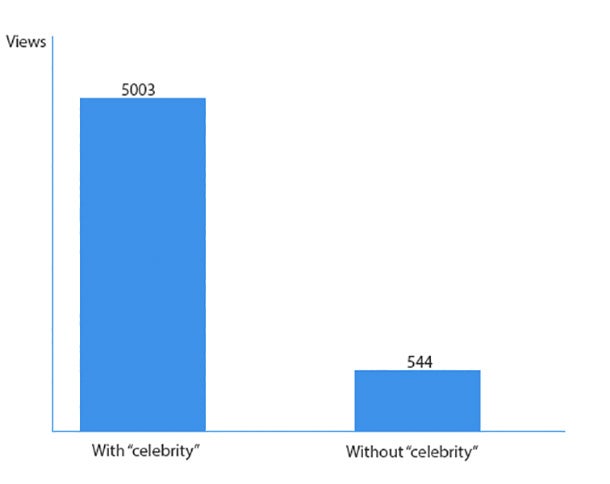 Again, we are dealing with correlations here. Maybe quizzes with celebrities are much more fun than those without and therefore get shared more. I’m not saying that adding the word “celebrity” will get you 5000 views to whatever piece of content you are sharing.

What the data does show, however, is that tying content into the lives that you and I lead on a day to day basis does correlate to more views.

Shaquille O’neal turned himself from a basketball star into a global brand. He’s got his own line of soda, his own TV show, and numerous endorsements, oh and he’s worth $350 million dollars - all while being retired for three years.

A big part of Shaq’s overall brand comes from the power of his social media presence. He’s got 8.55 million twitter followers and 4.7 million Facebook likes.

When it comes to all things social media, Shaq has a rule. His rule is that 80% of his posts are meant to entertain his audience, 15% are meant to be informative and interesting, and 5% are meant to sell products.

Despite numerous endorsers, a TV network to promote, and even a few tech investments, Shaq realizes that it’s not natural to be selling all the time, and no one likes it. Most of his efforts are spent building his audience by sharing fun and interesting content. That way, when it does come time to promote a product he’s got a loyal and engaged audience to sell to instead of a bunch of followers tired of hearing about whatever product he’s hawking today.

There’s a massive amount of content being posted on social sites every day. As marketers it’s our job to stand out from the noise and make an impact. To do this, we’ve got to have a distinctly human voice that draws in readers. I’ve covered a few ways that have worked really well for interact, and I hope they are just the boost your social efforts need to rise above the sea of content being produced every day.

Related: 6 Powerful Psychological Effects That Explain How Our Brains Tick