Soleil Moon Frye: 'There's Never Been a Better Time to Be a Mompreneur'

By Laura Entis November 12, 2014
Opinions expressed by Entrepreneur contributors are their own.

Halloween was a busy time for Soleil Moon Frye. The former Punky Brewster actress and mother of three had just returned to Los Angeles after spending less than a day in New York City for a stint on The Today Show, and was back in full-blown mom mode: Halloween morning was spent volunteering at her kids' school, the afternoon was dedicated to watching her children march in the parade (in costumes she'd made herself) and the early evening was reserved for trick-or-treating.

These days, hectic is normal for the former child actress; on top of Moon Frye's considerable mom duties (her kids are 9, 6 and 8-1/2 months), she's also the co-founder of P.S. XO, an ecommerce party supply company for kids that just announced its merger with Seedling, a line of children's products sold at major retailers such as Nordstrom, Neiman Marcus, Macy's and Barneys. Together the newly minted company, which will go under the Seedling name, raised $7 million in funding from Upfront and Greycroft Ventures.

While the dual demands of keeping up with three kids and growing a business can be a handful -- "my minivan has become my mobile office," she says – Moon Frye wouldn't have it any other way. In fact, it was newfound motherhood that initially spurred her towards entrepreneurship.

Related: Pinterest Marketing Tips: What You Can Learn From 20 Big Brands

"When I was a new mom, I had so many questions about being a parent," she says, noting that for a long time she felt like an imposter, the one mother who had somehow failed to get the "secret handbook" that rendered parenthood simple. She vividly remembers the day a friend came over and asked if she'd heard about "this thing called Twitter." Upon introduction, Moon Frye was instantly hooked; on the social network, and later on Facebook, Instagram and Pinterest, she found her community. "I started sharing my Mommy moments -- I would take a picture of Sharpie marks on the wall, and spit-up in my hair, and say 'Ahhh! Am I the only one who is having a hard time?'"

Judging from the outpouring of responses she received, it quickly became evident that a lot of mothers hadn't received a secret handbook, either: "It was incredible to see that there were so many parents out there like me."

P.S. XO grew organically from these interactions. A "constant crafter" who "loves parties," Moon Frye started sharing pictures over social media of party decorations she'd made herself, to which she received a flood of questions, primarily: 'How can I recreate that?' Moon Frye would respond with little tricks and tips, but the real answer was that it took a lot of time: Decorating for parties typically meant hours spent poring over Etsy and Pinterest, "surfing and curating." Why, she often wondered, wasn't there a site where she could find all the party items she needed in one place?

Enter P.S. XO. Started as a party-planning app by Moon Frye and her friend Kara Nortman in spring of last year, the concept expanded this May to include an ecommerce site that sells party boxes, which range in price from $39.99 to $99.99 and contain all the ingredients -- from invitations to decorations to supplies -- necessary to create a stylish bash (popular themes include fairy, pirate and princess) 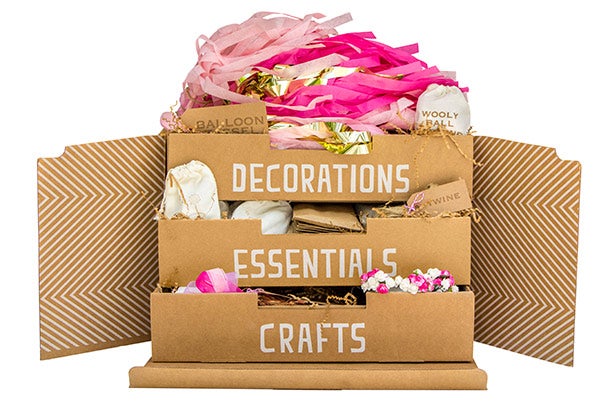 Throughout the process, Moon Frye continued to ask her social media following for feedback. "If I'm making a beautiful party box, I want to ask them, do they like it? Do they love it? What are their thoughts?" she says. "I want their input, in the same way that if I need advice about how to get my kids to get along, I can ask: 'Hey! How do you get your kids to communicate with each other?'

She considers her customers her peers: "I turn to them as if they are part of my extended friend group."

Now, fresh of P.S. XO's merger with Seedling and the joint-company's successful $7 million funding round, Moon Frye says she is so grateful for the community she's built online, especially when she considers a recent phone call she had with her mother, who gave up working to take care of her and her brother. "I don't think she realized you could balance both," she says.

Today, things are different; in fact, Moon Frye says there has never been a better time to be a mompreneur. The rise of social media hasn't just made it easier for mothers and fathers alike to pursue their entrepreneurial dreams while raising a family, it's inspired them to create new products and services for parents who are facing similar experiences and milestones with their own children. "You realize there are probably lots of other people whose kids are going through this," she says. At the same time, "it's now possible to create a brand and share it in a way that didn't exist 10, 15 years ago."

Related: 5 Essential Steps to Achieving Balance as a Mom Running a Business

5 Ways to Start a Lucrative Real Estate Side Hustle