This story appears in the December 2014 issue of Entrepreneur. Subscribe »

Green is gold in today’s environmentally conscious market, and studies have shown that demonstrable environmental consciousness can tip the balance for consumers when making purchasing decisions. Retailers have been quick to take notice—not just by using sustainable processes and packaging in their ventures, but by changing the way consumers experience their brands. One high-impact way to do so is by incorporating what’s known as living walls—vertical planting systems—into retail spaces.

Environmentally conscious jeweler Todd Reed built a two-level living wall into his recently opened store in Venice, Calif. The installation begins on the building’s facade and continues to the interior, cut by a wall of glass. Mike M. Moore, founder of architecture firm Tres Birds Workshop, is helping the Boulder, Colo.-based jeweler stake his claim in California.

“We felt a need to soften the building and connect outside to inside,” Moore says. The exterior portion of the wall helps absorb auto noise from the busy street, acts as signage and lures passersby with its beauty and jasmine scent. Inside the store, the wall also works
as a sound dampener, while reducing heat and adding color and life to the space. Reed, whose designs often incorporate raw natural elements such as rough diamonds, says the living wall reflects his aesthetic and keeps him “personally inspired.” 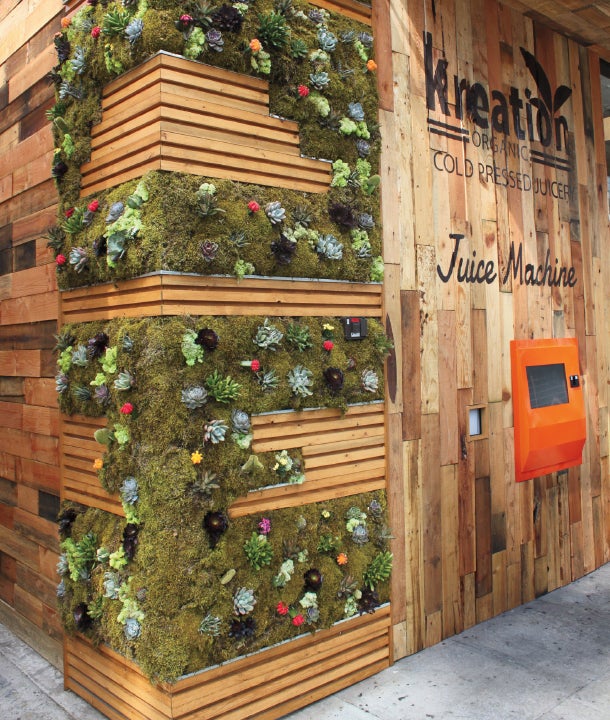 Adding organic elements to the retail design equation can also add appeal for consumers. “We wanted an atmosphere that people love to be around,” says Marjan Sarshar, majority owner of the quickly growing Kreation Organic chain of restaurants and juice bars in the Los Angeles area. “Greens will definitely do that.” Kreation’s signature look—seen at its 10 and counting locations—involves reclaimed wood walls covered with succulents.

The initial inspiration came from a lack of space; some of Kreation’s locations are as small as 220 square feet. “If we added landscaping, we wouldn’t have any space for seating, so we looked to the walls instead,” Sarshar says. Though not a designer, she conceived the first Kreation living wall herself, choosing succulents for their low maintenance requirements. Since then, all other Kreation locations have featured that signature living wall.

According to Hootan Hamedani of Hootan & Associates, which assists Kreation in implementing its look, the walls have helped successfully build the brand. “Everybody knows Kreation with that type of living-wall design,” he says.

The installations help with cooling and “make the restaurants more striking and highlight our green initiatives,” says Elizabeth Meltz, director of environmental health for B&BHG. But they sometimes serve an additional purpose as well.

“The wall was never intended to supply the restaurant with all of its herbs,” Meltz points out. “It’s like any other herb garden; if something is especially lush or something inspires the chef, it might get used.”

Pizzeria Mozza’s walls were created by Jim Mumford of Good Earth Plant Company, San Diego’s largest locally owned provider of interior and exterior landscaping. Mumford says living walls, a nonexistent portion of his business a few years ago, now represent 30 percent of it. Next up, Good Earth is installing the walls at branches of the home store Pirch in Dallas and Atlanta.

A report released a year ago by the Natural Resources Defense Council noted that consumers are willing to spend up to 12 percent more at commercial centers with certain types of quality landscaping. So organic design elements like living walls don’t just make good green sense—they’re good business sense, too.

How a Green Thumb Is Helping This Entrepreneur Earn Greenbacks

Sowing the Seeds: What Gardening Teaches About Leadership

What Tending a Vegetable Garden Can Teach You About Business