By Pamella de Leon November 24, 2014
Opinions expressed by Entrepreneur contributors are their own.
You're reading Entrepreneur Middle East, an international franchise of Entrepreneur Media.

Sami Khoreibi, CEO and founder of Environmena is accustomed to the stigma of failure in the region, and the challenges in starting a venture in the solar industry. Khoreibi credits seeing his ideas "turn into reality and watching that reality grow" as his source of personal motivation, describing entrepreneurs as "fluid, patient and bold", and asserts that 'treps are "calculated risk takers [who] figure out a way to reduce risk with every step they take." As an entrepreneur with three co-founders, his tips for healthy co-founder relationships include communication, asking for help, and delegating when the work becomes overwhelming. "I have to give the title of great Middle Eastern entrepreneurs to both my parents. My mother and late father raised four entrepreneurs themselves, each focused on very different fields. Their genuine support and excitement for any idea we had or continue to have is highly motivating and has always been a large part of the initial courage required to start a new venture."

What inspired you to start Environmena?
During a business trip to Abu Dhabi in 2006, I learned about the up-and-coming Masdar Initiative. As the first program focused on renewables in the region I thought there was a tremendous opportunity to build the regions first pure play solar company from the ground up. Having already successfully founded and publicly listed a conventional energy company in Toronto, I was able to transfer a lot of my knowledge to this exciting new venture along with my co-founders.

Environmena has three co-founders. How is division of labour decided?
I am fortunate that my cofounders are old friends of mine. Erik [Voldner] is the Executive Director for Operations, and responsible for overseeing the company's operations and business development activities. And Sander [Trestain] is the Executive Director for Projects and oversees the construction, commercial contract negotiation, project management and contract tendering. We all have a passion to succeed; we work hard and have a high tolerance threshol - a must when starting a business! Also, we have a compelling mix of engineering and old energy skills, perfect for pioneering change in the energy sector. It's critical when starting a business that you get the right people around you to help make the company a success. It's been great to share Enviromena's journey with people with the same background as me who I have known for a long time. 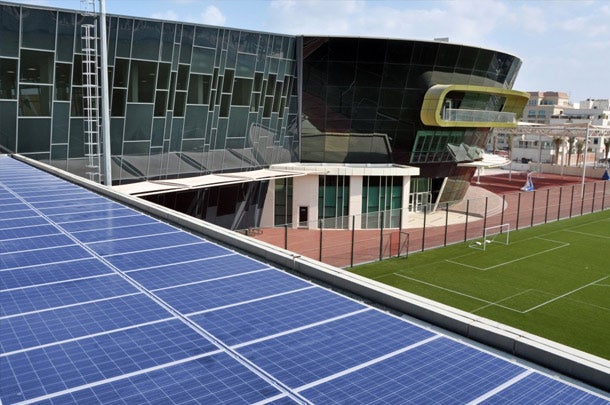 What are the difficulties in your partnership?
One difficulty in our partnership is that we have quite different risk tolerances. My approach to winning new business and growing the firm is quite aggressive, whilst their approaches are more studied. This works well for the business because we balance each other out and take a more measured approach!

What is your role at Environmena?
As CEO of Enviromena, I am a voice for the company and responsible for driving its growth strategy forward. This means keeping up to date with the latest industry news and technology, sourcing new business, and managing the company's internal structure and efficiency.

What's one thing you make sure you do for your company to run efficiently?
Ensure that we hire the right people and keep them satisfied. In Enviromena's early days, we recruited solar PV experts from the European and U.S. market to form the core of our engineering and project management team. We then trained bright, young, local talent with a keen interest in solar but little experience as part of our cascade training culture. We have now built up an amazing team of regional and international talent who have become the first home-grown team of solar experts.

Top three tips for an entrepreneur to start a business in the UAE?
Be patient, sometimes things will take longer than you expect. Share your ideas with those you trust- other people's input is hugely valuable when diving into a new field. And don't be afraid to take a calculated risk; if you don't take any risks, your company will likely never get off the ground.

What do you think is the region's biggest challenge for entrepreneurs?
The fact that there is no bankruptcy law in the UAE is a huge hindrance for budding entrepreneurs. Not only is it an insurmountable obstacle, but it creates a stigma about failure. Regulatory systems in MENA are still very far from business friendly, and this is another challenge. And despite a notable recent growth in investments, funds invested in startups are still small.

What were the difficulties in introducing solar energy, a concept that's not quite permeated the public consciousness in MENA? How is the MENA and GCC space welcoming the surge of solar industry?
The biggest misconception about solar energy has always been that it is far more expensive to produce than conventional energy. Due to falling generation costs and an increased demand for energy, solar PV is now cost competitive with other forms of power generation. It now makes sense from an economic standpoint as well as an environmental standpoint. The MENA solar industry is an extremely exciting place right now. An average solar panel here produces around twice as much energy as a solar panel in Germany, based on how much sun you get. And as energy consumptions rise, governments are realising how important it is to increase their solar capacity. There is a continuous flow of projects coming onto market.

What moment in your career did you feel that you finally "made it"?
In 2008 we were awarded our first project- which also happened to be the first grid-connected, utility-scale solar PV project in MENA, the Masdar 10 MW plant. Completing work on the project was a defining moment for Enviromena, but still a very early stage in the development of the company. We've experienced some great milestone moments over the years, but I think we will only feel like we've 'made it' once the region has deployed full-scale solar programs and Enviromena has maintained its position as a market leader.

Which MENA country do you think has the most supportive SME?
The UAE is not a very conducive environment for SMEs due to the high number of regulations in place. However, there are a number of programs and organizations that help, such as Masdar, who have been a huge support to Enviromena since it was founded, and Dubai SME, which provides startups with support systems and advice from experienced industry professionals. The large numbers of free zones in the UAE are also a huge catalyst for new businesses.

What are some setbacks you've experienced? Discuss an error in judgment that you made earlier on that could have been prevented had you done more due diligence?
In 2008, just a year after Enviromena was founded, the global recession hit the UAE, significantly reducing the amount of business in the industry. This was a major setback to our growth as a company. And in 2010, the Arab Spring drastically limited the number of markets that we were able to operate in. But because we were able to weather both storms, we became virtually the only company in the region to offer solar EPC and O&M services, and this helped us to gain a substantial market share. An error in judgement that we have made was to deploy limited company resources into a market that wasn't ready for Enviromena to enter, because we believed that the market would develop sooner than it did. This forward-looking approach has at times created a bit of a 'first mover disadvantage' for Enviromena, but for the most part has also given us a 'first mover advantage'. This has been an integral part of our success as a company.

What is your daily routine like? What are your work habits like?
Every morning starts with good music and espresso. I try to be at my desk as much as possible for the first couple of hours of the day to clear my inbox and deal with internal company matters. After that, no two days are fully alike as we are always dealing with different projects, partners, investors, governments and many other interesting people and companies. I try to get at least an hour's exercise in after work every day and, last but not least, a nice dinner with friends and family.

What are your favourite apps?
I am a huge fan of the Uber app and use it whenever I travel to a new city. It's a great, sustainable initiative and the cars and drivers are great quality. I also love to listen to podcasts when I'm travelling. My favourite one at the moment is This Week in Startups which profiles startup companies.