Need to Hire a Web Developer? A Marketing Manager? Get in Line.

One thing is certain about the new year: It will be a great time to look for a new job.

With about 3 million vacant positions in the U.S., and hiring on the rise, CareerBuilder and its job-market research arm Economic Modeling Specialists International (EMSI) set out to find exactly where the most jobs are. The researchers pulled data from about 90 sources, including job boards, and compared the average number of new hires per month with the number of advertised openings in about 700 occupations.

"Job seekers are gaining leverage, since the rate of workers being hired isn't keeping up with the frequency and volume of job ads," says Matt Ferguson, CareerBuilder's CEO.

The study also looked at advertised pay, breaking annual salaries down to their hourly rates to directly compare exempt and non-exempt jobs. (The calculation divides yearly salaries by 2,080, assuming 40 hours per week for 52 weeks.)

Here are the 10 fields with the most job openings now, and where CareerBuilder projects opportunities will keep growing well into 2015: 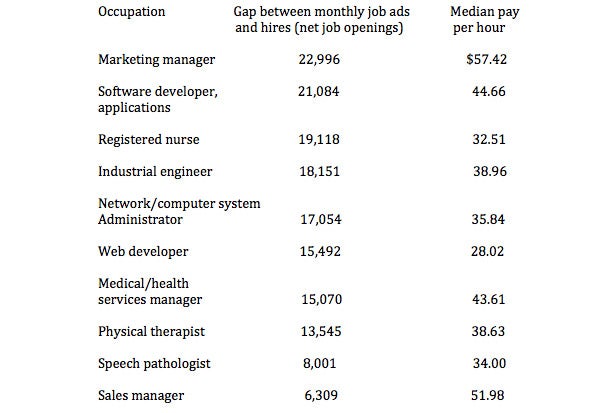 It's not news that tech expertise is in short supply, but why the surge in demand for marketing mavens? Chalk it up to the proliferation of social media, and the relative scarcity of people who can make a company's message stand out amid the ever-growing clutter. The onset of health care reform, meanwhile, had led to a call for more medical managers, and the aging of the U.S. population will lead to even more demand for all kinds of rehabilitative therapists in the years ahead.

If anything, CareerBuilder's figures understate employers' appetite for talent, since the data only reflects advertised job openings. Other studies have shown that as many as half of all management and professional jobs never appear on any job board but are instead filled through networking and word-of-mouth.