For Franchises, Small Changes Are a Big Deal

By Jason Daley December 22, 2014
This story appears in the January 2015 issue of Entrepreneur. Subscribe »

Dunkin’ Donuts began offering a new type of java in September. For most coffee shops, brewing up an extra batch is no big deal. But for a franchise that serves more than 5 million customers per day and deals in tons, not pots, the launch of Rainforest Alliance Certified Dark Roast was a huge undertaking.

It meant changing operations at nearly 8,000 U.S. restaurants and 3,100-plus international units. It meant calculating exactly how much coffee to brew and when to brew it so franchisees wouldn’t waste expensive beans and lose money. It meant reprogramming machines, retraining staff and finding ways to alter routines without slowing down service.

Dealing with changes in operations—getting the gears to turn and all the pieces to line up so a business can generate the most income—can be difficult for a widespread franchise system. So difficult that there is an entire industry built around it: consultants and experts who come in to fix faulty assembly lines, get training in order, figure out employee scheduling and tackle other issues.

Getting operations right, especially in businesses with thin margins, can mean the difference between success and failure. “It’s important how fast you get a franchisee to their first dollar, how fast you get them up and running,” says Evan Hackel, founder of Woburn, Mass.-based Ingage Consulting, which sponsors the Franchise Operations Performance Summit. “With good planning and excellent training, you can cut time [and] reduce the cost of opening and the amount of capital being spent. It’s also important to morale and how fast they can get to their profit. Training and operational excellence does those things.”

Surprisingly, operations are often viewed as an afterthought. “In the franchise industry, the sexy things are marketing and growth,” says Weldon Spangler, the Dunkin’ Donuts vice president of operations who spearheaded the rollout of Rainforest Dark Roast, as well as new sandwiches and special promotions. “Those things are critical, but that’s where most people who don’t really understand the franchise business focus their attention.”

The larger a system gets, the more the problem is compounded. “Generally speaking, when people come out with a concept, the founders are experts in running the operations themselves and haven’t taken the time to think about how to transfer that knowledge to others,” explains Hackel. “When a system is small, it has the personal touch. The founders can physically visit a location, and it’s easy for a franchisee to get help.”

As a franchise grows, however, a small corporate staff can’t handle as much personal guidance. “A system with one to five units is super hands-on,” Hackel says. “By the time they grow past that, a system should have clearly defined operational practices and set standards for consistency. In reality, though, a franchise of that size is all about building the brand, and they don’t think about things like that.”

What often happens, Hackel explains, is that a franchise system gets to 50 or 60 units, making expedient tweaks along the way, without deeply considering the effects of the expansion on operations. Eventually, the system starts to hit walls: The logistics of getting supplies to units gets bogged down; menus or services get overly complex or time-consuming; franchisees might start to have problems training employees correctly. “At some systems, they’ve gone way past the time they should have been thinking about these things, and it causes major problems,” he says.

In fact, franchises should think of operations as a constant, evolving process. “Change is inevitable and should be embraced,” Hackel says. “A system has big operational changes at 25 units, then [again] at 50, then 100, 250, 500 and 1,000. It’s hard to imagine that a franchise could anticipate all the operational problems it would face from day one. Anyone who started in the late ’90s couldn’t have foreseen the internet and all the changes it [would bring] to their business. The biggest problem in operations is the hubris of thinking a system will be perfect forever. But the competition evolves, the customer evolves, and the environment evolves, and these businesses have to keep up, too.”

Ignacio Goris, founder of Labor Guru, an industrial engineering and operations consulting firm in Miami that has worked with Checkers and Arby’s, says he sees this all the time. “It’s not that these companies didn’t think it through. And many times they think, ‘If our system works, why change it? It’s not broken,’” he says. “So they build store seven the same as store six. But when they get to 60 units, they find that none of them are as efficient as they could be.”

At that point, Goris adds, the company should have an outsider evaluate its operational strategies. “If you have 10 or 15 new units in the pipeline, and you are able to increase efficiencies and cut 200 square feet from the prototype, franchisees are going to see a quicker ROI,” he says. “But it’s hard to change people’s minds. We don’t tell people our gut feelings. Instead, we show them hard data and tell them, ‘This is what I think you should do,’ and have them make decisions based on that.” 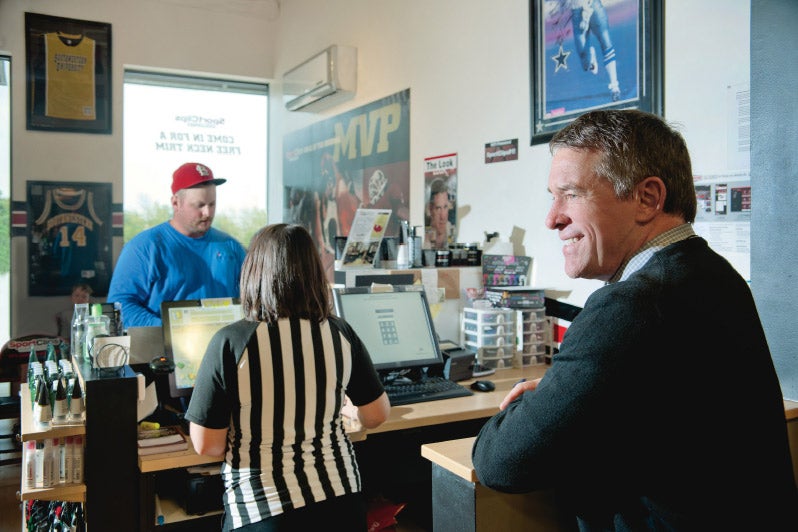 But the real sticking point in operations is employee training and management. One company that has been consistently excellent at maintaining brand standards while expanding rapidly is Sport Clips Haircuts, the male-focused haircut franchise.

“The interesting thing about the hair business—and I think people miss this—is the person providing the service,” says Sport Clips president Mark Kartarik. “It’s a much bigger component for us than [for] other franchises. Once Target gets a red sweater in stock, it’s the same all around the country. We promise the same consistency, but we rely on our people to provide that.”

To that end, regular training is at the core of Sport Clips’ operations. Unlike other franchises, which are increasingly heading to digital interfaces, Sport Clips maintains a practice of face-to-face training. “Distance learning is the rage right now,” says Kartarik. “But the fundamental face-to-face stuff is not going away. I read a study that showed if you work 6 feet from somebody, you’re four times more likely to interact with them online. If you’re in a different building or even a different floor, that reduces to almost zero.

“What we’ve done really, really well is give our employees and franchisees lots of face-to-face,” Kartarik continues. “We have quarterly leadership conferences in each region of the country, where franchisees and managers can keep abreast of new developments, and each franchisee goes through a team-leader training camp when they come into the system. Then they go through another training camp within five years. In a rapidly growing system, even if it doesn’t seem like things are changing fast, they are. We bring people through the camp again instead of letting them rely on old information. It’s how we reliably get information out there.”

Also keeping Sport Clips at the cutting edge of operations is responsiveness. The company’s leaders have embraced the idea that there is no operational standard of perfection. They realize—especially after adding an average of 126 stores per year for the past five years—that operations need to be constantly reevaluated.

“We have a monthly operational review process where we look at what’s working well from the franchising side to the end client and what we could do differently and better,” explains vice president of operations Connie Boltinghouse, who points out that any changes are tested in the system’s 30 Texas and Nevada company stores before full rollout. “I stand up at [Sport Clips’] Discovery Day and tell people this is the best system because we test all programs and new ideas.”

Goris at Labor Guru also focuses heavily on employees, but his main concern is scheduling. Some companies he works with have budgeted on labor percentage instead of hours; others have budgeted the proper number of hours, but not at the right times. “People know things like food costs really well,” he says. “They know their return on their food. But when I ask them about labor, I get a blank stare. They need to know how many crew members they require from half-hour to half-hour. If they have 10 extra hours in prep, but not at the drive-thru or the register, they’re going to fail because they don’t have the right labor.”

Many franchises have a fundamental mismatch between what they think they’re prepared for and what they really need. For instance, restaurants will scale their kitchen and facilities based on the number of seats at the front of the house; a location with 300 seats will have a kitchen that can handle 300 orders, as well as a parking lot that can handle all those cars.

The problem, Goris says, is that “seats don’t equate to parties or sales,” adding that many of his clients end up paying too much for real estate and buying too much equipment. “Based on their history of customer volume and how each resource is tapped, we can tell our clients what equipment package to shoot for. It’s about right-sizing each resource in each facility.”

At Dunkin’ Donuts, Spangler likes to simplify operations by making sure every piece of equipment does double duty. “A lot of things we roll out come through our existing equipment,” he says, pointing out that the dark roast, which is made in smaller quantities than the brand’s regular coffee, is brewed in the same reprogrammed machine.

“When we look at a new piece of equipment, we project our ideas out into the future. The technology we implement today will need to solve problems for us three years out.”