Miracle Grows: Fast-Growing Franchises to Keep On Your Radar

By Jason Daley February 22, 2015
This story appears in the February 2015 issue of Entrepreneur. Subscribe »

Chuck Bongiovanni was feeling mildly annoyed when his franchise, CarePatrol, sold only four units in one month last year. That’s when he realized things were actually going great. Really great. “Sometimes I have to slap myself,” he says. “I have to remember that in our second year we only sold four units total!”

Now in its fifth year of business, the Arizona-based franchise, which helps seniors find assisted-living facilities, has 125 units across the U.S. and added 60 units in 2014 alone. It’s a meteoric rise for a franchise system. But while growth is positive when it comes to the economy in general, in franchising it can come with extra baggage. A new brand that doesn’t grow quickly and doesn’t generate enough buzz can be seen as a bad bet. But one that grows too quickly, adding dozens or hundreds of units out of the gate, could be a red flag that the founders are more interested in pocketing franchise fees than in helping their franchisees get off the ground and maintain successful businesses. Then there are the systems like CarePatrol, which have found the sweet spot between rapid growth and smart growth.

For Bongiovanni, this wasn’t an accident. “We spent the first three years getting our system down, and planned for slower growth,” he explains. “Once we had our system and key employees in place, that’s when we decided to ramp things up and speed development.”

The key to making it happen, and to not being overwhelmed by so many new franchisees, is CarePatrol’s training program. Franchisees are trained at corporate headquarters for a week and in their home territory for at least a week before undergoing a 16-week intensive coaching program.

“Our franchisees joke and call it our ‘forced success program,’” says Bongiovanni. “We typically have six franchisees a month going through training. Providing all that front-end support is how we’ve been able to do so well.”

One franchise that has seen unexpected rapid expansion is Fredericksburg, Va.-based Engineering for Kids, which has added 117 units in 31 states since its January 2012 launch. “It’s been a really fast start, and that’s something we didn’t anticipate,” says vice president of marketing Mike Cavanaugh. “We never approached this by the numbers, setting quotas for how many units we wanted to do.”

Instead, he says, each time a new unit opened, the company would see a flood of franchise candidates. “As a matter of fact,” he adds, “100 percent of our domestic franchisees contacted us unsolicited, and 11 percent of our franchisees were referred to us by other franchisees. That’s something we’re very proud of.”

That strong, organic growth has meant that Engineering for Kids—which provides STEM (science, technology, engineering and mathematics) enrichment after school, at parties and during camps—has had to evolve its business more quickly than franchises that spend years perfecting their systems before expanding. This has meant broadening services based on customer demand.

The company’s support staff has grown rapidly, too. At launch, the franchise was managed by the founder, Dori Roberts, and two part-time franchisee support coaches. Since then, it has added three vice presidents and a manager of curriculum development, among other positions. It has also developed a huge library of training videos. “We’ll always be adapting,” Cavanaugh says.

Also seeing massive organic growth is Pure Barre, an exercise and retail boutique concept that has opened 265 units since it began franchising in 2009.

“I’d estimate that 90 percent of our franchisees started out as customers,” CEO Sloan Evans explains. “First and foremost, our growth has happened because we have a great end product: our proprietary exercise technique. It has generated lots of brand loyalists and brand ambassadors.” 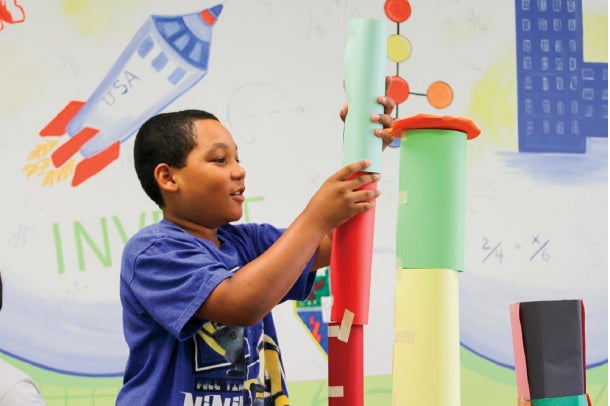 But unlike Engineering for Kids, Pure Barre’s growth wasn’t a complete surprise. In 2012, founder Carrie Dorr decided to step back from the business and teamed with a private equity firm, WJ Partners, which brought in a talented executive staff that included Evans. That group of franchise professionals was able to implement a growth strategy that has helped Pure Barre maintain its position as the first barre workout franchise in many markets, and the largest nationally.

“We’ve invested heavily in expertise and personnel ahead of our growth,” Evans explains. “And we provide franchisees with support from the day they are approved, giving them access to experts in real estate, construction management, franchise operations, consulting and  marketing, and technical experts for their barre instructors.”

Evans admits that no matter how much the corporate side prepares for growth, it’s the franchisees who hold the fate of the company in their hands. “Our clients walk in the first time because they hear about the physical benefits of our workout,” he says. “But what keeps them coming back is the community that our franchisees create. You can’t manufacture passion, and our franchisees are passionate about the brand and affecting people’s lives. When we look at surveys, we realize that the environment created by our franchisees is much bigger than the fitness elements.”

To that end, he says, Pure Barre’s growth is dictated by the number of truly great franchisees who apply. “When it comes to franchisees, we want to make sure we’re making the best decision we can, and we only want to move forward with the strongest franchisees,” Evans says. “We want them to feel comfortable dealing with our team, which they’ll be working with for the next 15 years.”

Connecticut-based Green Home Solutions, which launched a year and a half ago with just three people, is already up to 22 corporate employees and 150 franchisees. Chief cultural officer Russ Weldon believes the system could hit 500 by the end of 2015.

That might seem like a lot—perhaps too much—for a young company, but Green Home, which offers nontoxic mosquito, mold and odor control, has an ace in the hole. As a mobile franchise with a low financial commitment and no need for leases, the company is able to get franchisees up and running fast. What’s more, Weldon has deep franchising experience—he founded Wireless Zone and grew it to 400-plus units before selling and joining CEO Jon Antolini at Green Home—so he doesn’t need to constantly reinvent the wheel. “Franchising is second nature to us,” Weldon says. “We don’t have to make the same mistakes I made the first time around.”

The other reason growth is so fast—and so important—for Green Home is that the types of services it offers are just gaining traction among customers. Getting first-mover advantage and establishing itself as the most trusted name in the industry is important to the company, which anticipates that many more players will get into the field. That means staying on top of the natural solutions that are coming onto the market—such as a new treatment for pet odor—and deploying them quickly.

“We’re in the right place at the right time,” Antolini says, pointing out that green services are an emerging market that is the next step for people who are already trying to avoid pesticides and toxic chemicals in their food.

HUMAN Healthy Markets is another company banking on consumers’ desire for safe, healthy alternatives. Beginning in 2008 licensing vending machines, it became a franchise two and a half years ago. The company now places vending machines stocked with healthful options in schools and health clubs but devotes most of its efforts to putting small, self-serve markets in office buildings and corporate environments. The system, which counts more than 145 franchisees, with 50-plus markets and more than a thousand vending machines, is adding four franchisees per month.

Though growth has been steady, it has taken co-founder Sean Kelly five years to figure out his emerging industry and to refine his business model and growth strategy. Now, with all the pieces in place, he expects even more robust expansion.

“In terms of growth strategy, it’s the No. 1 thing to bring in the best talent,” he says. “We’re just very, very focused at the headquarters level on bringing in the best people to support our franchisees and grow our system. It means our great support for franchisees gets better every day.”

But Kelly has come to realize that the type of franchisee he recruits needs to change. In the past, about 80 percent of HUMAN franchisees have been part time, using the vending machines as supplemental income. But once franchisees reach 20 or so machines and markets, they typically don’t have the capital for growth, or time to service all their units. Kelly hopes to switch that ratio over time, continuing to sign up about four franchisees per month, but with 80 percent committed to HUMAN full time.

“At the end of the day, we want the average franchise to come in at twice the size. It doesn’t mean we won’t take first-time entrepreneurs, but we want most people to be further along in their careers, with more liquid capital,” Kelly explains. “When you dedicate 40 hours instead of 20 hours to the business, you’d think you would get twice the result. But no, you actually get four to six times the result.”

Still, for Kelly, growth is important beyond the financial returns. As a B Corporation, with goals in its charter beyond the bottom line, he’s interested in expanding his company to make an impact. “The reason I’ve been so passionate about growing this company,” he explains, “is that our goal is to help people become the most ideal versions of themselves and maximize their productivity. At the end of the day, if you don’t eat healthy, it’s very tough for you to reach your highest potential.”

What is Good Content and Why Does it Matter for Your Marketing?