How History and Adversity Pushed an Entrepreneur to Shark Tank Success

By John Brubaker January 25, 2015
Opinions expressed by Entrepreneur contributors are their own.

An entrepreneur’s two greatest teachers are often history and adversity.

In the early 1900s, the city Enterprise, Ala., was thriving, but its economy was almost completely dependent on cotton crops. In 1916 an infestation of boll weevils wiped out almost all its crops. Financially devastated, the farmers resorted to planting a new crop: the peanut. It turned out that peanuts were resistant to the boll weevil and four times as profitable as cotton. By diversifying and reinventing themselves, just two years later many farmers became wealthy and Enterprise became the largest producer of peanuts in the U.S.. Others who refused to change went bankrupt and lost their businesses.

A century later history repeated itself 40 miles east of Enterprise in Dothan, Ala., an economy driven largely by real estate. A lot of jobs were lost and businesses closed in 2007 when the real estate and mortgage bubble burst. Success leaves clues and in some cases it’s about invention -- in others it’s about reinvention. In this particular case it’s about a man who has done both: entrepreneur and Shark Tank contestant Travis Perry. 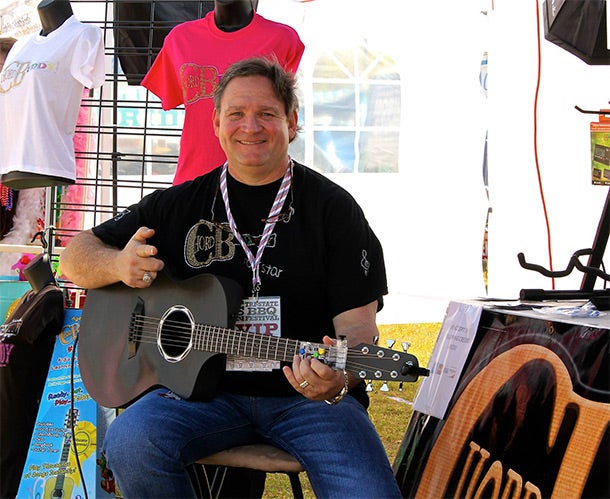 Perry’s thriving 25-person real estate business, Wiregrass Realty, closed as a result of that burst bubble. A month away from declaring bankruptcy, Perry turned to giving guitar lessons at a local music store. He quickly found that 70 percent of students quit within the first two months. This led him to invent a solution that took the complexity and pain out of learning.

He invented the Chord Buddy, a magical device that attaches to the neck of any guitar and has color coded buttons to help people learn how to play guitar chords on their own in two months. It’s to the guitar as training wheels are to a bike. Users have a 90 percent success rate. In 2012, Perry applied to be on Shark Tank, knocked the investors' socks off and went from zero to $3 million in sales in a year and a half.

There are certain people you encounter who, by their example, make you want to be a better person. Perry is one of those people. Through the time I spoke with Perry he shared some outstanding re-invention advice for entrepreneurs that prompted me to more closely examine and rethink how I do what I do. I hope it does the same for you. Here are the top takeaways from the guitar man:

The Chord Buddy product itself is a great metaphor for entrepreneurship. Regardless of the complexity or failure rate of the endeavor, if you can break it down into systematic, simple, doable steps you will be successful.

2. Our goals need to stretch our comfort zones, but not our bandwidth.

Perry had an initial run of 5,000 units produced and was hoping to sell 1,000. He wound up selling 12,000 in the first month, making $175,000 on the first night his Shark Tank episode aired. Expand your capacity along with your growth goals. His web host couldn’t accommodate all the traffic and they had to hustle to upgrade.

Diversification is key, especially if you sell a training product that teaches the user not to need it anymore (such as Chord Buddy). By offering accessory products that are a natural extension of your brand it allows you to become the go-to resource for your customers and build a long-term relationship with them. As they grow, you can grow with them.

Chord Buddy is still the core item of Perry's business, representing 71 percent of sales, but by diversifying into selling guitars (25 percent) and accessories (4 percent), he has solidified ongoing customer relationships.

Perry never aspired to become a guitar manufacturer but he saw a void in the market and capitalized on the opportunity to fill it. There wasn't a quality product at a beginner’s price and there were no half-sized guitars for children age 4 to 7. He filled the voids in the market with Perry Guitars and the market has rewarded him handsomely. What voids exist in your market?

“The best laid plans don’t always work and you need to adapt when your plan doesn't go according to plan, because it won’t,” Perry says.

He expected folks in the guitar industry to embrace Chord Buddy and the public to take some convincing on its effectiveness. It worked the other way around. Perry had to completely reinvent the way he went about marketing and educating retailers. He mentioned that it was a great reminder that “we do things the way we do it because we think it’s the best way.” The key was finding a way to gently convince experts there is a better method than how they’re doing it. He met resistance for 18 months from retailers before finally breaking through.

After interviewing dozens of product designers all over the country, he hired a designer in Indianapolis for one simple reason. The designer’s son struggled with learning to play the guitar and quit. He was a perfect fit because he not only understood the problem but was also passionate about creating a solution.

Perry’s invention caught the attention of country music star John Rich who agreed to become its spokesman. Music is both therapeutic and a learning tool, which sold Rich on its utility. The company donates product to children’s hospitals and is also used in math curriculums in schools. How are you doing good in your community?

Perry easily could have outsourced the manufacturing of his product to China for pennies on the dollar. He chose to keep the product made in his hometown of Dothan, Ala. It meant a lot to him to offer jobs to people in his community when they fell on hard times. To date he has received countless letters from people thanking him and stating they’re willing to pay a little more for products made in the U.S.

The world needs more Travis Perrys, because the greatest lesson in his story for all of us is that vision trumps circumstance. Just as Perry did, we each have circumstances: financial limitations, sales resistance and intense competition to name a few. Our vision must be greater than our circumstance because every setback sets the stage for a comeback.

The crash of the real estate market was Perry’s boll weevil. He saw it as an opportunity and not a circumstance. What’s your boll weevil and how can you turn it into a peanut?

Related: When to Quit Your Job and Start Your Own Business