Twitter Courts Businesses With Option to Promote Their Most Popular Tweets

Twitter is getting even more serious about promoted tweets. Specifically, who sees them and how businesses can use them.

Yesterday, the social network revealed that it will sell promoted tweets outside of Twitter, on sites like Flipboard and Yahoo Japan. Today it unveiled “quick promote,” a new Twitter ads feature that lets businesses turn their most popular tweets into ads in two clicks, directly from Twitter’s analytics dashboard. 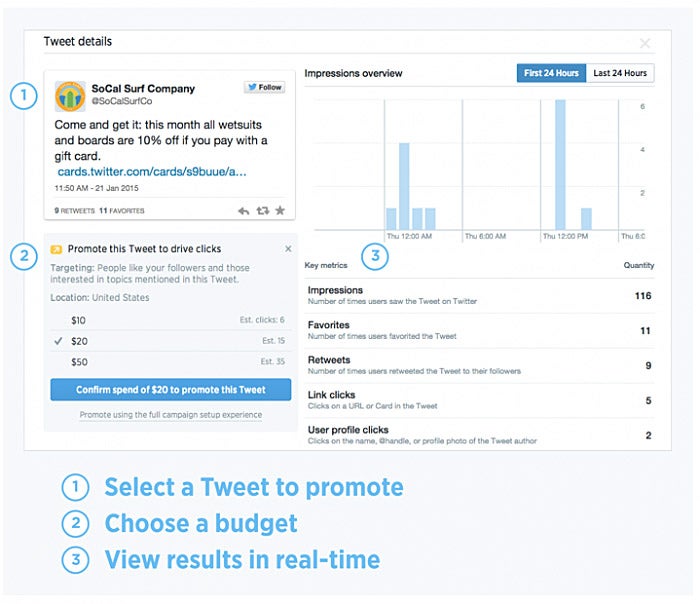 The 284 million-user service announced the new feature on its blog this morning, positioning quick promote as a “a faster and easier way for small- and medium-sized businesses (SMBs) to get their best content in front of more people on Twitter.”

Twitter’s video promoting the new feature suggests that it will come in handy when you’re trying to build buzz around something like a product launch or a seasonal sale. And that added buzz, Twitter says, often spells more customers. “In fact, we found that users who see a relevant promoted tweet from an SMB are also 32 percent more likely to visit that business,” Twitter noted in its announcement.

You must be signed up for Twitter Ads to use quick promote. To give the new feature a spin, head over to twitter.analytics.com and log into your tweet activity dashboard. Then choose a tweet to promote. Twitter recommends picking one that has a high number of total impressions and a strong engagement rate.

Related: Increase Retweets and Improve Engagement on Twitter With These 12 Tips (Infographic)

Next, select a budget. Twitter will provide an estimate of “the reach you’ll see” after promoting your tweet.

Quick promote rolls out worldwide today, only days ahead of Twitter’s quarterly earnings report. It’s the latest in a raft of new features put forth by Twitter. Last week, the company added fresh mobile video and group direct messaging options to its growing bells-and-whistles lineup. It also recently launched a new, Facebook-like Recap “while you were away” feature.