In the latest episode of "Shark Tank," Christopher Gray, the cofounder and CEO of scholarship database company Scholly, left the Tank with a big smile. He'd just gotten the exact deal he wanted with two Sharks, Lori Greiner and Daymond John.

The investors, on the other hand, weren't so happy. Left by themselves, a yelling match ensued that caused Robert Herjavec, Kevin O'Leary, and Mark Cuban to walk off the set in disgust.

The Sharks regularly battle each other for deals, but it was the first time a fight got personal. We asked Greiner and Gray to break down exactly what happened and provide their perspectives on the events.

In the season six segment, Gray walks into the Tank asking for $40,000 for 15% of his company. He explains that $100 million in scholarships go unused every year, and that Scholly is a simple smartphone app that matches students with hundreds of higher education scholarships they can apply for, tailored to their demographic and home state.

Gray and his two siblings were raised in Birmingham, Alabama by a single mom with a low income. Budgeting was so tight that despite his high GPA and test scores, he could not apply everywhere he wanted to for college due to application fees. But with some digging, he was able to get a whopping $1.3 million in scholarships, including a full ride from the Bill and Melinda Gates Foundation.

He enrolled at Drexel University and built Scholly with web developers Nick Pirollo and Bryson Alef. It's been less than a year and the Scholly team has had 92,000 app downloads for 99 cents each. 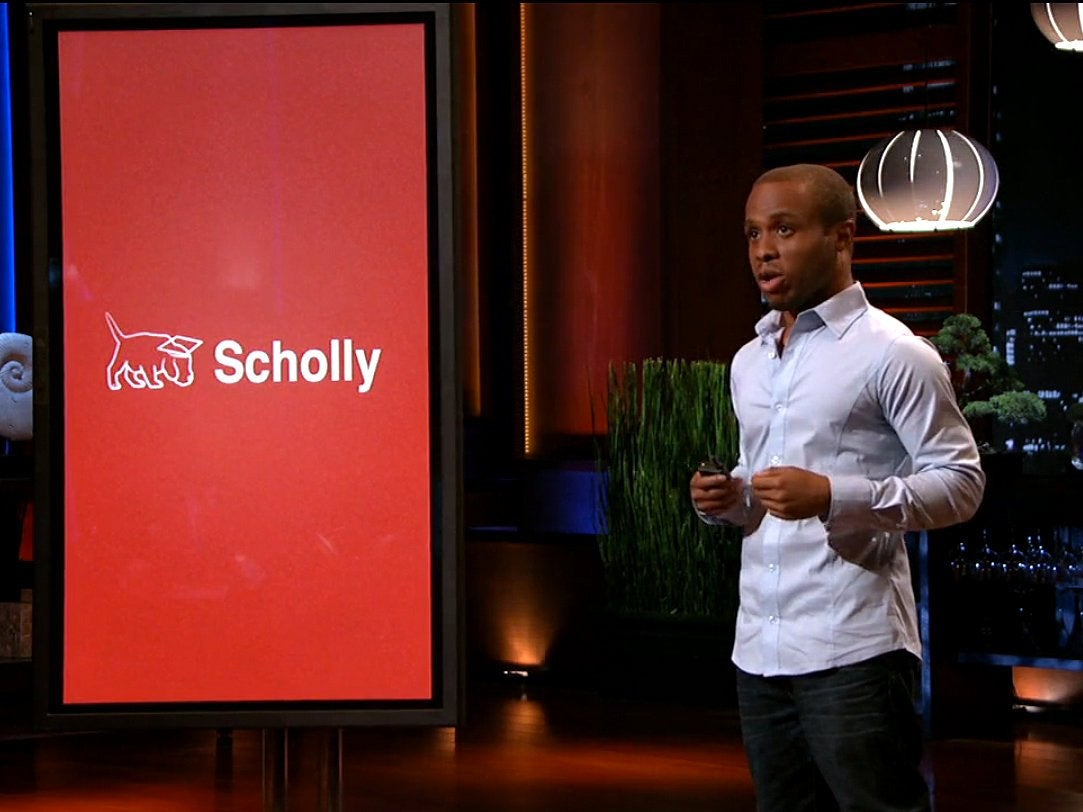 Every investor is interested, and John and Herjavec, who both grew up poor, tell Gray they can relate to him and admire his tenacity.

Greiner makes an offer in what seems like a few minutes into Gray's pitch. She tells Business Insider it was actually about 10 minutes in real time, before editing. Either way, it's very fast for the show, where it usually takes about an hour for all of the investors to decide if they want to make a deal or not.

"You know what, Christopher?" Greiner says. "I'm going to do something I've never done before. I haven't heard a whole lot, but I'm going to make you an offer right now." She offers exactly what Gray had asked for — $40,000 for 15% equity.

Cuban, frustrated, asks Greiner if he can first ask some real questions to learn about the company.

Greiner stays focused on Gray. "I believe in you. I believe in what you're doing," she says, which gets the other investors visibly perturbed.

Gray expresses his appreciation but says he still wants to hear what everyone else has to say. Greiner clarifies that she's not even going to ask how he plans on scaling the company and making a profit.

Seeing how aggressive she's being, John jumps in and says he wants to invest because it's "personal" for him. He wasn't able to go to college, he says, because he lacked funds and needed to support his family, and he wants to help give others an alternative. He and Greiner eventually decide to split the offer 50/50. Gray says he'd still like to hear from the others.

Herjavec, the founder of a large cyber security firm, and Cuban, a serial tech entrepreneur and investor, understand the smartphone app business very well and want to know more about how Scholly's algorithm works and what the developers' skillsets are.

It's also deeply concerning for them and O'Leary to discover that there are only between 10,000 and 20,000 scholarships in Scholly's database. Cuban and Herjavec need to know more to determine if they can scale the business. Greiner starts talking over them to say she and John don't even care about those questions. John sticks with her and says they'll figure it out as they go, and work with the other "Roberts and Mark Cubans of the world" to help them.

Greiner tells Gray that he needs to make a decision right now or she's out. He happily takes the deal.

After Gray exits the room, Cuban squirms in his chair, restraining himself from an outburst. 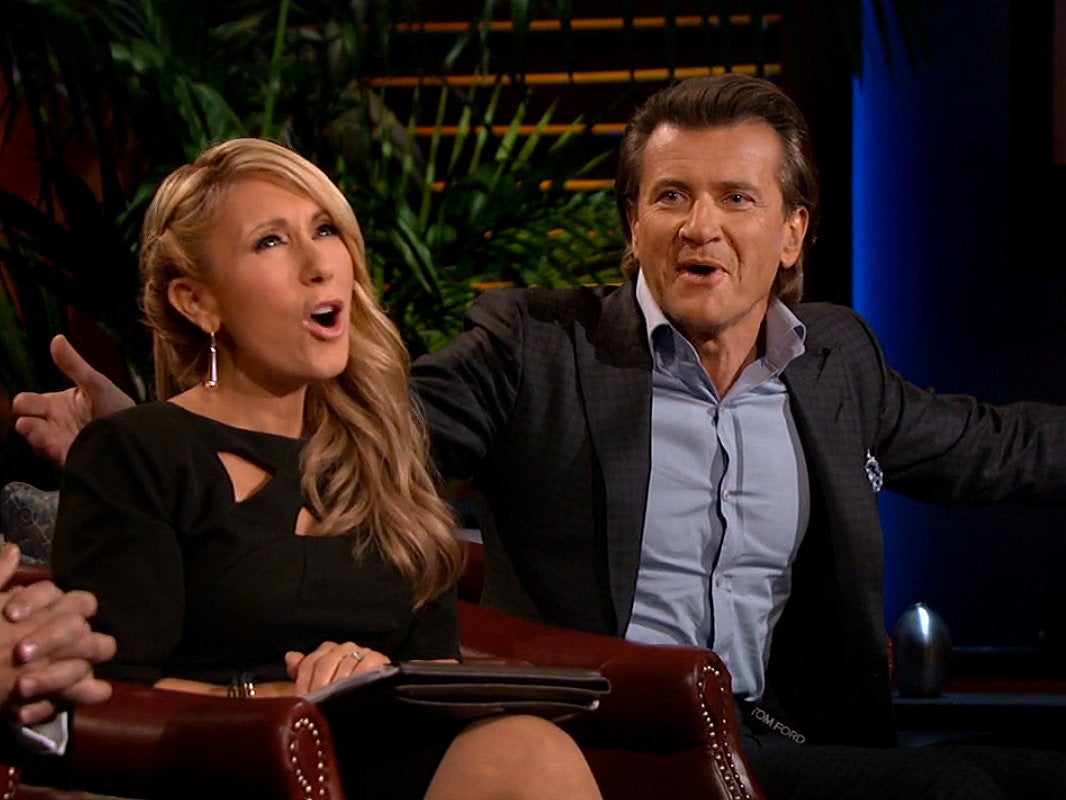 Herjavec turns to the other investors and then locks his gaze on Greiner. "You know, when I had nothing and couldn't rub two pennies together, you know what I really hated?" he asks. "I hated when people wanted to give me a break because they felt bad for me."

He adds that he thinks Gray is a great guy, but that neither Greiner nor John have any idea how the product they just invested in works.

A fight follows, with the Sharks yelling and shouting over each other. Here's a synopsis of each of their positions in the brawl:

Greiner doesn't back down from her position. O'Leary and Cuban grab their belongings and walk out of the room as Greiner keeps talking and John stays behind.

After the premiere on Friday, the Shark not in attendance, Barbara Corcoran, noted on Twitter that she also would have walked out on Greiner and John if she were present.

"In regards to the Shark fight," Greiner tells Business Insider, "every Shark has a unique approach to business. We're like a family, and we are not always going to agree."

In a previous interview, John said that in the Tank, "it's all in the moment. And in the moment, it does get personal here and there. None of it is for the camera." He adds: "There is real stuff at stake. There's real money, and there are also real egos."

Greiner explains her decision to invest in Scholly:

Within about 10 minutes of Scholly's pitch to the Sharks, I had heard enough to know that Scholly was already doing well, and it was clear Chris was a very smart entrepreneur. I didn't need to hear a lot more; the algorithm was already working, and I knew going forward anything else we could figure out together. It was shocking to learn that $100 million in scholarships go unused each year. I wanted to get behind Scholly to help bring these scholarships and aspiring students together.

As for Gray? He enjoyed watching the post-pitch drama unfold during the episode's premiere on ABC, and he couldn't be happier with the deal he got. He says that he wasn't shaken by the accusation from Herjavec, O'Leary, and Cuban that Greiner and John were taking pity on him, since he could have addressed any questions regarding his app's backend and growth potential.

"I could have easily answered any questions Mark, Robert, or Kevin asked, so their opinions did not bother me," he says. "However, Daymond and Lori gave me exactly what I asked for and were willing to go in together. They are savvy investors who saw Scholly's potential right from the start and those are the sorts of investors I want."

As for the business, Scholly shot up to No. 1 in the iTunes app store following the premiere of the episode. Greiner says that the team has "just re-launched an enhanced website and the database is fully up to date and growing."

Gray says that Greiner and John have "already made some incredible introductions and added a lot of value to Scholly."

And being the center of the biggest Shark fight yet doesn't bother him.

"I wasn't in a bad position, but a good one," he says. "I loved it, and I am really happy about the outcome!"