Trippy 'Treps: HolidayME Says That You Can Set Up Your Entire Vacay in Just a Few Clicks

By Kareem Chehayeb February 24, 2015
Opinions expressed by Entrepreneur contributors are their own.
You're reading Entrepreneur Middle East, an international franchise of Entrepreneur Media. 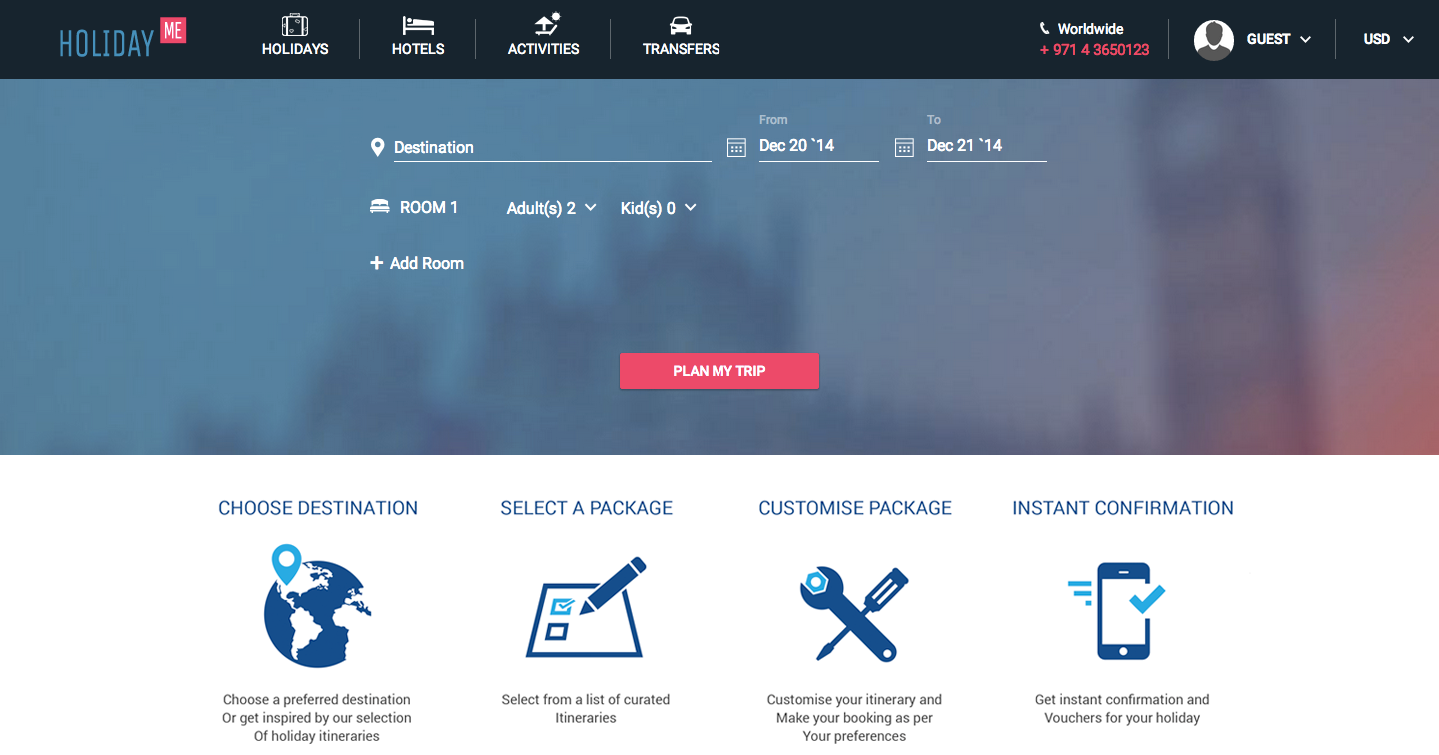 Who doesn’t look forward to their next holiday? You’re probably thinking about your next trip as you read this. That said you probably aren’t thinking about the hassle of it all; after all, it’s a lot more than just booking plane tickets. Do endless tabs on your web browser of hotels, things to do, and little to no time to figure things out ring a bell? Two Dubai-based ‘treps, co-founder and Managing Director Digvijay Pratap and co-founder and CEO Geet Bhalla, are trying to put this to an end to this hassle with HolidayME. “We were convinced that the market needed a simplified platform to plan and book a holiday experience with a few simple clicks,” explain the co-founders. Self-proclaimed avid travelers Pratap and Bhalla make a solid team with their different skillsets. Pratap holds a Master’s degree in Computer Applications, and has worked as a software engineer for various businesses in different industries, from hospitality to e-commerce while Bhalla has spent the last 15 years in finance and banking technology.

What makes HolidayME stand out from its competitors? Everything is in the customers’ hands. Sure, you can book flights and hotels through other platforms, and maybe even have a bunch of packages to choose from, but HolidayME lets you customize. The co-founders proudly claim that HolidayME contains a “wide inventory of over 1,00,000 hotels, 8,000 sightseeing activities and airport pick-up and drop facility across 300 cities globally.” A small team of “five people out of a small garage sitting across from each other, brainstorming and exchanging ideas,” eventually turned into a multinational venture with offices in the UAE, India, Saudi Arabia, and a team consisting of over 85 people. The co-founders approach to HolidayME focuses on the technological aspects “right from the onset, we wanted to create proprietary technology and IP.” Long story short, it was indeed capital intensive. 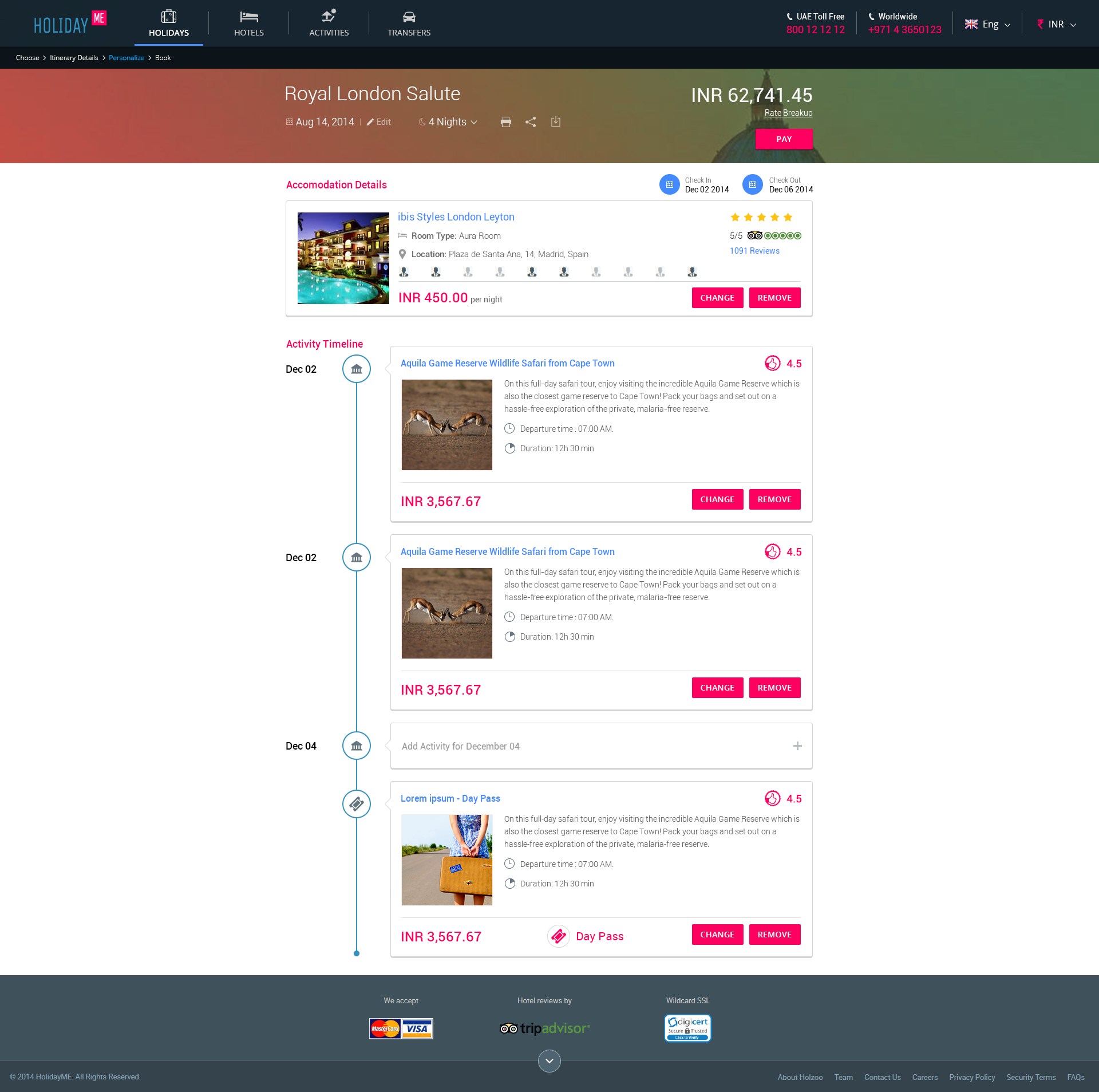 When it comes to money and finances, HolidayME’s current situation looks nothing like it did in its early days. The co-founders are enjoying a “Series A funding of US$4 million by a consortium of investors led by the Al Sanie Group based in Saudi Arabia,” making bootstrapping a distant memory. They chose not to comment on return on investment projections, stating that their “focus at the moment is not ROI, but to grow and capture this evolving market.” Bhalla and Pratap have stressed on the importance of effective marketing to stand out in a sector some would call saturated. The co-founders “have already started with online campaigns through paid search, display and social channels,” and kicked off above the line (ATL) advertising campaigns this month. Social media plays a huge role in their marketing campaign- HolidayME can be reached on various social media platforms, with the co-founders mentioning Facebook, Twitter, and Pinterest. That said, they both believe that Facebook “from a business perspective” is their favorite platform, noting admin access to detailed analytics, plus its high user base in the region.

So how have folks received HolidayME so far? The co-organizers are quite pleased with what they’re seeing; what they’re happiest about isn’t just website engagement, but “it’s particularly reassuring to notice so many users using the customization option to build their itinerary and make a booking.” Most popular holiday destinations thus far on the portal? “We are getting major queries for European and Asian markets including the popular touristic destinations like London, Paris, Amsterdam, Thailand, Turkey, and Egypt. There is also great demand for Dubai packages.” Next up for the startup is growth, and they’re currently focusing their energies on targeting Middle Eastern markets, specifically the GCC and Egypt, and plan to launch an Arabic website in the near future. When asked about targeting India, where they currently have some presence, the co-founders admit that the Indian market is something they aren’t interested in at this point in time, and that they simply “drive [their] technology development from our office based in India.” Travel buffs who want to use HolidayME via their mobile device can expect an app later this year, and both Pratap and Bhalla recognize the skyrocketing amount of mobile internet usage in the region.

When asked about which MENA city harbors the best entrepreneurial ecosystem, the co-founders chose Dubai, citing its “culture and financial landscape.” For now, with funding secured, the main concern for these ‘treps will be to continue to onboard users, and actually get them to use their services. Maybe it’s time to take a trip!

Should You Stay on After Your Startup Is Acquired?