Motorola's Moto E 'Press Conference' Is Like Nothing You've Ever Seen

By Emily Price February 26, 2015
Opinions expressed by Entrepreneur contributors are their own.

Wednesday morning, boxes were delivered to mobile press around the globe. Inside was a 3-D model of a press conference, complete with a tiny stage and cutout of Motorola’s president and COO, Rick Osterloh.

Related: This Might Be the Least Expensive Smart Lock Yet

The press conference was prerecorded and available for reporters to watch at their own speed, focusing on what they were most interested in first. Once it was over, your review unit was on the stage for you to grab and play with, if you weren’t already doing so during the presentation. The back of the box stowed some of the accessories set to come with the device such as colored bands and a grip shell case.

Entrepreneurs should take note of the creativity behind Motorola’s Moto E press outreach. “More companies should problem solve through their marketing challenges like Moto probably did with this one,” says Eric Samson, founder of the marketing consulting firm Group8A. By thinking through how they were going to get coverage for the phone during one of the biggest weeks in mobile news (with Mobile World Congress starting in a few short days), the company came up with a truly unique solution.

“We took the same principals for the press conference as we did for the product,” Adrienne Hayes, Motorola’s head of marketing and communication tells Entrepreneur.

The new Moto E has a 4.5-inch display, quad-core processor, and a battery the company says makes it capable of running all day on a single charge. The unlocked phone ships running Lollipop, the latest version of Android. Extra software allows you to launch the phone’s camera by just flicking your wrist, and the company’s Active Display feature shows you your notifications as you’re pulling your phone out of your pocket.

Related: New Office Tech You're Going to Crave This Year

It’s designed to be both personalized and simplistic, which was also the idea behind the virtual press conference. “We thought this was a much more convenient format for the end user,” says Hayes. “The first thing was putting the audience at the center and in mind first, and we thought  that doing this would be a lot more convenient for the media and solve the pain point of having to go to numerous press conferences and running around at one of the industry’s biggest trade shows next week.” 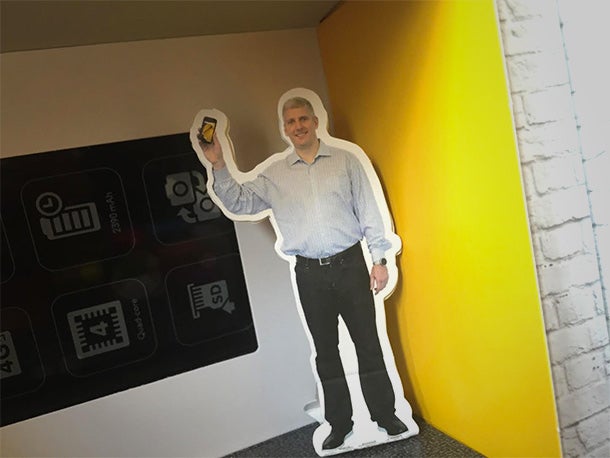 The concept of the press conference in a box was actually something the team had been kicking around for a while, but an idea that really made sense with this launch. The Moto E is the company’s most affordable smartphone. Doing a press conference this way was more cost-effective than holding a large event, both for the company and attendees who would have to shell out cash to fly to a location-based event.

It’s an idea that Samson thinks will pay off even more. “You get this fun little package and it’s unique and exciting, I think emotionally it puts the journalist in a happier, more positive place, and I think that will definitely effect their reaction to the product.”

Samson thinks that the move might not only garner more press for the phone than it might have gotten otherwise, that the press will be better for the phone since it was presented in such a fun way and without the stress of travel surrounding it.

“You increase your reach maybe tenfold,” he says. Reach that could mean bigger sales for the entry-level phone.

How to Leverage Artificial Intelligence in Public Relations

The Power of Purpose: How a Mandatory Staff Meeting Brought My Team Closer Than Ever Before