It may already be too late for Palmer Luckey to start looking over his shoulder.

That’s because VR Union, a two-year old startup based in Prague, has leapfrogged his advances in virtual reality by creating virtual-reality goggles with a display that is triple the resolution of anything else available on the market.

VR Union isn’t widely known, but that’s likely to change. Its breakthrough—ultra-high definition, or “4K” in industry parlance, head-mounted displays—brings the VR world closer than ever to a fully immersive and believable experience, one that seems drawn from The Matrix.

“We believe that VR is on an inevitable path to higher-resolution, better-quality displays,” says Michael Buckwald, CEO of Silicon Valley-based Leap Motion, a company that has developed a platform for motion control in VR. “4K is an exciting next step to make VR more immersive.”

When 22-year-old Luckey sold his company, Oculus VR, to Facebook  FB 0.70%  for $2 billion in 2014, the deal signaled that virtual reality, a technology that has existed for decades, was again worth paying attention to. Irvine, Calif.-based Oculus is credited with developing the world’s first commercially viable VR goggles, but its Rift headset has been criticized for its relatively low-resolution display. Its latest generation DK2 headset displays four million pixels, or roughly the equivalent of a high-definition TV.

VR Union, on the other hand, has developed and commercially deployed a display with 12 million pixels, a resolution seen only on ultra high-definition TVs and tablet computers.

“Once here, 4K head mounted displays will certainly add to what VR content and app developers can work with in terms of being able to deliver quality VR experiences,” says Brian Blau, research director for consumer technology at Gartner, the market research firm.

The Holy Grail of VR, of course, is to create an experience that makes it impossible for the user to distinguish between fiction and reality.

In its Claire headset, VR Union repurposes liquid crystal display, or LCD, technology—the same kind of high-resolution IPS panels manufactured for computer displays and smartphones. IPS technology, which dates to the 1980s, can efficiently change the direction of liquid crystal molecules to create vivid colors with strong contrast. In contrast, Oculus uses AMOLED—active-matrix organic light-emitting diode—display technology that is newer but sacrifices image quality for faster pixel response, a desirable feature in the fast-paced gaming environments for which the Rift headset is intended.

“We found IPS technology to be exactly what we needed to create the immersive cinematic experience we were looking for,” says Karel Hulec, 23, co-founder of VR Union. Hulec dropped out of his university studies to found the company. 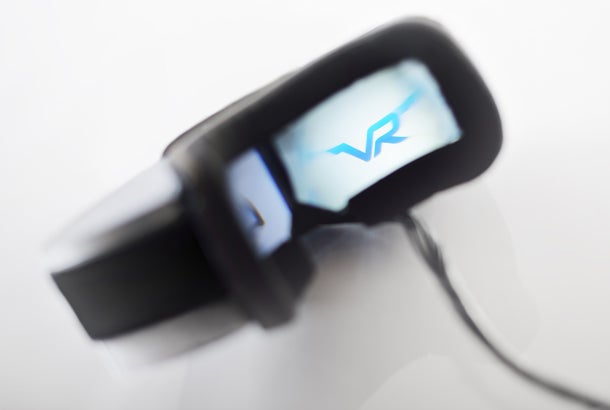 VR Union also found a way to leverage Fresnel lens technology, originally developed by French physicist Augustin-Jean Fresnel for lighthouses in 1823. The tech allows for a nearly 180-degree field of vision and makes it possible for users to wear prescription glasses inside the headset. In contrast, Oculus uses a conventional heavier aspheric lens, similar to a handheld magnifying glass, that offers a 100-degree field of vision. VR Union says the conventional approach disturbs complete immersion by creating the effect of peering through two short tubes.

Dozens of display companies, including Sony  SNE -0.07%  and Samsung, are vying to become the global standard for VR goggles before they become a mainstream device.

VR Union has deployed its technology in a commercial environment by hooking up with FlyPrague, a VR experience launched in 2014 that takes tourists on a Peter Pan-style flight over the medieval towers and spires of the Czech capital. “Resolution is definitely the most critical point,” says Martin Ralis, 29-year-old co-founder and CEO of Prague-based Flight Tours, which launched the FlyPrague experience. VR Union is also selling its VR goggles to amusement parks in China.

Ralis believes other industries, including such as real estate and travel, will want to use high-definition VR technology. “Show me someone who would rather watch a promotional video than explore the Left Bank in Paris or a Mayan ruin,” he says. “The global standard for VR will be set by 4K resolution, just as color TV became the global standard when it first appeared.”

Reiner Schneeberger, director of Germany’s Programmed Art Foundation, a non-profit trust dedicated to digital art and VR, says the industry is on the cusp of a VR system that businesses can use. “Apart from resolution, the breakthrough at VR Union is in integration,” says Schneeberger, a 57-year-old pioneer of VR who in the early 1990s developed one of the first ever gaming chairs that moves in response to the action on the screen. “It’s in the company’s ability to create a stable 24/7 solution for a satisfying customer experience.”

Meanwhile, the arms race continues. Facebook-owned Oculus is expected to release the successor to its DK2, code-named Crescent Bay, in 2015. For its part, VR Union is developing 5K goggles. “We’re quite close to making it work and putting it into small batch production in February 2015,” Hulec says. The company is also talking with Konica Minolta and Leap Motion for commercial-scale production that goes far beyond gaming and home entertainment.

“Virtual reality will impact our lives mostly as a completely new workspace,” Hulec says, “and as a new social and educational experience.”

KFC and Walmart Are Using VR to Train Employees. Here's Why Your Company Should Too