Your Next Family Member May Be ... A Robot

By Cadie Thompson March 27, 2015
This story originally appeared on CNBC

Robots are about to get a lot more personal.

Whether in the home or the workplace, social robots are going to become a lot more commonplace in the next few years. Or at least that is what the companies bringing these personalized machines to market are hoping.

What are social robots?

Social robots are about bringing technology to the everyday world in a more humanized way, said Cynthia Breazeal, the director of the personal robotics group at the MIT Media Lab and the chief scientist at the robot company Jibo.

While household robots today, such as the Roomba, perform mundane chores, social robots will be much more like companions than mere tools, Breazeal said.

For example, these robots will be capable of understanding social cues and will be able to distinguish when someone is happy or sad. This allows them to respond more appropriately to the user, she said.

"Social robots humanize our interaction with technology," she said. "It doesn't feel like a device, it doesn't feel like this flat thing that you have to go pick up and use. It feels like one of the group, it feels more animated."

The Jibo, which is slated to ship later this year, is designed to be a personalized assistant of sorts. You can talk to the robot, ask it questions, and make requests for it to perform different tasks.

The robot doesn't just deliver generic answers to questions, it responds based on what it learns about each individual in the household, the company said.

It can do things such as remind an elderly family member to take their medicine or snap candid family photos.

Jibo aims to make its robot as common as the household tablet computer, Breazeal said. But unlike a tablet, the Jibo robot is a platform that is much more interactive and works in a way that is more natural to humans, she said.

"There is all of this amazing content trapped behind flat glass, and with these robotics with technology like Jibo, that content can finally be brought to life in a way that is much more humanized." 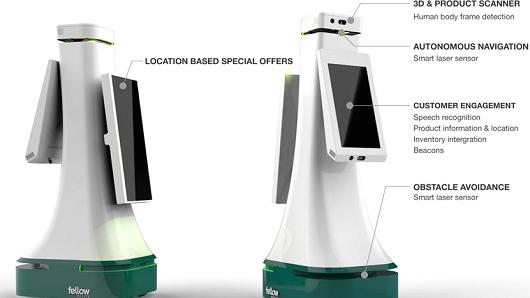 Fellow Robots is one company bringing social robots to retail. The company's "Oshbot" robot is built to assist customers in a store.

Last year, Fellow Robots partnered with Lowe's to develop Oshbot, which basically acts like a sales assistant that can help the customers find items and help guide them to the product's location in the store. It can also speak different languages and make recommendations for different items based on what the customer is shopping for.

The more interaction the robot has with humans, the more it learns, said Marco Mascorro, Fellow Robot's founder and chief technology officer.

But Oshbot, like other social robots, is not intended to replace workers, but to work alongside other employees, Mascorro said.

"There is this idea that robots do things for people, but this is a different paradigm," Breazeal said. "There is a shift in social robotics of training technologies that don't do things for us, but do things with us."

Cadie Thompson covers all things tech for CNBC.com. She has also written and produced for NetNet -- where she covered Wall Street -- and Consumer Nation, where she wrote about trends in consumer technology.

Could This Robot Actually Be Your Marketing Writer?

Give Them the Gold Medal! Watch These Robots Backflip and Balance Beam in Sync in Fascinating Video

Is Blue Monday the Most Depressing Day of the Year?

Eat These 3 Breakfast Foods to Improve Your Focus

Here is Why Growth Investors Should Buy AutoNation (AN) Now