Most people use spreadsheets to track cold, faceless data, not matters of the heart. Lisa Conquergood, 45, is different. She uses them to track how much time she spends with her two children between stretches of work.

“After I became a mom, I didn’t want to leap into work and leap away from my child, so I freaked out a little bit and I made this spreadsheet to make sure my son was with me and my husband more during his waking hours than he was with the babysitter,” she says. “It worked, so I stuck with it.”

That was when the Seattle native had only one child, years before she co-founded PicMonkey, a user-friendly web-based photo editor, with four former colleagues from Picnik, a startup Google purchased and shut down. Conquergood now has two little ones, only they aren’t so little anymore. They’re 13 and 15 and growing like weeds.

From day one, Conquergood has been a working mother, but always on her own terms, she says, not on her employers’. “Having a child changed what I thought my career trajectory was going to be, but I decided early on that I didn’t have to lose control of my career because of it. I said yes, I can do this. I can carve out time with my kids and balance that and still be effective, efficient, present and visible at my company.”

Conquergood was working in corporate ecommerce at apparel retailer Eddie Bauer back in 1999 when her first son was born. At the time, the company's standard maternity leave was three months. She took four. “If you want me to come back with a full heart, I need to have four months,” she recalls telling her employer. “It wasn’t easy to say, but I just said it and they said yes.”

She also negotiated that she would return to work on a part-time basis when her four-month leave was up, but that never came to pass. Eddie Bauer intensified its ecommerce efforts and asked Conquergood to lead its online store and the team behind it. The opportunity was huge and she went for it, but it wasn’t a decision that came easily. She agonized over it.

“There were a lot of tears,” she says. “I talked to my husband, I talked to my peers at Eddie Bauer. I didn’t know if I should take the leap. But then a vice president at the company, whom I respected a lot and who had two boys, said, ‘You can do it, you can have it all, it just takes planning,’ and I took the leap. I called and I took the job and I hung up and I cried.”

And so her work-life tightrope act began. She hired a babysitter and enlisted her husband’s help whenever possible. She went to work a little later in the morning than she did before the baby. She says she did what felt best to her and that just happened to be building a master spreadsheet, a digital life preserver to cling to amidst the chaos of motherhood and career. 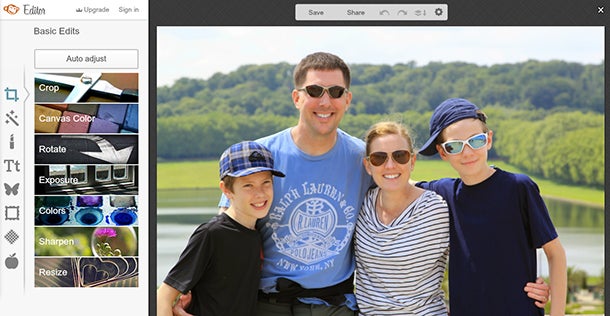 “I kept ahead on the spreadsheet to make sure that things were balanced – that everyone was getting what they needed, at home and at the office – and it kept me together so I could keep it all together.”

When her second son came along in 2001, Conquergood felt she had mostly conquered that ever elusive work-life balance that everyone loves to talk and but few achieve, but it’s still a work in progress and some days are better than others. “The mom guilt, the pressure from all sides, it never really does go away, but the spreadsheet made me feel better. I don’t know if the kids cared, but I certainly did.”

Related: 4 Ways Fatherhood Has Made Me a Better Entrepreneur

Her lifesaver spreadsheet, which basically doubled as a hyper-detailed calendar, helped her track time spent with each boy almost down to the minute, which was important because she was often short on time. She used it to carefully weave regularly scheduled “meaningful moments” with her kids, both away from and at work.

While the spreadsheet gave her a sense of control and “set the tone” for her day, and her kids’, it wasn’t always smooth sailing. Sometimes an important business meeting was scheduled at the same time she was supposed to be at the local Gymboree “Mommy and Me” class. It was an inevitable conundrum all working moms (and, more increasingly, dads) eventually face: She was forced to choose between kids and work. Sometimes the kids prevailed. Other times work did. It was messy and she dealt with it on a case by case basis.

She leaned in plenty, she says, long before Facebook's Sheryl Sandberg penned Lean In: Women, Work and the Will to Lead, but mostly she “sat upright,” as she describes it. “I leaned in when I said no to part-time work as a new mother and yes to a promotion, so I get it. I don’t necessarily disagree with Sheryl Sandberg’s philosophy, but I leaned in and then I sat back and sat up. I took control by prioritizing my time. I’m not saying it works for everyone, but it worked for me.”

Conquergood says sitting upright, as opposed to leaning in, is a more even-keeled approach. “It allows me to say, ‘I’m leaving at 4 o’clock today because I’m going to see my kid’s soccer game and then I’ll be back online to work after 8 o’clock. It’s not feeling like you have to be a workaholic and constantly prove yourself. It’s being more secure in your results and letting those speak for you instead of being at all of the meetings and on all of the business trips.”

While she feels she’s juggling her mom and professional duties pretty well, especially now that her boys are teens and taking on more responsibility than ever before, she admits she still doesn’t have it all figured out. She says she often stays up later than she should working at home, often sitting next to the kids while they do their homework, cranking out emails and reports, glancing at her phone and burning the midnight oil. “I’m tired a lot of the time, but when you have kids, that comes with the territory. It’s just part of the experience.”

Having supportive managers has helped, as has adopting a “don't ask, just do” attitude. Conquergood recalls carefully navigating an all-nighter during an Eddie Bauer website relaunch. Her son was less than one and it was about 7 at night and she and her team were still working hard. She told her boss she was going to run home to put the baby to bed and then come back to the office. Her boss wasn't too thrilled about the idea, but Conquergood did it anyway. “In my mind it was no different than the development team going and grabbing teriyaki and coming back,” she says.

Related: A Millenniall Dad's Strategies to Thrive -- at Home and the Office

That night, when she returned to the office, Conquergood says she cemented her then employer’s trust. She proved that she could be an active, involved hands-on parent and still kick butt at work, just like many of her colleagues at PicMonkey now, including a fellow co-founder who faithfully takes every Friday off to be with his son.

“We don’t bat an eye,” she says. “That’s just what he does, what he feels is right for his family. We created a culture that allows for that.”

She says entrepreneurs are in a unique position to do the same at their places of business. They don’t need anyone’s permission to be there for their kids.

“When you’re an entrepreneur and you own your own company, you’re not beholden to the conventional rules. If that means you want your kids to come in to the office on Fridays, you can do that. Take advantage of it and make your own reality. There are no rules. You make them up for yourself...for your business and for your family.”

Related: How to Rock the Cradle at Home and at Work? Realize a Perfect Work-Life Balance Is Impossible.