By Kareem Chehayeb April 14, 2015
Opinions expressed by Entrepreneur contributors are their own.
You're reading Entrepreneur Middle East, an international franchise of Entrepreneur Media.

You know that an entrepreneur is doing something right when they’re trying to make something easier than it is. In this case, it’s web hosting, something that almost everyone has to deal with, whether you’re an SME or an attention-seeking teenager. “It’s really easy to create a website nowadays (think free templates), literally everyone can do it, and everyone needs it,” says duet.to co-founder Ghaith Akkad. “But when it comes to hosting, it requires fair technical experience that comes with guaranteed hassle.” duet.to, inspired by the Italian word duetto, is another startup by Picasso Interactive, where Akkad has worked on another interesting projects, including holiday-planning web platform Tripzzle.

So what is duet.to all about? It’s a “hassle-free” and “simple” web hosting service. But here’s the catch: it is powered by Dropbox. “We all use Dropbox to store and share documents, designs and all different kinds of files, so why not websites?” Akkad asks. But how does that work? “We created a Dropbox App using a bunch of official Dropbox APIs, particularly [the Delta API]; once called, Delta informs us of what’s been changed in order for us to download the updated files to our servers, and delete what’s been deleted.” In simpler terms, you use a few apps to keep your Dropbox account in sync with your website- very cool. Oddly enough, duet.to does admit that its features aren’t too different from its competition. That said, Akkad is confident that its specific characteristics are enough to win people over, saying, “We believe we came up with a robust technology with better pricing structure and more advanced features.” These include duet.to’s ready-made templates, custom domains, and a content delivery network (CDN) feature that “distributes your website assets across multiple premium servers spread over the world.” 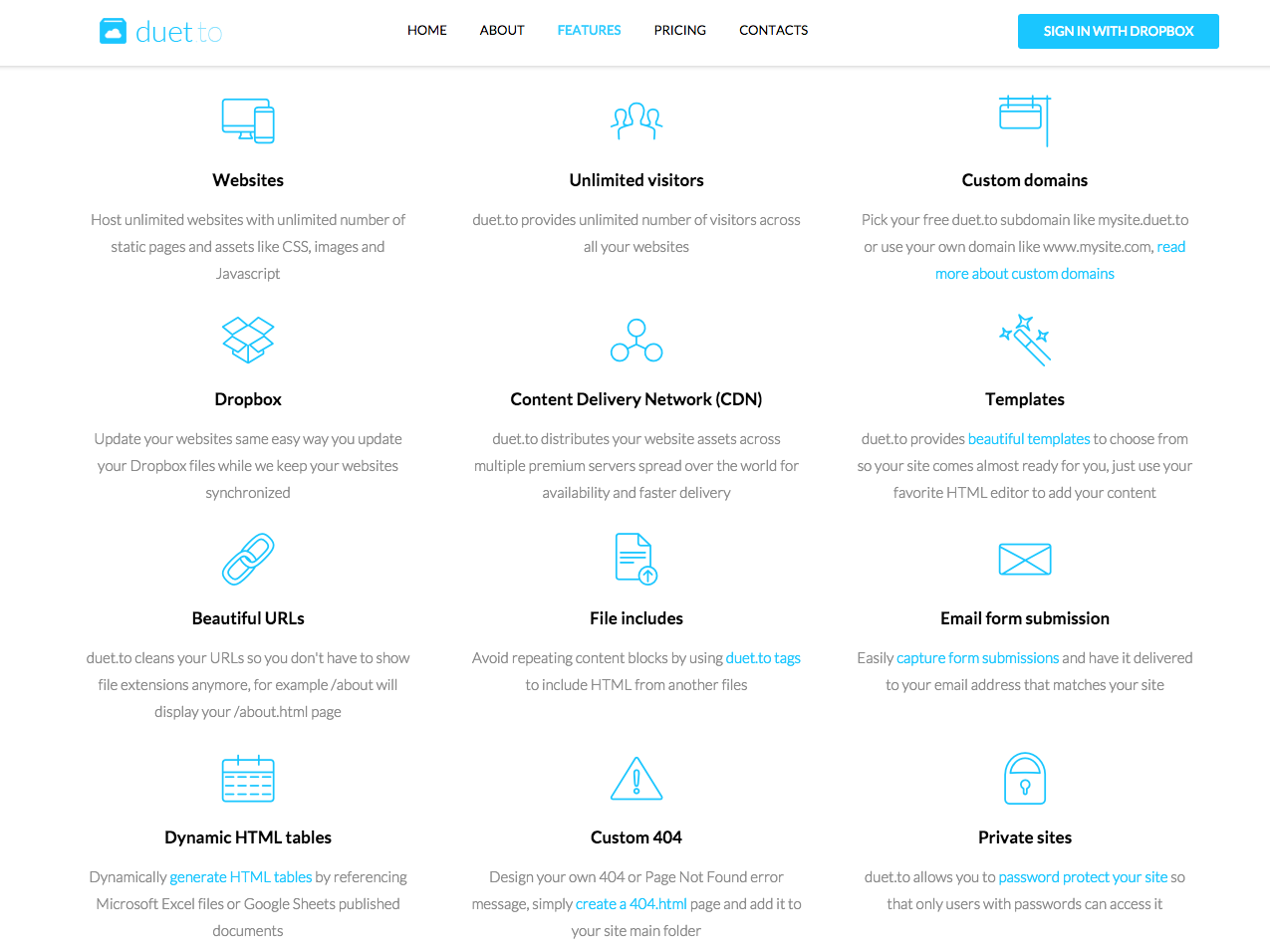 According to Akkad, the development process for duet.to was easy- in fact, it sounds almost too easy. “Dropbox sync is almost instant; all files placed in Dropbox are uploaded within seconds to Dropbox servers,” Akkad says. “We needed to build a smart tool to grab those files and make them available on the web.” He elaborates further, saying that once you set up your duet.to account, you don’t even have to visit it again; you just need to look at Dropbox. And that’s that. I was curious to know more about Akkad’s relationship with Dropbox, and how Dropbox communicates with clients who work on apps based on their platform. Akkad claims that they have a great working relationship, with Dropbox approving duet.to and helping them handle some bugs as well. He adds that there were tons of bugs to fix, so “most of our debugging time was spent figuring out the best way to synchronize users’ local files with our server copy, and then publish those files online.”

Given that duet.to is a Dropbox app, was it a capital-intensive project? Akkad shrugs, claiming that there were only a few costs. “Besides our servers cost there’s an overhead for CDN rental, which distributes our users’ content across the globe for availability and faster access.” Using Dropbox’s interface is free, and more costs are alleviated by the fact that “technology is created in-house.” Apart from servers and CDN, duet.to allocates some funding for marketing. When asked about angel investors, Akkad shoots back: “Got any? Would gladly meet with a potential interested investor.” Regarding ROI, Akkad says that while duet.to is a sustainable venture, they’re working hard on making it a profitable one. 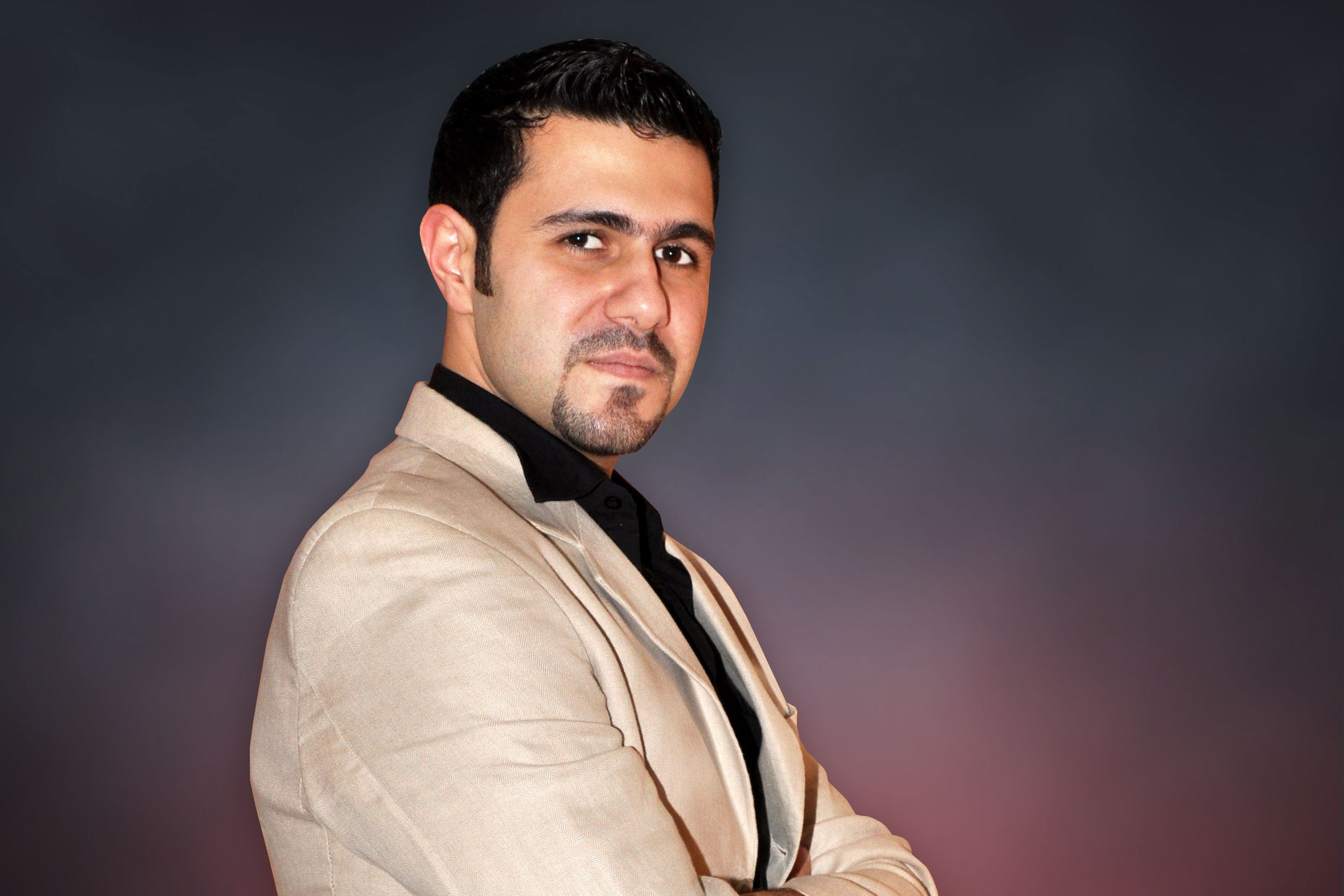 Most of duet.to’s traffic has come in after Product Hunt posted about the app and mentions that interested clients are made up of “designers, developers, and cool entrepreneurs”- their primary target audience. Given that they have seemingly nailed outreach, I had to ask about duet.to’s marketing strategy. “Free-trials and referrals are very useful in our case,” says Akkad. While he also works on social media to promote the brand, he admits that they are “still trying to avoid direct advertising; organic growth is the answer in the meanwhile.” Perhaps that might be a smart option, given that the duet.to brand and brand image is still a work in progress. What are the folks at duet.to cooking up for the future? More marketing. “We need more exposure at this stage, a big enough introduction to the entrepreneur and designer communities,” says Akkad. Is there a potential duet.co mobile app in the works? Given that Dropbox already has a popular app, he said that they have put that thought on hold for a bit. It ultimately depends on whether Dropbox updates its app to allow file editing or not.

Having reported on Picasso Interactive’s Tripzzle for Entrepreneur Middle East a few months back, I also asked Akkad if he’s been busy with any other endeavors in the meantime. Akkad confirms that they’re looking into two new projects, and that they’ve also upgraded Tripzzle’s “ranking algorithm” which he claims will make the platform “smarter.” Before winding up our talk, Akkad says that he’d stick by his previous advice for the region’s ‘treps: “Learn, execute, fail, repeat.”