Taking the Plunge Into a Self-Owned Business

Franchise Players is Entrepreneur's Q&A interview column that puts the spotlight on franchisees. If you're a franchisee with advice and tips to share, email ktaylor@entrepreneur.com

Mike Simon spent more than two decades managing operations for major restaurant chains before he decided -- along with a trusted business partner -- to strike out on his own. "Franchising is in my blood," Simon says. And he's proven that to be true, having transitioned 39 of his 42 Midwest-based restaurants from company stores to franchises. Today, he says he sees continuing potential in the fast-casual pizza segment. 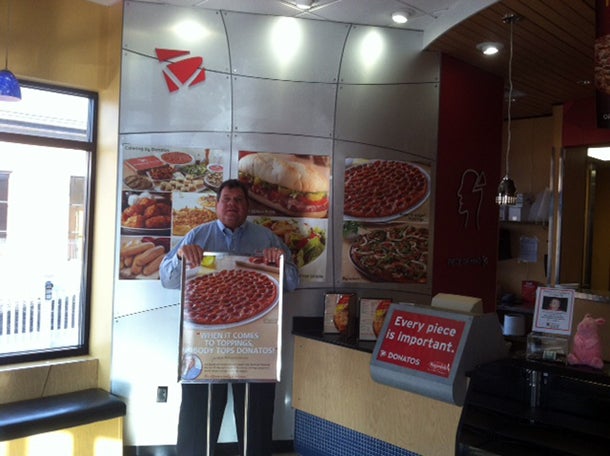 Franchises owned: Donatos Pizza (42 total locations: 16 in Cincinnati, 21 in Indianapolis and 5 in Cleveland)

How long have you owned a franchise? Since 2010

Franchising is in my blood. I spent nearly 30 years running company operations for such brand giants as Pizza Hut, Wendy’s and Tim Hortons. After years of watching -- and helping -- people realize their dreams of business ownership, I decided to take the plunge myself. I always admired the people who took the initiative of getting into franchise ownership and the satisfaction they derived from owning their own business.

I got my start in franchising with Pizza Hut back in 1982, where I spent 10 years working with the traditional Red Roof Restaurants and growing the chain’s delivery system. I left Pizza Hut and spent about four years working for Wendy’s until the chain bought Canada’s Tim Hortons in 1995. After the acquisition, I spent nearly 14 years as vice president of U.S. operations for Tim Hortons.

In 2010, my business partner and I acquired the majority share of Donatos’ Cincinnati and Indianapolis markets and transitioned the restaurants from company-owned to franchise-owned locations. Today, I run the day-to-day operations as franchisee of 42 restaurants throughout Cincinnati, Indianapolis and Cleveland.

The fast-casual pizza segment has gone from nowhere to seemingly everywhere with head-spinning speed over the past few years. And while a band of startups have been vying for category leadership, Donatos has been dominating the growing segment for more than 50 years. They have achieved pioneer status in the pizza industry as the original fast-casual pizza player.

Once I decided to become a franchisee, I knew I wanted to join a team that would allow me to capitalize on a proven history, experience and security. Donatos is a great company, with strong leadership committed to its products and its people. When we considered Donatos’ leadership, combined with its outstanding products and innovative concept, we knew Donatos would be a great partner for us.

Our situation was quite different from that of most, as we acquired 39 Donatos restaurants in the Cincinnati and Indianapolis markets and transitioned them from company-owned to franchise-owned locations. That being said, with a franchise fee of $30,000, the initial investment to own and operate a Donatos restaurant ranges from $460,000 to $670,000.

My business partner and I have been friends for a long time and have nearly 75 years of combined experience in the restaurant industry. Over the years, we frequently discussed Donatos and the pizza chain's franchising strategy. After meeting with Donatos’ leadership team, and tasting the company’s signature Edge to Edge pizza, we were interested in starting a partnership.

While it wasn’t unexpected, the amount of detail it takes to operate 42 stores can be challenging. With about 1,000 employees and a very small staff, a lot things become urgent every day. Having said that, this is what creates the level of excitement and gratification that being a franchisee is all about.

Do your due diligence on the brand. What is [your target company's] success rate? How much support will you get? How does its current franchisees feel about the brand? Last, but certainly not least, have a solid business plan and realistic cash flow forecast.

Continuing to focus on growing our relationship with Donatos. Although the Donatos brand has been around for 50 years, the next 20 are going to be much more exciting.

Related: 3 Women to Watch in the Franchising Sector