5 Ways Brands Are Using Tumblr to Stand Out

By Nate Birt May 15, 2015
This story originally appeared on Visual.ly

If you prefer your brand’s social media shaken, not stirred, consider using Tumblr. In doing so, you’ll join nearly 234 million other blogs on the platform, which has amassed more than 109 billion post since its inception in 2007, by Tumblr’s own calculations.

This social network might make headlines less often than its cousins in the space, but it has held its own ever since its acquisition by Yahoo was announced two years ago this May. Tumblr takes a blog-plus-the-kitchen-sink approach to storytelling, meaning brands have the flexibility to create their own template and engage with fans in ways that best suit their mission. As the fastest-growing network of 2014, Tumblr and its 420 million users deserve a second look. (Note for your sales team: Tumblr users have higher median incomes than those of Pinterest or Twitter users.)

With that in mind, we consulted the Fortune 500 list to spotlight interesting ways major brands are engaging fans on the site. Consider how your brand might adopt one or more of these approaches as you read through the list.

Nearly every brand recognizes the need to generate interest with bold visuals, but some tactics are more conducive to that than others. On Tumblr, one perk is that a collection of rich photos, text teasers and animated GIFs can be grouped together for a decidedly eye-catching display. If you think this sounds a lot like Pinterest, we’ll forgive you, but keep in mind you can actually post to Pinterest —- and Facebook, Twitter and Google Plus — from this platform. Moreover, brands aren’t locked into one format over another, so there’s a little more freedom to play in the architecture, even if content is similarly boxed out.

Good examples of brands embracing the unique visual opportunities here includeVerizon Wireless, which anchors its page with a simple box listing its website and social channels before delving into a sea of funny Vine videos and animated GIFs.

Meanwhile, Lowe’s takes a DIY approach to its page, offering up tips on a variety of home-improvement projects against a bold white background. 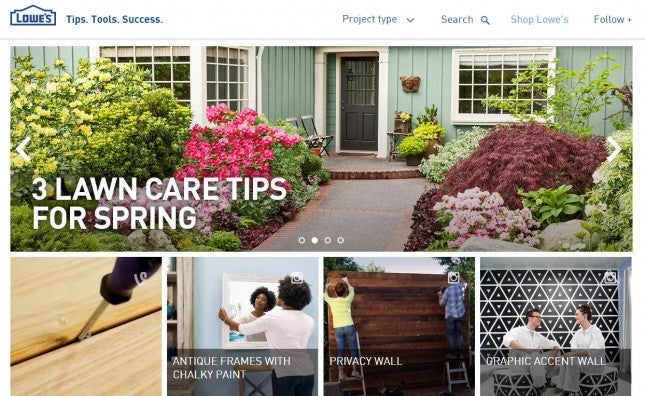 In addition to the boxed-out visuals and captions Tumblr allows, consider framing your brand with a bold background look.

Delta Airlines captures its signature image of the sky at dawn and uses it to envelop a page including media-rich posts that enable comments via Disqus, YouTube videos and links for booking flights. In addition to spotlighting incredible destination, Delta also pays tribute to flight attendants and other important airline stakeholders.

Also playing off the drama created by sunlight is AT&T, where a dramatic cityscape in the foreground is positioned against a dramatic sky in the background. Its page features prominent social media buttons and a list of clickable links including “Shop” and “News” that are displayed in a stack as if they appeared on a smartphone. Scroll down and you’ll get the media-rich scrapbook effect evident deployed on many Tumblr pages.

3. Play to your brand’s strengths.

As you’ve probably noticed, each brand finds ways to play to its strengths within the fabric of Tumblr.

Among the best examples of this is iTunes, which takes a library-like approach to its collection of music, movies, TV shows and books. Bold cover art is paired with tabbed browsing for a experience akin to perusing the stacks at your favorite indie retailer. Note that not every thumbnail is animated; instead, images containing movement are surrounded by stationary photos, drawing the viewer’s attention across the page and through each photo.

Meanwhile, IBM plays on its technological savvy to tell the story of its contest highlighting startups and their value to the economy. Check out how the brand uses bold fonts to showcase quotes against images that depict people in business suits and T-shirts coming together to learn from one another.

Related: The 11 Must-Use Social Media Strategies to Expand Your Brand

4. Engage audience in-store and at home.

Several brands use Tumblr to engage fans in-store. For example, Home Depot invites its audience to snap a picture of its signature orange buckets in an interesting place. The brand posts those images featuring the hashtag #LetsDoThis to its page. Also note the brand pulls data unrelated to its mission (e.g. the number of cups of coffee consumed worldwide each day) into its posts and uses the orange bucket to explain why viewers should care. In the coffee example, Home Depot says 20 million orange buckets-worth of the beverage are guzzled daily.

Meanwhile, Walgreens is using Tumblr to promote its new #RedNose campaign, which aims to bring hope to children in poverty, as well as to spotlight timely events such as Mother’s Day and Earth Day. Colors lean toward the pastel, fitting Walgreens’ mission as a place where fans can find comfort for what ails them and also identify products including photos and frames that help them show loved ones they care.

5. Preview the new and exciting, and have fun.

Last but not least, think about ways your brand might use Tumblr to share a hint of what’s to come. Disney, unsurprisingly, uses its page to have fun and preview upcoming films, such as Pixar’s “Inside Out” debuting in late June. The company whose bread and butter is animation also creates plenty of fun holiday-themed posts around its many beloved characters and brings them to life—within single frames or across a filmstrip-like series of squares.

Pepsi shows it can have fun with a page that is packed with animated GIFs, celebrities, cats and hashtags galore. Thus, brands don’t have to bend over backward to explain themselves on Tumblr; it’s a venue where one’s purpose, in some cases, is simply to entertain, engage and encourage a return visit.

As these examples demonstrate, Tumblr has something for everyone. Whether your brand is new or seasoned on this platform, take a few minutes to experiment. Learn to create an animated GIF. Shoot a quick Vine video and post it to your page. Let your audience see you having fun and you might be surprised how fast your following grows.

Related: How to Build a Social-Media Strategy That Works

Yahoo May Write Off $1 Billion Acquisition of Tumblr