Terrible cooks, take note: A new “smart” chef is coming to the rescue, a futuristic little oven that automatically recognizes the food you put in it and -- voila -- cooks it to perfection for you. All you have to do is rustle up the grub and turn a knob.

The Jestsons-esque mini cooking machine is called the June Intelligent Oven. It’s a quad core processor-powered computer that cooks, toasts, roasts and bakes and broils, basically without any input from you, well, other than the food itself.

Designed by former Apple engineers Nikhil Bhogal and Matt Van Horn, the touchscreen countertop cooker uses some fancy tech -- “Food ID” algorithms, an internal HD camera and digital scales in its four “feet” -- to figure out what you’ve placed inside of it, how hot to cook it to and for how long. Within seconds, it identifies the food and gets cookin’.

Related: Modernist Cuisine's Food Lab and the Science of Flavor

For a taste of what June does, dig in:

“Like cruise control on your car, June continually calculates the power needed to maintain a constant temperature,” so says the product’s website. Cooking on cruise control. Now there’s a hot mess we can get behind.

Goodbye constantly getting up to check on your food (and some of the sensual, experimental joys of cooking). Hello more of whatever else you’d like to do while it auto-cooks. You’ll know exactly the moment your food is done because the Wi-Fi-enabled oven lets you know on your smartphone. It sends push notifications to you via June’s free companion app, which -- get this -- lets you see (and drool over) a live video feed of your food as it cooks. You know, to build up your appetite and make you feel like you’re still in control. The app also invites you to indulge your forn addiction, enabling you to snap selfies of your noms and, yes, serve them fresh on Instagram, too. 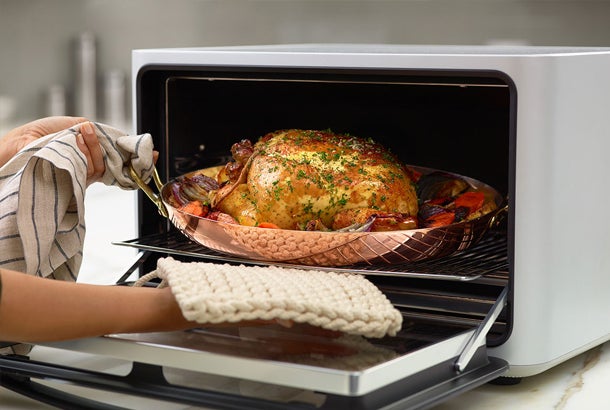 Related: This Unassuming Kitchen Tool Blocks Wi-Fi So You Can Take Back Mealtime

Rigged with carbon fiber heating elements, the gizmo heats to 350 degrees Fahrenheit in just about four minutes. As for what you can whip up with June, it’s designed to cook “pretty much anything.” Cookies, pies, meats, veggies, breads. You can even dry fruit in it, if you're into that kind of thing.

Bummer, not all foods are recognized by June just yet. The beta units, slated for release this fall, will only identify 15 commonly cooked ones to start. But its makers say the more people use it, the smarter it gets. They also plan to issue “Food ID” software updates over time. So fear not. June should eventually know that you like your ribeye roast medium rare. You’ll still be stuck on basting duty, though.

At $1,500 a pop, June’s price tag seems a touch overcooked. Maybe not if you’re a kitchen tech collector or just plain sick of burning dinner. It’s available for pre-order today with a $95 deposit. Non-beta units are expected to ship next spring, hopefully in time for glazed Easter ham. Who’s hungry?