By Carly Okyle June 12, 2015
Opinions expressed by Entrepreneur contributors are their own.

Being green is now a selling point for businesses. Some make products from sustainable materials while others work to offset their carbon footprint. One company is making an environmental and technological mark by recycling the energy lost during a cell phone’s transmission.

Nikola Labs is the company behind a cellphone case that lengthens the life of smartphone batteries by capturing unused radio frequency (RF) energy given off by the cell phone and converting it into direct current energy, which is what the battery uses.

“When you’re using your phone, the antennas are constantly transmitting data, whether that’s to a Wi-Fi router or a cell tower. The nature of the transmission is that it bursts energy omnidirectionally. It comes off the antenna almost in a ball shape,” says Will Zell, the CEO and co-founder of  the president on Nikola Labs and a self-described serial entrepreneur from Columbus, Ohio. “What ends up happening, though, is the vast majority of that energy is wasted into the environment because only a small portion is needed.”

After unveiling a functional prototype at TechCrunch’s New York Disrupt last month, the company just launched a Kickstarter campaign to offer it to the masses. Nikola Labs was able to bring this phone to market after the company formed a partnership with Dr. Chi-Chih Chen, a research professor at Ohio State University. Chen is the core inventor of the technology that allows some of the cast-off energy to be reused by harvesting it on a printed circuit board in the phone case. Zell credits the efficiency of the conversion as the “special sauce” that allows the case to be effective.

The case not only lengthens the life of your phone’s battery by slowing the rate of discharge, but it also does so without impinging on call quality. This balance, Zell and Chen agree, is of the utmost importance. When you’re not using the phone to make a call -- for example, when you’re in a subway tunnel and have no signal or when the phone is in airplane mode -- the case is especially useful. Your phone is still giving out energy, but it won’t drain your battery needlessly. For this accomplishment, Nikola labs won a Clean Energy prize for the product. “If you can save 25 to 30 percent [of a phone’s energy], it adds up,” Chen says.

“It’s an elegant solution to a problem,” says Flavio Lobato, a managing partner at IKOVE Ventures, the firm that’s financing the project. Sitting at a diner in midtown Manhattan, the group -- Zell, Chen and Lobato -- show off a working prototype, a black phone case with no visible hint of the circuitry inside that lives up to Lobato’s description. This prototype, however, is the second one. The first one was “really rough,” they say, with visible circuitry that would go on the back of the phone. Once Nikola Labs received funding for the project the team was able to embed the harvester in the case at Chen’s suggestion.

The company is currently moving into beta testing by having people try out the prototype. While Zell lives in a rural setting and Lobato is basted in an urban environment, they’re hoping to find more users to test the products in a variety of location types. 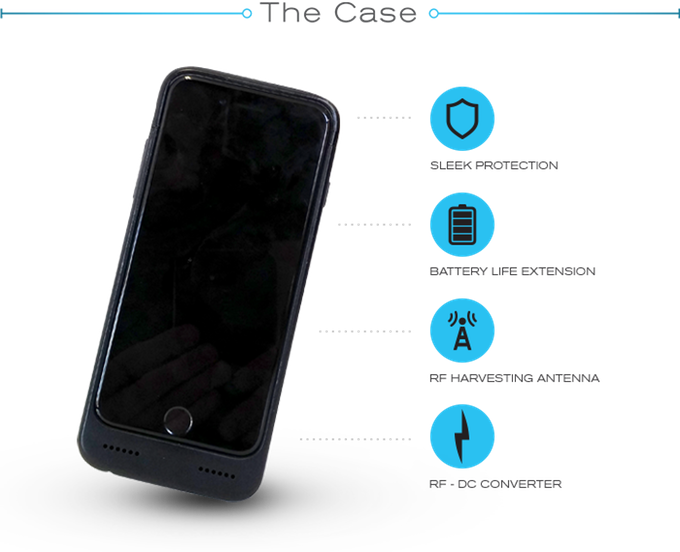 Considering the seemingly advanced stage of this product, it seems slightly odd that the group just launched a Kickstarter campaign. “It’s to launch our brand and this product,” Zell says. “It’s a market validation move.” Right now, the plan is to do direct distribution to customers for approximately $99. They arrived at that price point, in part, because the manufacturer and supply chain is all within the US.

While the team is ready to go to market with cases for both the iPhone 6 and Samsung S6 models, they’re confident they can build a solution for anything that transmits a radio frequency signal. Think: smartwatches, tablets and wearable tech. Looking ahead, Zell says the goal is to create a system of products that let you have on-the-go powering options, any of which can take between 18 to 24 months to bring to market. “Imagine something on a dresser -- not connected to the wall -- that can charge your phone overnight, like a small, elegant wifi router,” Zell says. The idea of the powering solution being built into a car is another possibility. “Our big goal with this tech is to integrate into a lot of those [smarthome] devices.”

With two provisional patents -- one for design and one for intellectual property -- this case is worthy of note and companies are noticing. According to Zell, Samsung and LG have already reached out. Nikola Labs wants to work with these providers in addition to working on their own devices, but when asked if they would work with phone case creators to come up with different styles, the responses are more cautious. “We’re not a cell phone case company,” Zell says, “we’re a wireless power company.” Yet they’re not ruling out the idea entirely.

For those of us who think the idea of a battery-prolonging cell phone case is surely the result of some modern-day sourcery, Chen, the wizard behind the invention, offers a dose of reality. “There’s no magic here, just good engineering,” he says.

Growing Opportunities For Bioavailability In The Clean Beauty Industry