From an Outsourcing Hub to $900M Market: It's Game On for Indian Start-ups

Indian gaming industry has really come of age. Having genesis in late 90s when companies like Dhruva Interactive and Indiagames started developing and publishing games, today India has more than 250 gaming companies, mostly start-ups aiming to develop the next Flappy Bird or Candy Crush.

By Sandeep Soni February 28, 2015
Opinions expressed by Entrepreneur contributors are their own.
You're reading Entrepreneur India, an international franchise of Entrepreneur Media.

In the past, India was primarily an outsourcing hub for foreign gaming companies providing game development services. It was mostly in the form of console and PC-based games that had few takers. Power issues, low smartphone and Internet penetration, let alone WiFi availability kept the industry in the “Trial version.”

“Earlier, there was no local market opportunity. It was only about doing services for global companies or making games for the feature phones that India Games and Nazara Technologies did. India didn’t have gaming as a mainstream form of entertainment,” says Rajesh Rao, Founder and CEO, Dhruva Interactive, started in 1997. However, the industry really took off from around 25 companies in 2010 to more than 250 game developers at present that are largely focusing on the Indian market. The industry today is around $890 million in size as per Nasscom with at least two companies coming up every month and growing at around 30 per cent every year.

“The growth has to do with the smartphone penetration and democratisation of game publishing. Today as an individual, you can publish a game by becoming a developer registered with Apple or Google,” adds Rao who also chairs the Nasscom Gaming Forum.

“The market is mainly mobile-driven as people don’t have access to online and console games, and mobile has been accessible to all. This has increased the consumer base and data usage very rapidly, helping the market to start maturing. Hence the number of gaming start-ups has also increased,” says Nitesh Mittersain, CEO and Founder, Nazara Technologies.

Users today can start playing games on a decent Android-powered smartphone that costs as low as Rs 5,000. Hence, the hardware drawback is gone. Also they don’t need power every time one plays games unlike for PCs and consoles. On the other hand, production cycles for console and PC games used to be longer with huge investment. Console and PC games don’t facilitate quick feedback from users unlike in smartphones where developers can get user ratings and comment on the games in a lesser time and hence can tweak the game as per users’ interest.

“Four years ago, industry analysts predicted that smartphones would be the biggest threat to handheld consoles like the Nintendo DS and Playstation Portable (PSP),” says Vishal Golia, Founder and CEO, Gamiana Digital Entertainment. He further adds, “With the lowering of historical entry barriers to game development, especially the walled gates of console gaming, Indian developers now believe that they can succeed. Foreign giants like EA and Ubisoft have had Indian presence for a long time, helping nurture the local talent. So the ecosystem is building up.”

Started in 2008, Gamiana (house of games) is Golia’s second venture - after he founded Maharaja Games in 2004 – with Vinashi as their flagship game. “Vinashi is a strategy game based on Indian history. It is the first ever massively multiplayer online strategy game (supporting larger number of concurrent players) coming out of India,” says Golia. 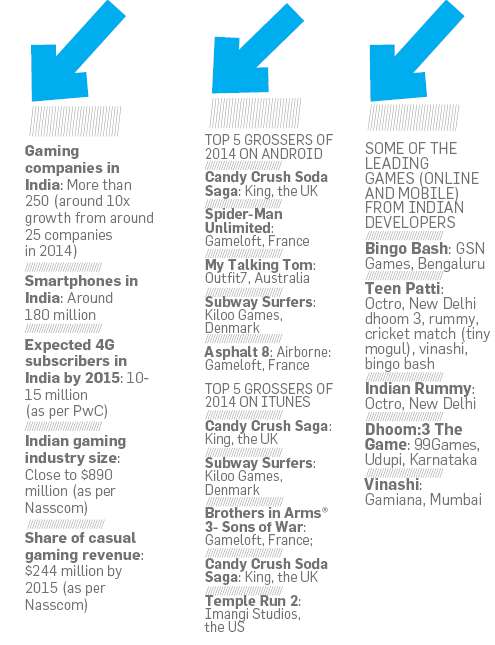 However, it is not every genre of games that these start-ups are bullish on. Arcade and casual games, which are easy to play even for a novice, are entering the market. “Arcade and casual games have the highest business potential on the mobile platform. Around 85 per cent of the market belongs to casual games like Angry Birds, Candy Crush and Temple Run,” says Delhi-based Kinshuk Sunil, Founder, Hashstash Studios.

“We started Hashstash in 2011 with PC games; but at the same time, there was a lot of infusion happening around the mobile platform and many companies were looking at mobile games, so we decided to foray into the mobile segment,” says Sunil whose finger-jousting game Circulets, started in 2013, won a couple of international design awards.

While early-stage investments have been raised by a handful of start-ups, investors remain sceptical of backing young game developers as gaming remains a hit-driven business similar to movies.

“Funding is a challenge as investors’ understanding of the sector is very conservative. VCs expect us to be profitable with a single game but that is not possible. The gaming industry does not work like the product market; it is like movie industry, which is a hit-driven market,” says Sunil.

He bootstrapped Hashstash with around Rs 1 lakh investment and is in talks with VCs to raise Rs 50 lakh. Other start-ups like Gamiana raised under $1 million in 2011 from the Indian Angel Network to boost its game development and marketing. Furthermore, Ramprasad Rajendran who co-founded Bengaluru-based Hashcube that develops casual 2D games like Sudoku Quest social networking sites and mobile platforms, raised Rs 4.2 crore from Nazara Technologies (that set up Rs 10 crore seed stage gaming fund last year) in November last year.

However, Dhruva Interactive and Nazara Technologies joined hands early this year to jointly support gaming start-ups. “Investors don’t understand gaming very well because it is new for them and a hit-driven business with a high level of risk involved. Hence, we and Dhruva Interactive came together to help start-ups,” says Mittersain. The start-ups (six-eight start-ups in the first batch) will receive six months of incubation and Rs 12.5 lakh of seed money in exchange of less than 10 per cent stake in the business.

Another area of concern is the inability of people to pay for in-app purchases and freemium models because of low credit card penetration in the country as India had 117 million smartphones in 2013 and less than 20 million credit cards in 2014.

“We have seen players making large purchases in Vinashi, however the overall paying users are very less. It is not that users don’t want to pay. It is their inability to pay due to the absence of convenient payment mechanisms. Remember credit card remains the sole payment mechanism for iOS and Android. With less than 2 per cent credit card penetration, carrier billing seems to be the way. Google has been trying to crack deals with local telecom players for a while now. So till the payment gateway hurdle is not resolved, mass monetisation in India will remain a challenge,” says Golia.

“One of the ways in which billing could be done is by integrating the carrier billing to in-app purchases, which has not been done yet. Moreover minimum in-app purchase on Google Play is Rs 55, which is too high threshold and people don’t want to pay. If that is reduced to Re1-Rs 5, then we will see a rise in micro transactions,”says Rao. 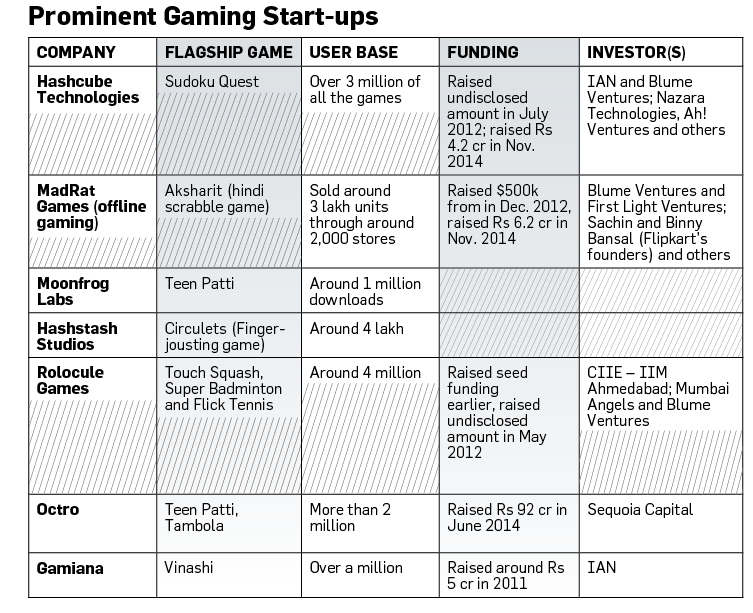 There is no one way to earn revenue from games. Once a game becomes a hit, it opens many revenue streams. While growing up, however, freemium, in-app purchases and ad-based revenue happen to be the money spinners. “We primarily make 80 per cent revenue from in-app purchases and rest 20 per cent from ads. We have about two million total users and about 1.5 Lakh monthly active users with free to premium user conversion rate of 1-5 per cent, which is at par with the average industry rate,” says Rajendran.

The rest of the revenue streams include first, distribution deals; second, selling original IP to a publisher, third; through brand licensing, for example a developer of a cricket game can name the gaming kits with Adidas and Puma and earn the licensing fee from the brands, and fourth is the outsourcing model like software services.

Hashstash is planning to release an arcade game about survival called Splash Damage soon this year and a cricket game that would be released around the World Cup this year. Hashcube is also planning a new game in March using the Quest framework and many other games this year.

There have been few successful acquisitions that have raised the bar for gaming start-ups’ potential. Indiagames was acquired by Disney for around $100 million in 2011 and Games Show Network, an American digital cable and satellite TV channel, snapped up Bengaluru-based Bash Gaming (that makes casino games for social and mobile platforms) for about $160 million in February 2014.

If the current issues are resolved, the industry can see a hockey stick growth. Mobile gaming will constitute near 99 per cent of the market as the number of smartphones will increase compared to PC and consoles. “There are lots of foreign firms like from China keen to enter India over next few years, and they will look for strong players in the local market. In order to get acquired at a larger scale, companies will have to build a large customer base and a sustainable business model as it is a competitive market,” concludes Mittersain.

Millions of Dollars and Thumb Injuries: League of Legends Champion Series Is No Game

04S On a Mission To Democratize Use Of Advanced Tech

How To Avoid Spam Calls And Focus On Important Ones