“Aha” moment: Each day, Weaver—a self-described “obsessive” with a collection from around the world—brought five perfectly sharpened pencils to her college internship. When she complained to co-workers about not being able to find good pencils in the U.S., they joked that she should open a store. After researching the market on writing tools, in November 2014 she plunked down $85,000 from her savings to start an online business. She opened a brick-and-mortar store on Manhattan’s Lower East Side this past March.

Getting the lead out: Minimal startup costs and overhead meant CW Pencil could get to the point quickly. Weaver, whose background is in production and design, built her own website and used Shopify to fulfill orders. Because pencils have a low price point, she didn’t need to make a big investment in inventory. Initially she kept her stock in a closet in her apartment. “The nice thing about pencils is they don’t take up a lot of room,” she quips.

Pencil pusher: Weaver turned to social media to spread the word. “I love Instagram. The things we sell are really basic. But a really beautiful picture, if it’s simple and sophisticated, can have a lot of impact,” she explains. “I wanted our items to look classic and beautiful, not too trendy.” Collectors and fellow “stationery nerds” quickly found her when searching online for hard-to-find items, she adds. 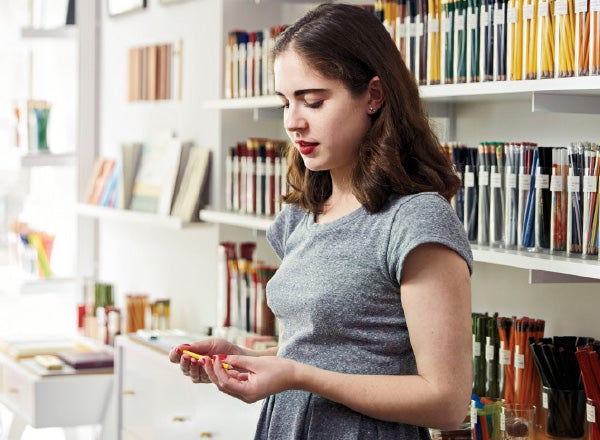 Stub hub: Strong online sales enabled Weaver to move forward with the physical store. (She declines to reveal revenue.) When she stumbled upon a tiny 200-square-foot space on Forsyth Street, she knew it would be perfect for her inventory of small things.

“A lot of our customers are people who happen to be walking by, and they come in a little surprised and amused by a shop that just sells pencils,” she says. “But we also get a lot of word-of-mouth business from journalists, designers, architects and kids coming in after school. I love seeing kids get excited about pencils. Adults remember the smell, the tactile sensation of writing with a freshly sharpened pencil. “People are so digitally involved these days; they crave analog things.”

Business is pretty evenly divided between website and store. Weaver has hired four part-time employees. “We do all the shipping and fulfilling ourselves, and write personal notes with each package. I want people to feel like they’re involved in an experience,” she says.

Write stuff: CW Pencil’s bestselling item is a Palomino Blackwing 602, a reproduction of a cedar pencil made by German company Eberhard Faber that’s known as the “Steinbeck pencil” because it was a favorite of the author. Weaver sells them for $2 each or $22 per dozen. Other popular items include Viarco scented pencils from Portugal ($8 for a pack of six) and Caran d’Ache colored pencils from Switzerland (starting at $1). The store also sells sharpeners, erasers, cases and notebooks.

Sharp-sightedness: CW Pencil has started a Pencil of the Month Club, with three-month, six-month or yearlong memberships. “We send out just one pencil in a little box, but there’s always a story behind it,” Weaver says. “We pick pencils people may not know about or ones that are hard to find, and we don’t sell them in the store until after they’re shipped to subscribers.”

Weaver wants to start designing pencil cases, because she says there aren’t any that accommodate a freshly sharpened pencil. Ultimately, she’d like to open a store in Tokyo. “The Japanese are so obsessed with stationery, and I have a lot of Japanese customers. Plus, I love Japanese pencils.”