They say you can’t teach an old dog new tricks -- and, indeed, in a tech-obsessed era where gadgets of every stripe abound, our furry friends tend to be both hilariously mystified and a little miffed.

The heated rivalry between cats and printers (and toaster ovens and treadmills), for instance, are tales as old as time -- though certain amphibians are slowly warming to the idea of mobile gaming. And as drones continue to populate our skies, it might not be regulatory tussles that ultimately ground the devices so much as weary wedge-tailed eagles.

From dogs to mice to monkeys to snakes, check out our list of 10 of the most epic encounters between animals and modern technology below:

This actually happened: A cat, dressed in a shark costume, riding a Roomba, chases a stray duckling across a Texas woman’s kitchen floor. Suddenly, a pitbull in a hammerhead onesie appears.

But perhaps most surreal of all is the fact that Elon Musk shared this video in a Reddit AMA as evidence of the impending perils of AI.

Every college student knows the agony of finishing an assignment at the very last minute and waiting, white-knuckled, for the printer to finish printing. This frazzled kitten clearly has places to be, and is having absolutely none of it.

3. A most entrepreneurial mouse

Entrepreneurs often face problems that are bigger than they are, which seem impossibly out of reach -- not unlike this adorable little mouse who stumbles upon a maddeningly king-sized cracker.

But the way that the intrepid rodent reflects, shifts strategies and returns to the challenge undaunted should serve as a lesson in resilience for business owners everywhere.

While drones continue to linger in regulation purgatory, there seems to be a consensus about how to deal with the devices among members of the animal kingdom: kill, kill, kill.

Jolly, you’re missing the point! When the Jack Russell/Papillon mix is carried onto an escalator by his dad, Dylan, the adorable pooch -- unwilling to simply coast back and descend -- continues to paw dutifully at thin air.

Related: Derby the Dog Can Now Run Free Thanks to His New 3-D Printed Legs

6. Singing husky could be the next T-Pain

Let’s be honest: this Siberian Husky is probably a better singer than you are. With a little help from LaDiDa -- a music app that autotunes users’ voices and alters background tracks to match -- Mishka is able to hit some fairly impressive high notes, and even articulate heartfelt lyrics like ‘I love you.’

7. African bullfrog is an ace gamer

Who says video games don’t encourage violence? After playing a couple rounds of Ants Smasher -- a mobile app in which players must virtually squish as many insects as possible with their fingers -- this African bullfrog finally gets so fed up that he takes a bite of his owner’s finger.

8. Some monkey business at the vending machine

Nothing’s going to come between this monkey and his tasty vending machine treats. When the machine initially seems to be taking longer than usual to process his grape juice request, he goads it on with some exasperated (and clearly helpful) banging.

Rather than running anti-virus software, when Brisbane resident Rod Thompson’s computer had a bug, he simply removed the praying mantis from his MacBook screen and returned it to the wild. 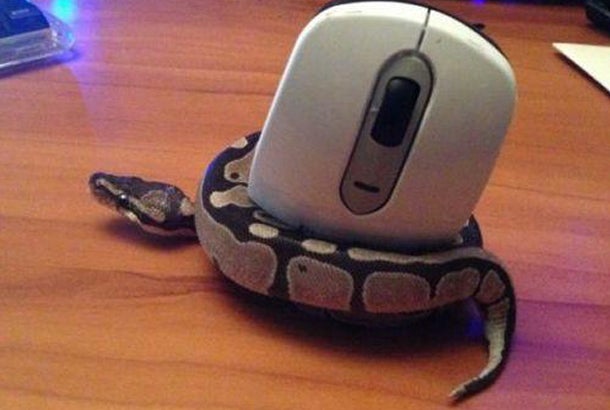 This is just plain creepy.

Related: What the Year of the Snake Could Mean for Your Business