In Windows 10, Parents Are Able to Spy on Kids by Default

Windows 10 has a new feature: a comprehensive report on your child's activity delivered weekly to your inbox which is turned on by default.

The feature is detailed in Microsoft's Windows 10 online documentation and allows a parent to "monitor [their] child’s device use with activity reports." The weekly emails, entitled "Weekly activity report for [child's name]," detail the websites they visit, which apps they use (and for how long) and how many hours a day they spend on the PC.

Business Insider independently verified that family accounts have the feature turned on by default.

One of the concerns raised by The Independent is that as children grow up they may see the internet as a place to learn about sensitive topics, such as homosexuality, and a detailed report of this activity delivered to their parents on a weekly basis could lead to trouble. 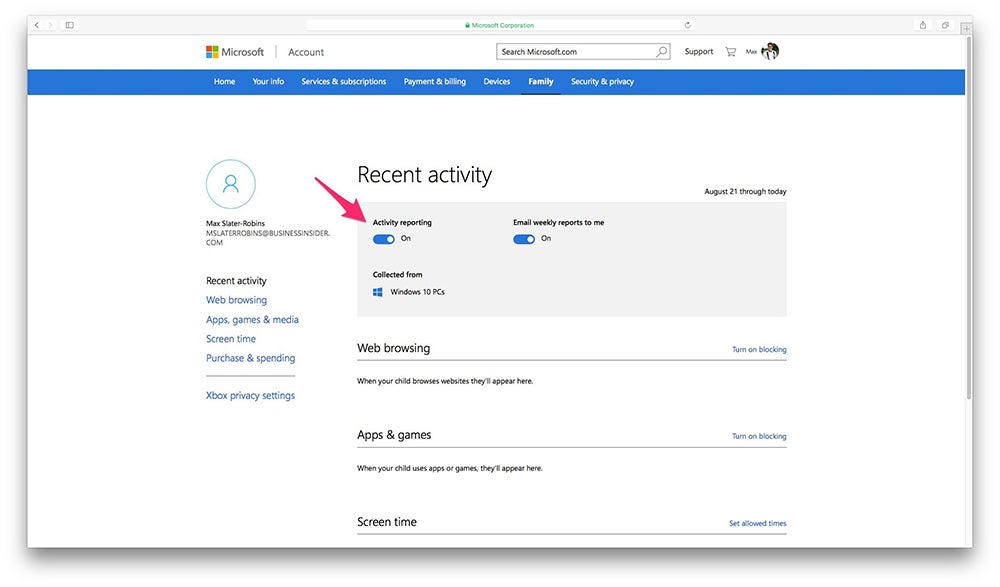 Other concerns include a lack of privacy for children even if the intentions are good.

A Boing Boing commenter warned Windows 10 users to avoid assuming "[that] your own computer has your back" after he set up an account for his 14-year-old son and received a comprehensive email detailing his son's activity the next day.

John Gruber of Daring Fireball described the feature as "creepy" while some questioned whether Microsoft still received the data even if the parents do not.

@daringfireball Does disabling those options actually stop Microsoft gathering the data, or just the reporting back to a parent?

Some users invoked George Orwell's "1984," a dystopian novel about a surveillance state with almost universal control over its citizens.

@Microsoft This "activity report" feature is straight up 1984 and could put LGBT kids in real danger. #Windows10

there are so many queer and trans kids that are going to be beaten, kicked out of homes, or cut off from support networks. thanks microsoft.

Elsewhere, torrent sites have banned the use of Windows 10 due to concerns that the operating system tracks every virtual movement. Microsoft ran into trouble when it was discovered that your PC will still upload data to Microsoft's cloud even when explicitly told not to.

Company documentation also makes it clear that keystrokes are recorded to "improve character recognition and provide you with a personalized user dictionary and text completion suggestions." Collecting keystrokes involves sending the data to the cloud to be analysed. Beyond this, Microsoft also uses contact information to "help personalize [the] experience" when using Cortana, the company's virtual assistant.