"I have cleaned toilets, mopped floors, taught swim lessons, lifeguarded and everything in between," says Bob Ryan, adding: "I was just supposed to be in charge of finance!" He's talking about his and his wife's decision to buy a Goldfish Swim School franchise, motivated by the lack of places they could find for swimming lessons for their kids in their hometown, Chicago. Ryan's allusion to finance reflects his former career as a derivatives trader. But he sounds happy at his radical change in lifestyle. He's not watching spreadsheets anymore; he's watching children's happy faces. 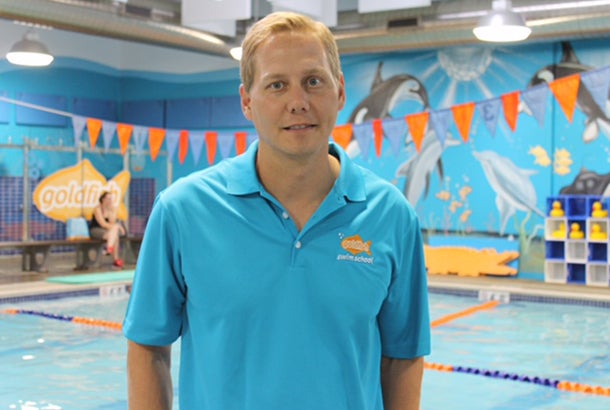 Franchising gave us the support and infrastructure to start a small business with a proven game plan and track record. From help in accessing bank financing and creating building plans to help with the curriculum and other franchise support, we felt supported all the way. We quite frankly could not have started the business without the franchise. Franchising allowed us to work directly on the business, our customers and our team, using the systems-set the franchise team had developed.

I was a derivatives trader and partner in a proprietary trading firm.

We chose the Goldfish Swim School franchise because there was nothing quite like it in the city of Chicago. My wife was searching for swim lessons in Chicago for our children and found the process difficult, with very little convenience around when and where our kids could get lessons.

We visited the facility in Birmingham, Michigan, and saw how wonderful and happy the customers and the Goldfish Team were. We interviewed existing franchisees and did months of economic analysis to see if it was feasible to bring this concept to Chicago. In the end, we believed in the franchisor, we believed in the product and we viewed swimming as the highest-priority extracurricular activity. After months of analysis, we jumped in and have been thrilled with the results.

We did extensive research on the franchise and business through existing franchisees. All were willing to share information; and, most importantly, all had plans for additional locations. I have an MBA from the University of Chicago, so I was quite comfortable doing the business plan and corresponding economic analysis. My wife is passionate about children’s activities in the city and performed due diligence on competition, pricing and buying patterns.

We relied heavily on the franchisor for the construction process, as well as the startup phase. Lastly, we had good legal counsel to help with the general business startup, and our banker was pivotal on the finance side.

Related: How Franchising Took This Business Into New Waters

The most unexpected challenges came from the construction process. Having no construction background, I really had to learn on the fly, advocate for my project and ask the right questions. We had to deal with construction delays, cost overruns and our foreman quitting due to health reasons. During this time, we had to communicate effectively to our investors to raise additional capital as well as attempt to hire talent and market to customers without an exact opening date. This was extremely stressful, but overcoming these initial obstacles and persevering through adversity proved to be tremendously rewarding.

Be humble! If there is work that you view as beneath you, buying a franchise is most likely not for you. I have cleaned toilets, mopped floors, taught swim lessons, lifeguarded and everything in between (I was just supposed to be in charge of finance!) You need to do whatever it takes to make it work, it’s your baby!

Additionally, if you are thinking about taking the plunge, it will not be easier next year or sometime in the future. There are always reasons that you can’t do it right now, but [you may be thinking that] in the future you will be in a better place to take a risk. I think the opposite is true. You will have more responsibilities, the kids will be older and you will have more obligations. If you are going to do it, be diligent about your analysis and make a decision. Don’t put it off!

We are currently working on our second location in the Chicago. It will be in the Wicker Park area and will be complete in winter 2016. After that, we plan on doing one more in Chicago and then will decide on further expansion. I like growing organically, and working with my team to achieve the level of customer service to have our customers happy and returning.

Additionally, I am consulting to help my brother-in-law open up a Goldfish Swim School in Wyckoff, New Jersey.

Related: From Iraq to Lubbock: These Franchisee-Veterans Have Found Peace, and a Focus on Kids