Uncertainty behind Success: Even the Goliaths are unsure!

By Vivek Srinivasan September 10, 2015
Opinions expressed by Entrepreneur contributors are their own.
You're reading Entrepreneur India, an international franchise of Entrepreneur Media.

Often when someone narrates the story of a start-up, the focus is more at present. Also, as you hear how things unfolded, you realize that there was a plan which was always in place. Truth be told – most of the start-ups are absolutely unsure of how things are going to progress week-on-week, leave alone month-on-month or year-on-year. The uncertainly is greater at earlier stages and diminishes as time passes by.

Also, when you come across a company that is at a place of great success today, it’s hard to imagine that the success was so uncertain. The truth is that most companies, even the very well established ones, suffer from a great deal of doubt and uncertainty. Nobody can accurately predict the future and hence, the uncertainty. There are a couple of videos that I am providing links to, which clearly show even the mighty suffer from the moments of doubt.

The first video is of Alex Schultz, Vice President (Growth) at Facebook, speaking about the growth strategies that Facebook used in its early days. He goes on to talk about the doubts that existed within the company about whether it was even possible to grow beyond 50 million users because every social network prior to them had plateaued at 50 million mark. The link to the video is here.

The second video is of Brian Chesky, Founder of Airbnb, talking about how they financed the first few days of Airbnb. The company at one point was selling more cereals (which was a marketing gimmick) than rooms. You can find the link to the video here.

These are hugely successful companies today; was there a time when they had doubts about their ability to succeed? Most certainly. I am quite sure they still have doubts today, only the nature of those doubts would be extremely different.

Take the case of Apple, which is arguably the most successful company on the planet at this point of time. Whenever Apple launches a product, there is a great deal of doubt that accompanies it. Back in 2007 when they launched iPhone, they would have been incredibly happy had iPhone sold just as much as iPod. As can be seen from the graph below, iPhone outperformed iPod sales. 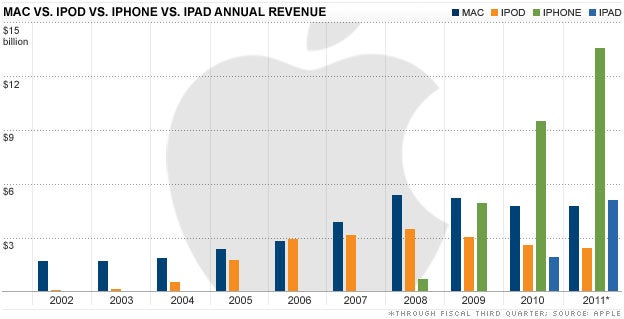 Success is about being able to push past the doubt. A true entrepreneur is one who is able to thrive despite uncertainty, work towards eliminating the source of the uncertainty, and forges ahead.