By Laura Entis September 23, 2015
Opinions expressed by Entrepreneur contributors are their own.

Uber may be the largest ridesharing company in the U.S., but in China -- where competitor Didi Kuaidi says it has captured 80 percent of the market -- it has some catching up to do.

Yesterday the company announced a new tactic for closing that distance: carpooling.

For riders, the service will operate in the same way as Uber's existing "People's Uber" service, which allows drivers to pick up multiple passengers. For drivers, it will works a little differently. Here's how Uber explains it:

Drivers sign into the app and tell Uber where they are going. We then show them requests from riders who are traveling in the same direction as well as the payment they will receive for the trip. The driver can then decide whether to accept the request or not.

The service will debut in Chengdu, China, before it's rolled out to additional cities. This marks the first time the company has launched a product outside the U.S., but in light of the increasingly competitive battle to capture China's ridesharing market, it's not surprising. 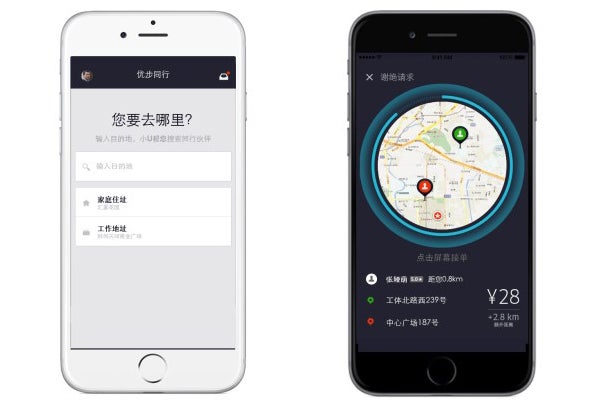 Didi Kuaidi already offers its users a carpooling service, and just last week the company announced that it will partner with Lyft, Uber's biggest stateside rival, to provide rides for consumers traveling between the U.S. and China. Starting early next year, Lyft users traveling to China from the U.S. will be able to access Didi rides through the Lyft app, and vice versa for Chinese travelers visiting the U.S., who can hail Lyft rides using the Didi app.

Uber has also been publicly revving up its China expansion strategy, announcing in June that it plans to invest more than $1 billion in the country.

Uber's aggressive expansion streak isn't reserved for China. The company will purchase the old Sears building in Oakland, Ca. and plans to open offices that will hold 2,000 to 3,000 employees in 2017, the San Jose Mercury News reports.