Chris Bauge was a success in business, having worked in several Global 1,000 companies in sales, marketing, and director positions. But he wasn't happy; he didn't have the time he craved for family and travel. His wife, Kristina's, acting career was hectic, as well. So the two chose a franchise that reflected their personal focus on fitness and allowed them to work together, taking advantage of their individual strengths: his being business, hers being people.

They chose ILoveKickboxing.com over other franchises, they say, because they found its corporate culture supportive and friendly. And, today, ten months in, they say they're delighted with their choice: They broke even within the first three weeks. They're already in lease negotiations for a second studio. And the revenue forecast for 2016, Chris says, is "seven figures." 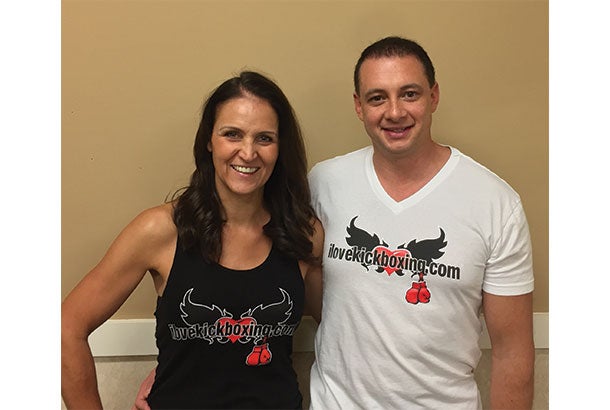 I chose franchising, as I believed it provided the ideal platform to suit our lifestyle needs and wants. More specifically, [it offered] the ability to make a healthy income while allowing us the flexibility to raise our daughter and travel, without the inherent barriers of working for a company. We originally looked at starting our own payroll and H.R. outsourcing company -- PaySecure -- but ultimately decided on franchising, as it eliminated the guesswork, hedged against numerous risks and provided a proven model and playbook to follow.

I had worked for several Global 1,000 companies in sales, marketing, management and director capacities; two of those companies were Cintas and Paychex. I also was deputy director for a multistate rehabilitation and treatment network. My wife had a successful acting career in Los Angeles for over 15 years.

A number of reasons: My wife and I wanted to get into something that we believed in and that had a purpose. With our iLoveKickboxing franchise, we can help people achieve their fitness goals and live healthier lives. We both love fitness as a lifestyle and thought, what a great way to help people, earn a great income while doing what we love. It also allowed us to work together side by side in a fun, upbeat atmosphere as well as draw off of, and pair, our strengths and personalities.

She is great with people and I have a strong business acumen making ILKB a great fit. There are many fitness franchises, and we looked into several of them, none of which held a candle to iLoveKickboxing.com. Some required large upfront investments or long-term financing on costly equipment; others seemed to allow franchise holders to cannibalize one other or had high break-even points of "800 or more members."

Why ILKB? We were impressed with ILKB’s corporate culture. Their energy and enthusiasm were contagious, and we were engulfed with it, not only at headquarters, but at every studio we set foot in; it was impossible to miss. They treat their staff, franchise holders and members like rock stars and it shows. Then there was the ink on paper: The numbers and business model made a whole lot of sense and there were not a lot of moving parts -- and simplicity is beautiful.

The ILKB corporate staff are informative and transparent, and they ruly care about the success of their franchise holders, which was evident from day one. ILKB Corporate is robust, and trumped any of the other franchises we looked into, in size, scope, expertise and involvement throughout the entire process.

The total was $191,599, comprised of: a franchise/territory fee of $49,999; buildout labor and materials, $114,800; equipment and inventory, $22,000; insurance, computers and office supplies, $4,800. I should note that the building we chose needed extensive demolition and renovation and is larger than the typical footprint for an ILKB studio.

I was introduced to ILKB by Ray Fanning with FranChoice, a franchise-consulting company. Ray pointed out some of the inherent strengths of ILKB and encouraged me to look further into them, as well as another option in a different industry he thought might be a good fit. I looked at ILKB's online reviews from customers in several areas of the country, each time coming up with the same results -- they were glowing -- and it was abundantly evident people loved the workout and environment ILKB had created.

I spoke with at least 10 franchise holders who were very happy with their experience, interactions with corporate and their profitability. Speaking directly with franchise holders, I was able to ask the hard questions and get specific. I found out that not a single location had closed down since inception. There was also one interaction that stood out: There was a gentlemen from the Midwest that wanted to purchase 10 territories, and corporate would not take his money or sell him those 10 territories, as he was unproven, which spoke volumes to me.

I did a break-even analysis, ran the numbers and was pleasantly surprised by the results. It took 200 or less members to break even. Next, I conducted demographic research through LoopNet, CityFeet.com and some other online resources in the territories we were interested in, which came back very strong. Then there was a trip to corporate headquarters in New York for Discovery Day, where I was able to meet the owner, Michael Parrella, and his extensive corporate staff.

Michael, and Scott Ferrari, the president of ILKB, also helped research the territory with a fitness and health survey on Groupon, which came back very strong. We visited several of the ILKB corporate-run locations in Long Island, New York, and met the staff, who all were full of energy and enthusiasm and were genuinely interested in us, which sealed the deal. We also researched publications and found interesting articles on boutique fitness studios reinventing the fitness industry.

Related: Franchise Players: We Were Planet Fitness's First Franchisees. Now, We Own 22 Locations.

The most unexpected and peculiar challenges came from the retail-property interaction with landlords and anchor tenants. We had difficulty putting a deal together that worked, and interestingly enough it wasn’t due to the numbers not lining up. Unbeknownst to me, many anchor tenants have their corporate attorneys carve out lease provisions that block out specific uses, and the ownership of the retail complex typically concedes to these provisions when striking deals with anchor tenants.

We found ourselves being used as a negotiating chip between the landlord and the anchor tenant at the ideal space for our ILKB in Virginia Beach. The landlord was willing to write a substantial check, and the anchor tenant was “willing” to allow us but wanted a large rent reduction on the lease they were renewing. Then, we ran into other difficulties with landlords not being excited about or open to fitness uses in general because of the “high failure rate” and extensive parking needs.

We ran into still other landlords who were antiquated in their thinking, still trying to fill their centers with “traditional retail,” not understanding market and industry changes. The other challenge, which every business faces, is finding great people. In the ILKB model, [you need] people that not only are trustworthy and loyal -- which is paramount to me -- but who also walk, talk, eat and breathe fitness and display and are naturally “wired” with the "12 out of 10" energy and enthusiasm the position requires.

Research it -- then go for it! Like anything else, there are a lot of poor franchises out there who are concerned only with taking your money and handing you a manual. There are franchises with high owner failure rates and others that allow franchise owners to build in one other’s backyards and cannibalize one other. That being said, you could do your due diligence and vet a franchise properly in the amount of hours in one work week.

Once you choose and purchase the right franchise, you have bought yourself and your family a whole lot of freedom. I can tell you I will not be missing our daughter's soccer games when she gets old enough to play, and I will not hesitate to plan a trip to Europe or a two-week cruise to the Mediterranean, all of which would have been nearly impossible working as a director or VP in corporate America. With time and money being the two most prized possessions, I challenge you to find a better avenue to gain both the way you can with a properly chosen franchise.

We are currently in lease negotiations to launch our second location. We have already greatly exceeded our personal goals in our first location and are excited to do it again. With all the marketing strategies and support from corporate -- they literally deliver pre-paid leads to our door! -- we broke even in the first three weeks of being open. Within three months, our profitability on a monthly and annual basis exceeded that of a senior vice president [salary] for most Global 1,000 or Fortune 500 companies.

The revenue forecast for our first location alone is seven figures for 2016. We hope to have all five locations up and running in the next 18 months. We are very happy, blessed and thankful to be right where we are.