After Raising $4 Million, a Bladeless Razor Gets Cut by Kickstarter

By Lauren Covello October 13, 2015
Opinions expressed by Entrepreneur contributors are their own.

The Skarp Laser Razor was supposed to take care of hairy situations. Instead, it created one.

The device, which bills itself as the world’s first-ever razor powered by a laser, had raised more than $4 million since launching on Kickstarter last month. On Monday, that run came to a grinding halt: Kickstarter suspended the campaign, claiming the company broke the rules by offering a physical product as a reward without having a working prototype.

Related: What's to Prevent Someone From Ripping Off Your Crowdfunding Campaign? Not Much.

In a note to campaign backers, Kickstarter explained that all pledges had been canceled. “We take the integrity of the Kickstarter system very seriously. We only suspend projects when we find evidence that our rules are being violated.”

More than 20,000 people had backed the project. 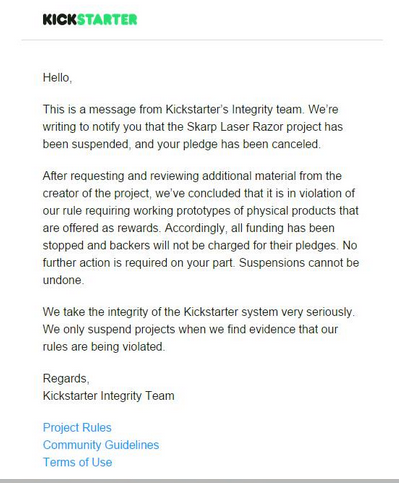 Soon after its suspension, Irvine, Calif.-based Skarp launched its campaign on rival crowdfunding platform Indiegogo, where prototypes are not required. As of Tuesday evening, the campaign had attracted $165,000 from about 1,100 people.

Skarp claims it was treated unfairly by Kickstarter, with CIO Oliver Pearce-Owen issuing this statement to Entrepreneur:

After pressure from special interests lobbying Kickstarter regarding the stage of our working prototype, Kickstarter applied a rule in a way it is not applied to others. A rule which if applied, would warrant the removal of the majority of the campaigns on Kickstarter.

This decision left tens of thousands of people disappointed.

There was little communication with Kickstarter. After being approved initially, they requested another demo, which they said “Looked great” after we posted it.

However we were suspended without any warning & have now been locked out without the chance to communicate with our tens of thousands of supporters.

Indiegogo has been incredibly supportive & communicative. It's clear they are interested in bringing exciting, cutting edge campaigns to their platform. They believe in the Skarp Razor as much as we do!

A spokesperson for Kickstarter says the company stands by its actions. “The creators of this project would be welcome to resubmit their idea to Kickstarter for review if they developed a working prototype. Or they could submit a project that is focused on developing a prototype, as long as they don't offer the razor itself as a reward.”