Interim Healthcare, a home health-care and hospice franchise that operates 300 independently-owned locations nationwide, has come under fire for a discriminatory classified ad that has outraged local legislators.

The ad was placed in a Pennysaver by an Interim Healthcare franchisee in Nanuet, N.Y. “Laid back nurse, no Haitians,” it reads, before listing off other requirements and contact information. 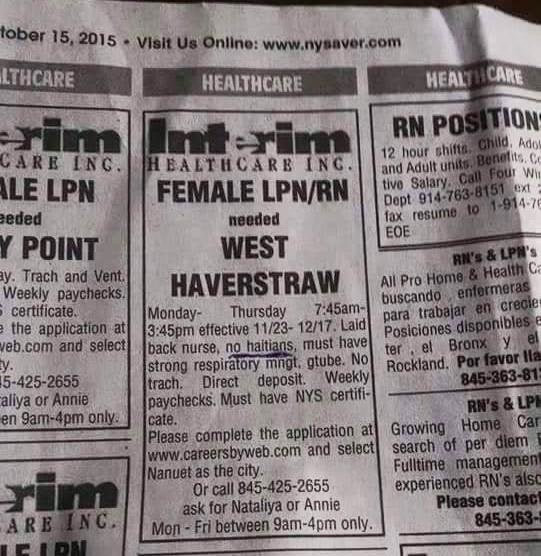 After the ad spawned outrage on social media and generated buzz among local news outlets, State Senator David Carlucci called for the New York State Department of Labor and the Equal Opportunity Employment Commission to conduct a full investigation.

Related: A Racist Sign at Sonic and 5 Other Franchise PR Disasters

“I am outraged that this help wanted ad was posted and I stand in solidarity with many throughout the community who are equally outraged,” Carlucci tweeted.

"We value the diversity of our patients and our employees. The ad in the Pennysaver for an LPN is totally unacceptable and is offensive to us and we know to all of you," Interim Healthcare president Katherine McNally said in a statement to NBC. "I can assure you that we take this seriously. Please accept our sincere apology. In particular, we apologize to the entire Haitian community."

Nevertheless, even if these views don’t necessarily represent those of Interim Healthcare, the ad illustrates the precarious way in which the actions of a single franchisee can swiftly stain an entire corporation.