There's a Disconnect Between Managers and Employees on This Subject (Infographic)

Get a glimpse of how to overcome the mental and physical fatigue that is standing between you and your full potential.
James Kosur
Editor
October 23, 2015 2 min read
This story originally appeared on Business Insider


Employees want feedback about their career paths, but their managers aren't giving it to them.

A new study from Robert Half Finance & Accounting finds that 40 percent of managers never discuss an employee's career path, even when a review has been requested.

The survey finds a lack of constructive communication between managers and employees, despite 37 percent of workers saying they would like to discuss their career paths at least quarterly.

Another 45 percent of employees want to review their performance annually to ensure they are moving in the right direction to secure promotions with the company. 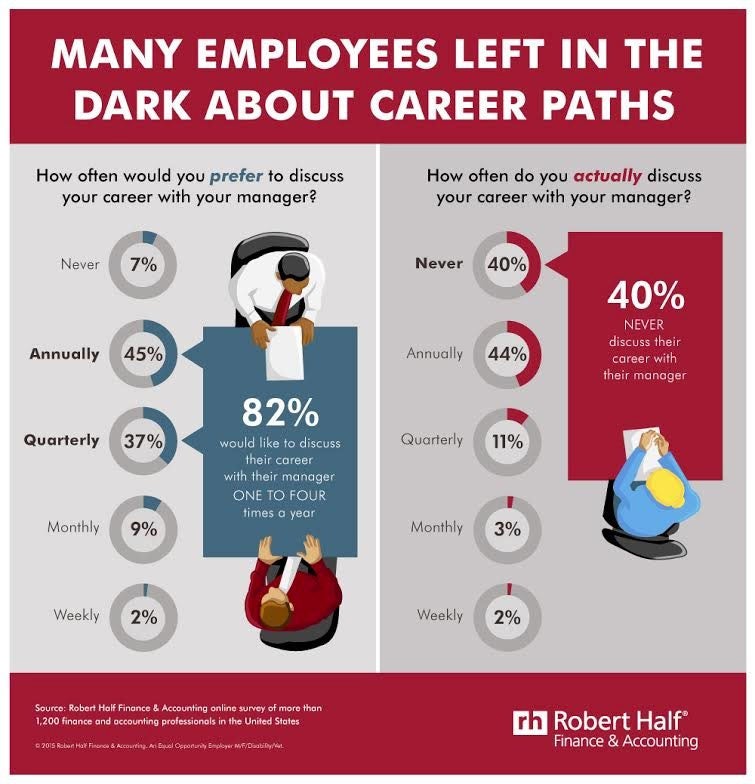 “Supervisors who are not discussing career progression with their staff are missing an opportunity to engage and retain their team,” said Paul McDonald, senior executive director for Robert Half.

“Employees who don’t know when they’ll earn a promotion or raise, or understand how they fit into a company’s long-term strategy aren’t likely to stick around long,” he added.

If You Only Take One Piece of Leadership Advice, It Should Be This

Want Brutally Honest Feedback From Employees? Here's How These 6 Entrepreneurs Get It.

5 Things You Should Never Say to Your Best Employees

What Sheryl Sandberg Taught Me About Giving Criticism