Just more than a year ago, it all started with Kashish Bhagia, a Chartered Financial Analyst who had worked for more than a decade with world’s leading financial consulting companies, as he took a plunge for entrepreneurship. Her conscientious efforts lead to the initial success of a ‘working prototype’ and thereafter it led to the alpha version of the product.

This convinced Lalit to leave his very comfortable and high paying job as VP & Digital Head at Star TV and partner with his wife. They formed Myrefers that today stands as a unique referral based marketplace for jobs powered by social big data intelligence. Pre-Series A funding by a venture capital firm had helped the duo to roll out the concept and since then it is changing the recruitment game for more than 40 clients, particularly the startup Internet companies that relate to leveraging social web technology for best-suited talent hire. Few months ago, MyRefers achieved break and confirmed social web as a successful hiring technology. 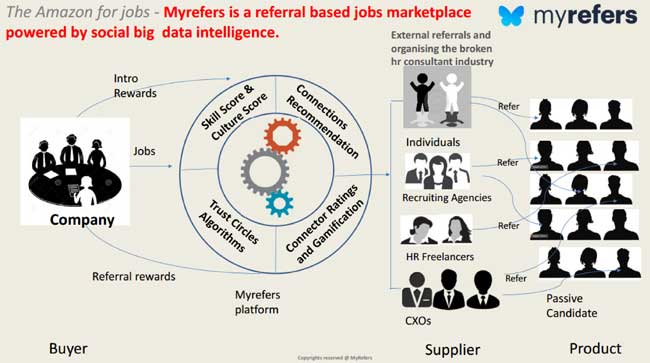 MyRefers works like an e-commerce marketplace very similar in process to commodity buying on known platforms like Amazon and Flipkart. It is helping recruiting companies to crowd-source the best quality candidates using the power of people’s social connections and databases. MyRefers is creating a network of referees. It includes individuals, HR freelancers and HR consultants who help connect the best resource pool with high quality jobs, which are then ranked for best match through patented algorithm.

It is a systematic configuration and sequence of significant amount of data collected via connectors or social scores; throwing back feedback on behavior and skills that further form a part of larger universe or ecosystem where trust, values and culture become an intrinsic part of people hiring and management later.

So while data mining at the back end works akin to searching a particular book from a said author on Amazon, involvement of human behavior, trust, values and culture in recruitment is a very abstract form, difficult to contain via mere ratings and scores. Data Science hence is helping in bridge that gap for hiring where context and relevance of connections also come into play. 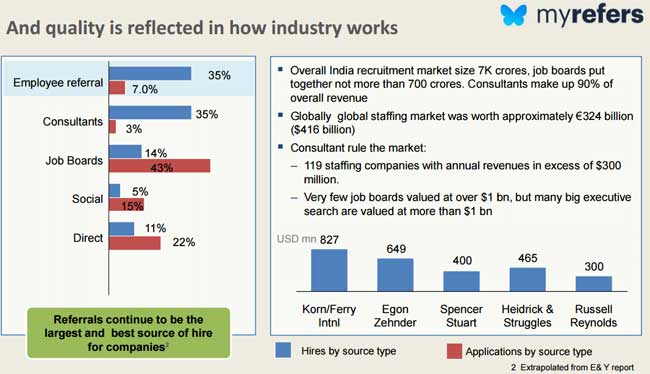 -Reaching to Passive candidates (75 per cent are passive)

While at one end, there are robust engines to gather social data, the focus for Myrefers is that the technology should enable relationship building and facilitate the hiring of high potential passive candidates. It is estimated that in a market short on candidates, with a host of competitions for particular skill-sets, the global war for the best talent is being fought out among 10 per cent of active job seekers inferring that 90 per cent of candidates relevant for a role are not engaged in job searches. So the situation is stark for companies to justify the rationale of using recruiting agencies or using traditional job boards when the efforts will still not get them the 90 per cent of non-active highly capable talent meant for acquisition.

MobiKwik HR Manager Garima Bhutani explains, “Myrefers stands out with their ability to give us highly relevant, interested and passive profiles using referrals which we don’t get through any job boards. MyRefers team has given us a very personalized experience which will make us go back to them every now and then. I am sure their approach will bring forth newer features to solve the hiring problem in fast-growing technology startups.”

MyRefers uses data mining technologies to gather everything that is required of a candidate for a role in any company-- the companies and colleges they come from, the specific kind of projects they do, the average duration in the role and so on and so forth.

This allows them to create a minimum qualifying conditions map for a role in a company. By generating this data for multiple companies and running cluster analysis on the data, they are able to group similar companies and similar candidates together. You can now do a much better match between a company and candidate for that particular role or segment of an industry.

This is what Umang Kumar, President of Gaadi.com, has to say: “ Myrefers as a new age recruitment platform works well for us especially for product or tech hires. The referral model has ensured that referrers are disincentivized to send us junk profiles that saves my team some time while skimming through irrelevant profiles. The curated marketplace model also allows the platform to rapidly scale hiring capacity for us as and when required. We closed nearly 40% of our tech hires last quarter through Myrefers”.

MyRefers has a revenue generation mechanism based on closures i.e. ‘pay-as-you-use’ for clients. Clients get to pay when a succeessful matching candidate has joined the company.  Intro Money (Rs 500 upto Rs 10,000 per job) for introducing good friend who reaches his first round of interview and secondly the Referral reward (from Rs 4000 to Rs 5,00,000 per job). This is a fee paid when the friend actually gets hired. All these are paid by the company posting the job.

MyRefers was voted as amongst Hottest 50 tech startups in India in 2014 and then amongst the Hottest 100 tech startups in India to watch out for in 2015. The startup was selected for Microsoft Bizspark Plus and Google Startup Launch programs. With a huge focus on tech, start-up and marketing hiring, some of its clients include OYO rooms, OLX, Gaadi, Caredekho, Limetray, Group M, Iprospect c2,  Groupon,  Dailyhunt, haptik, Hike,  Payu, Mobikwik, and Holidayiq.

The platform currently has  about more than 200 job openings with over Rs. 4.4 crores worth of referral rewards to be earned . So far, some more than 12 crores worth of offer letters have rolled out of the platform highlighting the fact that MyRefers grew like Jack’s beanstalk. The goose has just started to lay the golden eggs and future certainly looks bright.