Doxunity, a web portal dedicated to doctors, currently has “close to 130” users from the GCC, North African nations, Iran and Lebanon. The co-founders, 23 year-old Fadi Muhsen and 26 year-old Umair Awan, both attended Virginia Commonwealth University in Richmond, Virginia, with Awan still working towards completion. During their years at school, the duo paid close attention to the tech and startup spaces, attended events, and even reached out to CEOs for guidance and tips. Muhsen completed a BSc in Applied Economics with a concentration in Business and Finance, while Awan is currently pursuing his BSc in Information Technology.

Spreading the word among medical professionals has taken quite a lot of effort, and the co-founders see to it personally: “I’m using a very personalized marketing approach: I like visiting doctors in person at their practices at an appointed time [to allow for a] thorough explanation of Doxunity, the need and the benefits. This approach is ideal since we are still in our early stages, the direct interaction with doctors face-to-face stirs up conversation allowing me to gain their feedback. This feedback is used for further development of Doxunity, we want to build it the way doctors want it to be built.” Muhsen and Awan invested quite a bit of their own funds, and secured an injection from a Middle East investor for additional capital, and they’re looking to pitch later this year. “Since the seed funding, proper budgeting and strategizing, Doxunity evolved into an official company. We have a team of developers and a small marketing team all operating under one roof here in UAE. Day in and day out, Doxunity strives to innovate and pave the path for medical communication, collaboration and networking.”

Where did your idea come from?

As my last year in high school came around, my high school offered a unique program for students interested in medicine. After the first couple of months in the program we learned all the basics, we then moved into rotations in the hospital with physicians which was what I enjoyed the most. We took multiple pre-medical courses and labs together simply out of interest. After graduation we became extremely interested in the tech and startup industry, the competition, the ideas, disruption, the overall nature got me really excited. We began exploring and studying the MENA tech/start up industry. After visiting the Middle East, I did a fair bit of traveling, interacting, and socializing throughout the MENA region. I was searching for a gap, something that wasn’t there, a bridge that needed building. When I came back to the States, Umair and I began diligently planning, drafting, sketching and building, and keeping the healthcare industry in mind, Doxunity was born. Our mission was and is to unite doctors across the MENA region. The textbook definition of unite is come or bring together for a common purpose or action, which is what the practice of medicine is all about!

How are you marketing the community to grow it?

Since seed funding, I was able to get an office and hire a small team of in-house developers, allowing myself as well as my new partners to personally market the product to the medical community. Doctors are busy people and don’t have time to be bothered about something irrelevant; we have a very different marketing approach. We’re not selling anything, and considering doctors can sign up and use the platform for free, we’re building a network and bringing doctors together- medicine is a team sport! 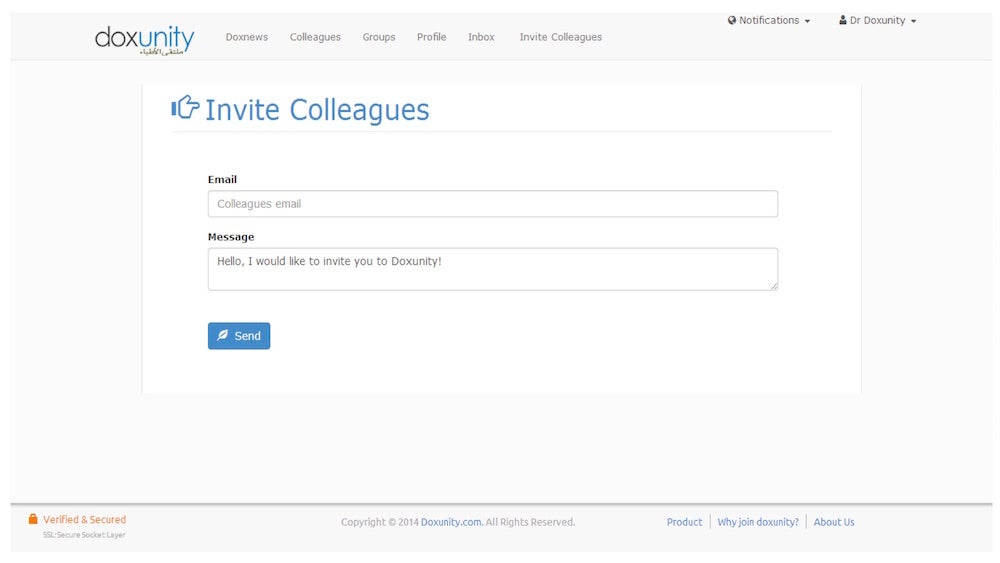 What was the most difficult part of creating the actual web portal?

The most difficult part of developing the product would be giving it the essentials unique to every doctors’ need. Since there are many different specialties and variations in age, location, language and more, there are many factors I took into consideration. How would they use the product in terms of networking, collaboration, or reaching out to one another? At that point, the only way to solve these problems was to speak to practicing doctors in different parts of MENA and simply ask! After gathering all the facts, we were able to restructure our product. Now, doctors –users- have the ability to put specific details such as, specialty, sub-specialty, geographical location, and languages they speak, which is good when needing to refer a patient, education, credentials, affiliations, etc. It’s much more specific and detailed, giving each doctor the ability to use it for what they need.

How long did the process take from inception to execution?

Inception of Doxunity was August 2013. During this time period we began doing market research, and I had visited various parts of the region, numerous hospitals, both private and public clinics, and spoke to doctors of all specialties. When I returned to the U.S., we then began product development using the knowledge and feedback gained from interactions with the doctors and tailored the product. We relocated to Dubai to headquarter the company and did a soft launch of Doxunity. We spent another couple of months studying the market and speaking with doctors. As of July 2014 we officially launched. I believe time spent on the market is critical when building a product, especially when the product is being used to produce optimal patient care.

Looking back, what should have been done differently?

The UAE is considered the Middle East’s top trading economy, and a dynamic hub for global commerce. All other things considered, the UAE won the right to host the 2020 World Expo, the first Expo staged in the MENA region. The UAE is very appealing, especially to startups looking to implement business in the MENA region, and the potential here is unmatched. This being said, UAE is not cheap nor is it ideal when you’re self-financing your company. It was tough when we first got to UAE and we managed to secure seed funding months after arriving in the region. I had gotten in touch with multiple incubators, accelerators, VCs, etc., and had meetings setup when I arrived in Dubai, but they fell through. Not one person that I had spoken to got back to me. Looking back, I would’ve come here for a couple of weeks before relocating from the United States. It would’ve allowed us to gain enough exposure in the region and potentially secure seed funding, and then relocating and moving forward at full speed.

How do you plan to monetize?

Of course we have a monetization strategy in our business plan, but since we are a fairly young company our focus as of now is to further develop Doxunity’s network as a free communication platform for healthcare professionals across the MENA region. This will allow us to build a quality medical tool, delivering faster, seamless, and secure communication, networking, and collaboration for doctors.

What setbacks have you experienced during the setup and execution of your platform?

Where do I begin? From the day, I landed nothing went according to plan. In January 2014 we moved from the Washington D.C. area to Dubai with our heads up high ready to launch the product we had invested almost everything into. Prior to coming to UAE, I had reached out to people that invest in early stage and or idea stage companies, investors, incubators, accelerators, random people from the UAE startup community. In my opinion, we had a healthy conversations with these people and they were exited to meet me once I got to the UAE. Every single one of those meetings fell through, not one person had responded to my phone calls, emails, LinkedIn messages, nothing. I even stopped by some of their offices, nothing. We got a little more aggressive in reaching out to people. I started calling medical institutions, I set up a couple meetings over the phone, showed up, waited in lobbies and the person meeting with me never showed- this happened more than once. After going back and fourth from office to office and getting absolutely nowhere, I said to myself, ‘What the hell,’ and I decided to just walk right into the personal office of the person I wanted to speak to. I finally got my face noticed, yelled at, and hey, a couple of people finally responded to my emails! I didn’t get much out of it other than that. I decided to set up appointments all throughout the day with different doctors around Dubai. As soon as I got into the room with the doctor I’d tell them about Doxunity and begin comparing to existing technology they had onsite. The feedback was indeed extremely positive and a few doctors signed up right then and there. Months went by and we began gaining traction and a little attention from the medical industry, and we’ve also managed to secure seed funding.

Editor’s Note Doxunity is a private and secure platform for doctors only, so to present visuals for this article, the co-founders created a dummy account.