By Scott Shane December 3, 2015
Opinions expressed by Entrepreneur contributors are their own.

Making money investing in early-stage companies is much more challenging today than it was just a few years ago. A key culprit has been the dramatic increase in the time it takes the average new company to go public or be acquired.

Since the end of the Internet 1.0 boom in 2001, the time to exit for the average venture-capital-backed company has more than doubled, from 3.3 years to 6.8 years, data from the National Venture Capital Association reveal.

The chart below shows this pattern for a weighted average of exits by initial public offering and acquisition annually from 1992 to 2014 (the most recent year that figures are available). The data show a trend (dotted line in the figure) that has been moving upwards since the turn of the millennium. 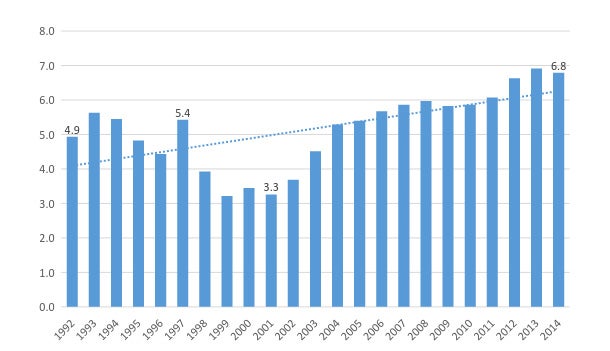 Source: Created from data from the National Venture Capital Association

This seemingly innocuous trend has profoundly negative effects on the attractiveness of investments in startups. Consider what it says about a 5X return on investors’ money. In today’s world, when the average time to exit is 6.8 years, a multiple of 5X means that the investor is getting an internal rate of return (IRR) of 26.7 percent. But back when the average time-to-exit was only 3.3 years, that 5X multiple generated an IRR of 62.9 percent.

Two other factors combine with time-to-exit to determine how much money investors make – the price the companies fetch at the time of exit, and the valuation of the companies when the financiers invest. Unfortunately for investors in startup companies, the trend in neither of these numbers has offset the adverse effect of the lengthening time to exit.

Related: Why Angels Are Moving Online

Startup investments could remain attractive despite a lengthening time to exit if the valuations of early-stage companies were to drop. But the opposite trend has happened in recent years. My analysis of data collected by the law firm Cooley LLP (https://www.cooley.com), which gathers and reports on venture capital investments, shows that the inflation-adjusted, five-quarter moving average of Series A valuations has increased dramatically, from $6.02 million in 2004 to $15.4 million in 2015 (with most of the increase coming in the last two years).

Even if the valuations of early-stage companies rise and the time it takes investments in those businesses to exit goes up, investments in early-stage companies can still remain as attractive as they once were if the companies bring investors more money at the time of exit than they once did. But that isn’t happening either. The average venture-capital-backed exit generated only 36 percent more inflation-adjusted dollars in 2014 than it did in 2001, and the amount brought in from the average exit over the 1999 to 2001 period was actually 5 percent higher than what was garnered from the mean exit from 2012 to 2014, when both numbers are measured in real terms.

This comparison might be unfair. Many observers believe that the business of investing in startups hit a once-in-a-hundred-year peak at the turn of the millennium. The combination of fast exits, relatively low valuations of seed-stage companies, and relatively high valuations of “exiting businesses,” might have been the high-water mark for venture investing.

But whether the comparison is fair or not, the mechanics do not change. The attractiveness of investing in young, private companies has declined because the average time to exit and valuations of early-stage companies have increased dramatically, while the price the average exiting startup can command has risen only slightly.

Related: Why the Number of Accelerators Is Accelerating