How an Off-Season Hobby Grew into a Slick Business

California native Brent Christensen, founder of Ice Castles, didn’t have any experience living in cold climates when he moved to Alpine, Utah, in 2000. His seasonal summer business -- a mobile lawnmower repair company -- left him plenty of time to goof off during the winter. He noticed that a neighbor was building a just-because-he-could giant mound of ice in his yard by directing running water onto a pole.

“For some reason I thought it was really cool,” Christensen says. Soon after, he started experimenting, blanketing everything from a wooden tripod to bicycles under ice. “I’d like to say the kids were in on it, but it was mostly just me. It was fun to see the ice take over everything.” The following winter, Christensen went even bigger, crafting a slide that banked off the neighbor’s fence and ended on an ice rink. “I got all this lumber and constructed a framework that was about 20 feet high. It was a massive, crazy thing.”

The experiments continued, but the spring thaw left Christensen’s yard a mess of rotted wood. In 2008 he discovered he could build a structure using pieces of ice instead of wood. “I started breaking off icicles that would be forming and then fusing them back on … using slush. That’s when all the magic started happening,” he says.

Determining that the ice could support the weight of people and, best of all, could be sculpted into complex formations with bridges and tunnels, Christensen took to building ice fortresses. “My imagination started going crazy,” he says. When locals began showing up to take a look, he realized he might have a business. 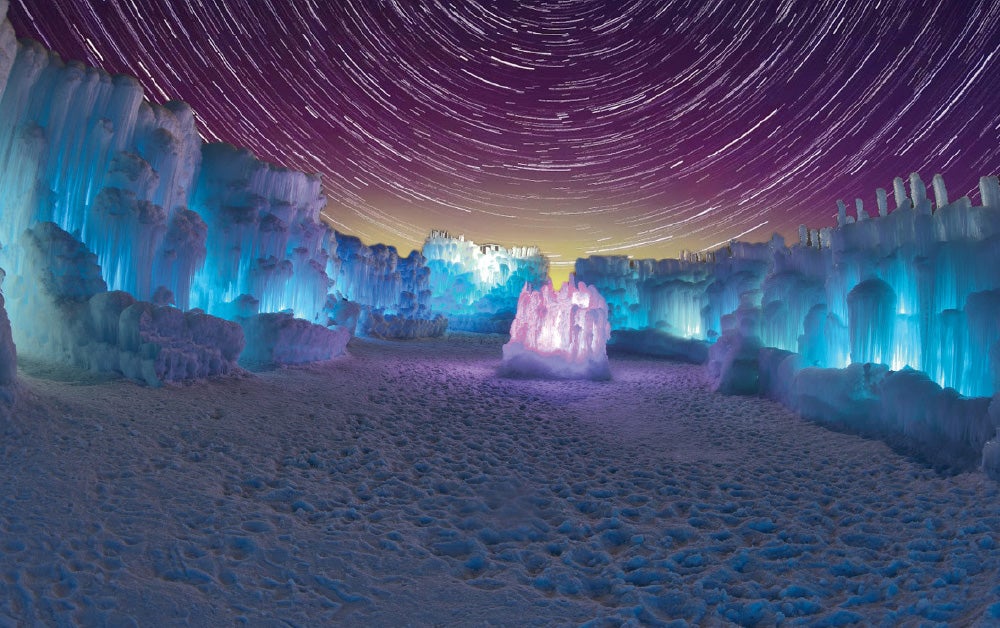 Christensen approached Utah resorts hoping to sell one on the idea of an on-site ice attraction. The only taker: a manager at a small resort in Midway who was “really out there with things he would do to promote the hotel.” The half-acre ice castle was such a hit that the following winter, Christensen was offered the Midway town square as a canvas. “It was the first real legitimate attraction we had,” he says. “About 20,000 people came through.”

Wiped out from both the physical and mental challenges of building and maintaining the castle, Christensen decided he needed a business partner. He brought in his neighbor Ryan Davis -- who had experience getting permits from cities and running companies -- as CEO and co-owner. This left Christensen free to focus on the castles as head of creative and production.

In winter 2013, Ice Castles got a gift: Disney released Frozen and, just like that, ice was hot. “That was our breakout year,” Christensen says. Highways leading to the season’s three castles backed up. Two years later, Ice Castles launched a timed ticket system. This year there are four Ice Castles: in Midway; Minneapolis; Lincoln, N.H.; and, for the first time, across the border in Alberta, Canada. Also this year, a high-end department store on Madison Avenue in New York City has hired Ice Castles to build ice structures as part of its elaborate holiday windows.

Ice Castles still uses the same (now patented) “growing” system that Christensen developed in his backyard. “If you used a frame of rebar and wood, it would be nowhere as close to the same strength, because you would have a void inside the wood,” he says. “When the water hits the ice, it melts and freezes. It’s basically a welding process.”

The castles, Christensen says, are less like buildings and more like “foreign landscapes.” The finished designs, which have both open areas and covered rooms, feature elements inspired by architecture (tunnels, caves, waterfalls and archways) and nature -- especially the hoodoos and slot canyons found in Utah’s Zion National Park. “We kind of plagiarized from Mother Nature a bit,” he says. (Though that’s ramped up with LED lights synchronized to music.)

Each site has an ice farm to grow the 10,000 icicles required daily. Weather permitting, staffers start building in November, and the structures open to the public between Christmas and New Year. About 20 employees are needed during construction, and a “couple hundred” staffers keep things running companywide until the season melts away. It costs approximately $700,000 to $900,000-plus to build each castle. Admission is $10 to $15 per person, with up to 12,000 people wandering through each attraction on a busy weekend.

“To have people come in and thank you for building it -- I can’t even think of what would be better. And you get paid for it,” Christensen says. Since he and his family bounce around the castle locations during the winter, they’ve decided to stay in a single spot during the summers -- far from the ice, on Hawaii. What does Christensen do then? He surfs -- and fixes lawnmowers.