Dad, Not the Doll, Will Determine Your Daughters' Success

By Carol Roth December 14, 2015
Opinions expressed by Entrepreneur contributors are their own.

Recently, concerned dad Joshua Rogers wrote an open letter opinion piece to his daughters on why he won’t be buying them Barbie for Christmas -- or any other occasion.

While I am biased against Barbie for a different reason -- their competitor, Integrity Toys, is my client and maker of my own Carol Roth entrepreneur action figure / fashion doll (see photos below) -- I want to tell you and other parents out there that you are completely misguided regarding any doll’s effect on a girl’s self-image and success.

Related: Billionaire Mark Cuban on Raising Kids: 'I Don't Want Them to Be Entitled Jerks'

See, kids are smarter than many adults give them credit for. They understand that a toy and plaything is not reality. No toy will have anywhere near the effect of shaping your daughters’ futures as you potentially can. 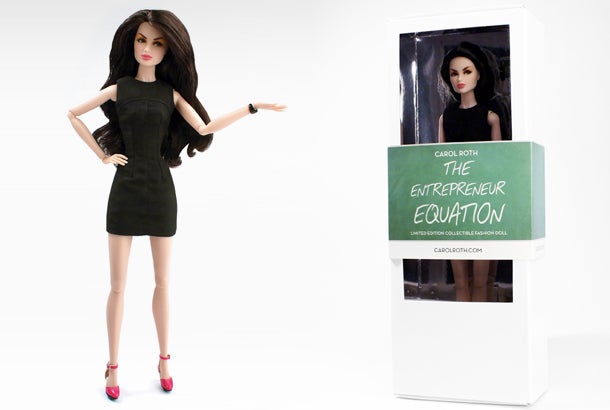 I played with many dolls growing up -- and having my own, I guess I still do. They allowed me and my friends to create a variety of scenarios that stretched our imaginations and cultivated creativity. I can never remember even one time that I or any of my friends thought that the doll was a representation of how we should look.

It was very clear, even at a young age, that the doll proportions were just that, and it never made me want or expect to grow up with a deformed waist or other unrealistic body proportions, since I interacted with real people all day long and knew the difference.

In fact, in my play with dolls, I never considered my future life because I was too busy having fun and being a kid. Except, perhaps, that after a few too many awful haircuts on my dolls, it was clear that I should never become a hairdresser.

While I’m not sure that my doll play helped my development any more than it didn’t hinder it, my father certainly played a critical role.

He never used the word “girl” around me or regarding me. He never told me that I couldn’t do something or that I was supposed to do something because of my gender.

He bought me dolls, watched football with me and taught me about financial principles. He encouraged me to do things that many girls aren’t taught to do, like to be aggressive, be competitive and advocate for myself.

He taught me about a good work ethic and how important it was to take care of myself and to be independent. He never praised me for being “cute” or “pretty”, but rather emphasized my accomplishments and character.

He taught me to use common sense and logic to respond to everyday situations. He made me be more concerned about being respected -- and respecting myself -- than worrying about being liked by others.

And he loved me dearly and unconditionally and always told me so.

These are the things that shaped me into who I am -- a successful individual who thinks of herself as a person, not as part of a gender.

There’s no doll that will shape your girls’ futures or self-esteem the way that you can, so don’t worry about a piece of plastic. I encourage you to let your girls (and boys!) stretch their creativity in a multitude of ways, including with dolls as proxies if that’s the way they want to express themselves -- maybe even with a Carol Roth doll.

In the meantime, make sure that you do your part in shaping the way that they see themselves. It’s more powerful that you realize.

Related: 3 Pieces of Advice From a Father Who Made It as an Entrepreneur

Carol Roth is the creator of the Future File™ legacy planning system, a “recovering” investment banker, business advisor, entrepreneur and best-selling author. She is also a reality TV show judge, media contributor and host of Microsoft’s Office Small Business Academy. A small business expert, Roth has worked with companies of all sizes on everything from strategy to content creation and marketing to raising capital. She’s been a public company director and invests in mid-stage companies, as well.