You Can Now Reserve an Uber Directly From Facebook's Messenger App

In an epic tech titan team-up, the world’s most popular ride-fetching app and the world’s biggest social network just announced they’re joining forces. As of today, Facebook users in the U.S. can reserve an Uber directly from the company’s Messenger smartphone app.

“Requesting just got easier,” Uber fittingly posted on its Facebook wall. “We know you love chatting and making plans with friends in Messenger. Now you can request a ride without ever having to leave your chat!” (How lazy does Uber think we’ve gotten? Apparently very.)

The move, first rumored back in July of last year, further positions Facebook as more than just the go-to platform for sharing pics, videos and status updates with friends. In the past year alone, in an aggressive drive to diversify its offerings and market reach, Facebook has integrated several other well-recognized brands into Messenger, including major hotels and retailers. 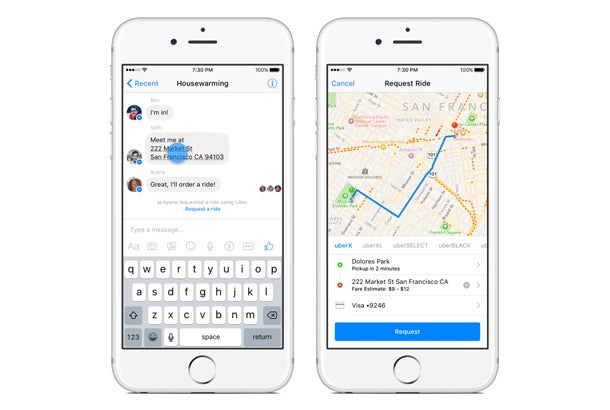 As for Uber, the tie-in enables it to mainline Facebook’s massive Messenger user base to gain new riders. The latest version of Messenger now includes an Uber button, so you can sign up for Uber, hail a ride and communicate with the driver all within the Messenger app. To sweeten the deal, for a limited time, Uber will pay for your first ride booked using the feature, up to $20.

In terms of how the integration works, summoning -- and tracking and paying for -- an Uber while chatting in Messenger is pretty simple. First, mention the address of your destination within your chat. Next, tap the address once and, done deal, you’ve ordered your vehicle. Alternatively, you can also tap the More menu within Messenger and select Transportation. There’s also the option to search for Uber and choose the car icon.

Uber is Facebook’s inaugural transportation partner, but it likely won’t be its last. Facebook made that pretty clear in the post announcing the news, in which it referred to Uber as the “first” partner of its kind for Messenger.