Flying High: These 4 entrepreneurs promise you the best of life

By Ritika Kumar January 23, 2016
Opinions expressed by Entrepreneur contributors are their own.
You're reading Entrepreneur India, an international franchise of Entrepreneur Media.

We are multiplying faster than bunnies, wanting to experience the best of life, and the world sees us as a huge market. According to Frost & Sullivan’s report, India is one of the strongest markets for private jets with expanding business interests and increasing number of billionaires.

The private jet market in India makes up for 12 per cent of the global market. However, poor infrastructure, high taxation and negligence by the government are acting as villains in the industry’s happily-everafter story. Working against all odds are these entrepreneurs who see the sunshine and are all in to earn profits.

Putting Maximum People in The Sky

JetSetGo’s Kanika Tekriwal aims at bringing total transparency1 to her customers with zero harassment from intermediaries. “At JetSetGo, we do not recommend aircraft best suited to our needs (financials and ease) but aircraft best suited for customer’s needs. We do not present scarce availability or artificial demand but market availability as it is at the same time decreasing the empty flying time you incur on an average charter,” she says. 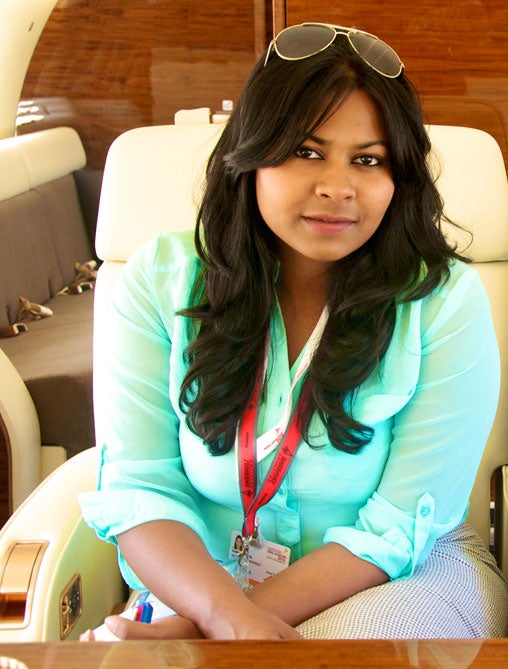 Tekriwal, a cancer survivor, doesn’t believe in giving in. She sensed that the customers wanted a comprehensive platform that would give them variety of aircraft at transparent prices.

“When I say transparent we mean to give them details of aircraft available, their safety conditions and amenities onboard, to help them make an informed opinion. There have been occasions when we didn’t have the right aircraft and we had to say no,” says Tekriwal.

JetSetGo sells empty legs at as high as 80 per cent discount to increase the number of fliers. “Since we are directly in touch with aircraft owners, it gives us the freedom to provide customers with price negotiations and get value for money. The idea is to put more and more people in the sky and give them the taste of our services.” she says.

Tekriwal’s target is the customer who is looking for discounts. “Around 40 per cent of our customers are those who would be negotiating. Our idea is to give them what they want and secure them as our customers. Luckily, people who have flown with us once have come back,” she says.

JetSetGo has been a profitable journey for Tekriwal, thanks to the ultra HNIs whose major concerns are safety and luxury. It has been tying up with luxury forest resorts and boutique hotels to give unique experience to their customers. “Future lies in customization. We have been working with consultants from Middle East and Europe to come up with new additions.

We launch a new product every month. I believe India will be a game changer because here we have the liberty of flexibility, and there is a lot of scope adding to the customer base,” says Tekriwal.

“It is a new concept to see private jet as a luxury and leisure product. It also stands for time optimization. Businessmen have realized that they cannot rely on scheduled airlines. That’s where we come in to help them manage time,” says Rajeev Wadhwa, Chairman and CEO, Baron Luxury and Lifestyles.

First generation entrepreneur Wadhwa has found his market among the country’s rich and their need for best in luxury. His company is constantly thinking about different concepts like honeymoon package on a private jet, couples getting married in the sky, teenagers taking their friends to tourist destinations to celebrate their birthdays, kitty parties for women and couples, group of friends going for a casino round to Kathmandu, remote spa destinations and private jets for weddings. 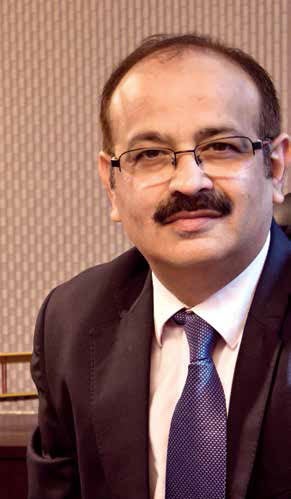 While people on board are given a taste of ultra luxury. From Versace linen to specialized chefs to personal business assistants, Baron swears by proper customizations for ultra HNIs. Wadhwa came up with Baron Eagle a unique “invitation only” membership program that gives corporates and crème de la crème of the society to get aircraft ownership experience.

As a member, you get access to the largest fleet of aircraft in India. “It has been a very successful initiative as we got engage with our customers for a long term basis,” he says.

Wadhwa sees aggregation in the future of private aviation industry. They recently went online with bookmycharter.com by creating a marketplace of private jets and air charters for customers. “I bought underutilized capacity of aircraft with multiple operators, which did not have sufficient clients.

They were big enough for me to create my own platform. It was an outcome of 15 years of experience in the telecom industry,” says Wadhwa, who is a self-confessed serial entrepreneur and gets a kick every time he starts a new business.

Adapting to the change

As per Vinit Phatak, who founded Vision Air in 2007, it would have been be severely difficult to sustain a viable business if they were to stick to air charter services as a primary source of revenue.

So they decide to expand their portfolio. Today they also deal in aircraft sales, aircraft management and aircraft maintenance. Phatak is a first generation entrepreneur who studied philosophy in Pennsylvania and also learnt nuances of engineering as a part of the course. Philosophy helped him find his core and become an entrepreneur.

“I realized that I wanted honesty, integrity, transparency and help lots of people along the way. Entrepreneurship gives me an opportunity to create something new and help people too,” says Phatak.

He tasted success with his Invasion Group that deals in telecommunications and marine safety equipment manufacturing. Although he may face difficulties, Phatak believes aviation has the potential to become viable industry just like telecom.

There major revenue comes from selling aircraft. Invision Air boasts of being an active part of international private aircraft market. They promise to handle the export process, identify the best buyers through their extensive network of global partners and ensure a thorough, well-planned sale.

Their owner member program helps aircraft owners to enjoy the maximum optimization of their planes as Invision Air takes the responsibility of their complete management in keeping the international standards. You could also lease out your plane to them on a revenue sharing basis.

Phatak believes that customer awareness is at dangerously low level, and to create more fliers is no profit exercise. So he strikes the rich in the small cities who would eventually buy private planes. “You are never going to earn money from low end customers.

We are looking at people who have flown anywhere between 25 and 400 hours, and understand the benefits of having a private aircraft,” says Phatak. They operate from Nasik and Ahemdabad, apart from Delhi and Mumbai.

Established in 1973, STIC travel group is a renowned name in the industry with operations in hotels, tourism and aviation. Air Charters India, a part of the group, recently became a separate entity under the leadership of Captain R Puri.

“The vertical was ignored for a long time. Just recently, we started developing as a one-stop shop for tour operators, government agencies, corporates and HNIs, to travel to remote areas in India and south-east Asian nations,” says Puri. Puri and his team were focused on marketing Air Charters India as a product necessary for everyone.

“Our Chairman (Subhash Goyal) is a known name in the industry and has made it possible. He make sure that the biggest names in the country use the product to create a name for the group,” says Puri. “There are around 400 airports under AAI (Airport Authority of India). Some are under navy, air force, army, state governments and some are privately owned but we make sure that we get proper permissions from all of them to deliver the best to customers, further says Puri.

Air Charters India’s USP is its pan India reach. They have 40 offices in India and 40 abroad. Apart from that they swear by almost 100 percent dispatch rate, security, privacy and flexibility. Since private charters for personal usage is less in demand, Air Charters ventured into corporate packages, medical evacuation, relief operations and political movement to keep their business afloat.

“It was important to add to services to not only keep the business afloat, but also make it profitable,” says Puri. Puri is hopeful that with FDI coming in India, more corporates will come in, which will lead to more business. With more than two decades of experience in the aviation industry, Puri believes that perseverance pays.

“It is a challenging field in terms of regular inflow of revenue but you got to stick around because there is so much scope. More and more people will fly, and you can just add to the demand by making people aware,” says Puri. “Don’t enter this field for a short term, be there for the long haul because there are rich dividends in the end,” advises Puri.

(This article first appeared in the Indian edition of Entrepreneur magazine (January, 2016 Issue).