April Porter worked as a government prosecutor in St. Louis prosecuting the "worst of the worst" sex offenses and homicides against women and child victims. Hers was a job that presented new horrors every day.

After prosecuting some of the most egregious offenders in her area, Porter had had enough of her draining and dangerous work. Following one particular case, she had even received death threats and required 24-hour police protection.

She started thinking what else she could do -- and found it. Fitness had long been a passion. Porter had actually taught weekly fitness classes alongside her prosecuting duties. Discovering that friends of hers in Kansas City were happy running a 9Round fitness franchise, Porter began to envision a future in which she could "help each person that walks through my door" in ways she'd never been able to help all those sad, traumatized victims of crime. 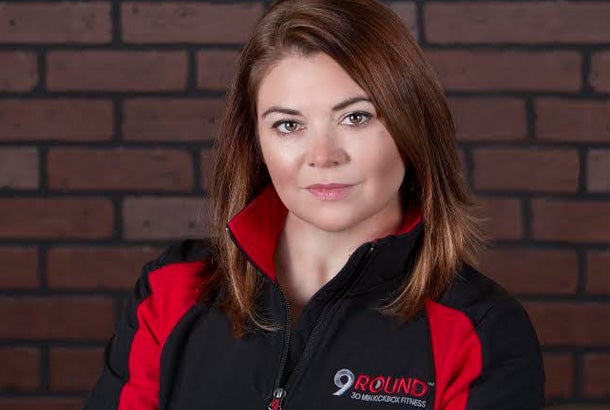 Image credit: April Porter
Name: April Porter
Franchise owned:  9Round Wildwood and 9Round Creve Coeur, both in St. Louis, Mo.
How long have you owned a franchise?

Franchising offered the opportunity to own a business where someone else had experienced the trials and errors and eliminated the errors. I was able to come into the business and implement the best practices, making success a much faster reality.

I was a criminal attorney working for the government. I prosecuted the "worst of the worst" sex offenses against women and children and homicides.

I have always had a passion for helping others improve through teaching and fitness. Throughout my legal career, I taught fitness once a week as my “hobby.” It was a time when I didn’t think about all of the stress of my day job and was 100 percent happy in what I was doing. When I learned about 9Round, I realized that this was an opportunity to take all of the analytical and problem-solving skills I used as an attorney and combine them with my love of fitness and changing lives. It has been the perfect fit.

What I have learned since opening 9Round is that I help so many more people now than I ever did as an attorney. As an attorney, I was on damage control. I couldn’t change what had happened to the victims, I could only hope to hold the person responsible for their pain accountable. Now, I help each person that walks through my door. I improve lives and spread happiness. This is the best job on earth!

I had friends that had opened a 9Round in Kansas City. I still seek their input on day-to-day operations. I also spent three months working with the franchise sales person, asking lots of questions in true attorney-style. To determine what questions to ask, I read franchising books and consulted a franchise-attorney friend of mine. I Googled all of the main players involved in the company and vetted their backgrounds. Finally, I attended Discovery Day and met the CEO and COO before making a decision that I wanted to invest my money.

We didn’t realize how slow commercial real estate negotiation could be. We faced delays in finding our first location. Also, finding the perfect employee that you trust to deliver your message, your service and your quality standards is difficult, but worth the hunt.

Owning a business is a 24/7 proposition. You must live, breathe and bleed your brand to be truly successful. So, be passionate about the service or product you are providing to your customers. Don’t buy a franchise because it is the “next big thing,” and you believe you can make a lot of money doing it. Passion will be the difference between having a “job” and having the lifestyle of your dreams.

We just opened our second location in June 2015 and plan to open number three by the end of the year. Go big or go home!

Related: This Man Lost Weight and Found a Career in a Fitness Franchise