By Sandeep Soni March 19, 2016
Opinions expressed by Entrepreneur contributors are their own.
You're reading Entrepreneur India, an international franchise of Entrepreneur Media.

The impact of B2C e-commerce revolution in India has quite encompassed even its relatively poorer and lesser known B2B cousin. This is to the extent that in the past two years, the segment has evolved from a few directory services like IndiaMART to a pure e-commerce play where aggregating industrial products online is the largest pie of opportunity.

Unlike B2C e-commerce, B2B has been slow in picking up with only as early as in 2014 when it started seeing some startup action with few exceptions like Power2SME, which was launched in 2012. While the segment hasn’t been as glamorous as B2C, the ease and trust of buying online with on-time deliveries have already reposited the faith of both suppliers or vendors and buyers.

What’s even more underscoring is that more than 90 per cent of B2B retail is unorganized where roughly 50 million Indian SMEs usually remain at the receiving end when it comes to procurement of industrial products, nothing less than a nightmare.

In addition to that, with Make in India as government’s centerpiece of growth, young startups are tapping into the segment by aggregating different vendors to be the one-stop shop of industrial goods for SMEs and even large buyers.

“Today B2B is where B2C was five-six years ago. The presence of B2C online in a large measure has allowed all of us to test buying B2B goods online. These start-ups are leveraging the same infrastructure created to support B2C e-commerce. So, its growth will be much faster than B2C,” says Nilesh Kothari, Managing Partner, Trifecta Capital. The venture debt firm invested Rs 12 crore in Industrybuying, an industrial supply aggregator in January 2016.

Within industrial products, while startups like Industrybuying and Moglix serve across categories, others cater to sub verticals in the segment. For example, Buildkar caters to construction material, Labbazaar to lab supplies, Bizongo to chemical, plastics and packaging segments, even as each of the segment is highly fragmented.

Startups aggregate vendors (both corporate and small traders), and as per buyers’ requirements find the right vendor to buy from in terms of matchmaking, offering the most competitive pricing. However, buyers can do it all by themselves.

This removes the middlemen, reducing the price of total purchase order by 5-20 per cent while startups take a cut of 5 percent that can go up to 50 percent as a commission from vendors depending on the products.

For products like cements where the volume is high, the commission is in single digit while for categories like bathroom fittings the commission is high because of low volume. Similar to other platforms, industrial products aggregators offer COD deliveries as well at a nominal charge.

“There is a nominal charge of 3-5 percent for delivery. In first six months, all our deliveries were COD, but currently it is less than 40 per cent. We have seen customers making Rs 90,000 or a lakh in payment online, which is surprising. This is because they trust the online model now and also there is price differential of 5-12 per cent when compared to offline purchases. That is a big number as the deal volume is very high,” says Vinit Bhansali, Founder, Buildkar.

But there are categories like lab supplies whose availability in itself is a major challenge as offline stores cannot keep the entire range of stocks and that delays the procurement by weeks. Hence, pricing is not quite competitive in such categories.

“It is very inconvenient for brick and mortar sellers to maintain all kinds of stocks particularly in Tier 2 and 3 cities causing non-availability of such goods. We solve this problem by maintaining inventory for pan India and that is a bigger issue. Hence we are not able to keep aggressive pricing,” says Rahul Gupta, Founder, Labbazaar.

Not only the costs are lower for buyers, the margins for these aggregators are much higher with generally higher volumes along with average ticket size being larger as orders are mostly purchased in bulk. This makes these B2B aggregators more sustainable businesses being built from the ground up and hence they are profitable. Discounts are just a time-bound strategy to drive sales. This is in contrast to B2C players that sell products below its cost while surviving on discounts.

“Last year, we had around Rs 20 crore in turnover, while we have been profitable since second month of our launch in October 2014. We have been very cautious about burning cash early on,” says Bhansali. The start-up currently offers discount if buyer buys another product along with cement.

“I’m not sure if discounts are sustainable for these start-ups because order sizes are very large. So they have to sustain without discounts,” says Umang Kumar, President, CarDekho.com & CEO, Gaadi.com. Kumar co-invested an angel sum in Buildkar in January 2016.

Among the most acute challenges is streamlining front-end and last-mile logistics as deliveries take place in either factories or warehouses or the construction sites, which cannot be done through typical e-commerce logistics. Until there are logistics firms specializing in B2B e-commerce, these aggregators will have to rely on traditional logistics players such as DHL and FedEx used by their vendors or third-party logistics for deliveries.

In a typical order, the closest vendor or supplier to the buyer’s place for delivery is located to reduce cost. “Unlike B2C, where there are probably two-three items in a single order, the number of items can go up to 200 in B2B, so breaking that order into multiple shipments is a challenge,” says RahulGupta, Co-founder, Industrybuying.

The startup has fulfillment centers in areas where vendor-concentration is high such as Delhi, Pune, Bengaluru, Chennai and soon to open in Ahmedabad. However, return shipments are negligible, probably 1-2 percent, so reverse logistics is not much of an issue.

Another significant problem for startups is to offer credit facility to SME buyers as traditionally they have been accustomed to buying goods on credit particularly when the order value runs into lakhs of rupees.

To facilitate credit, start-ups are tying up with NBFCs or SME lenders, etc. “When average order size is around Rs 5 lakh or above, the buyer makes an advance payment but if it goes up for example Rs 10 lakh or beyond, the buyer looks for credit. So we are planning to tie-up with SME lenders in the market. However that kind of order size is very less,” says Aniket Deb, Co-founder, Bizongo.

The kind of funding that has gone into the B2C market is unlikely to go into the B2B market as there are already some unit economics in place. Most importantly, B2B will be playing on B2C strengths and doesn’t have to build an industry from scratch as B2C did half a decade back. Nonetheless, large players in each sub-verticals will emerge and this will lead to consolidation too but it is too far as of now. 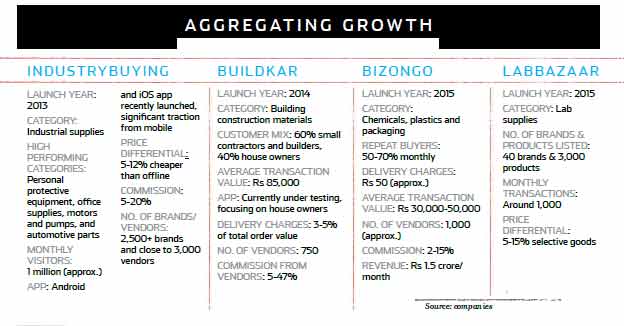 (This article first appeared in the Indian edition of Entrepreneur magazine (March 2016 Issue).

7 Lasting Lessons I Learned from Steve Jobs, 10 Years After His Passing